Pinnacle plugs into the new power of wood

As the name suggests, Pinnacle Renewable Energy Inc. is in the energy business. But it can also be considered a forestry company, because it has created an extra link in the value-added chain for the B.C. lumber industry.

Many British Columbians will remember beehive burners, which pumped tonnes of carbon and ash into the air by burning sawdust and other wood waste from sawmills.

Those burners have disappeared from the B.C. landscape thanks in no small part to companies like Pinnacle, which has turned that wood waste into a commodity: compressed wood pellets.

“It’s another revenue stream for the sawmill,” said Pinnacle CEO Robert McCurdy. “Before, you’d have the maintenance cost of the beehive burner. Now we come and pick it up from them and pay for it.”

The company started with a single pellet plant in Quesnel and is building its seventh in Lavington in the Okanagan – at a capital cost of between $40 million and $50 million – in partnership with Tolko Industries Ltd., which has a sawmill in Lavington.

“Anything that we can do to derive extra value from the co-products that we produce can certainly help the competitiveness of our sawmill industry,” said Michael Towers, Tolko’s manager of energy supply and systems.

Pinnacle also recently invested in a new shipping terminal in Prince Rupert that opened in December, an investment that McCurdy said exceeds the capital cost of the new Lavington pellet plant.

Pinnacle was founded in 1989 by Rob and Jim Swaan, who are still part owners. However, the Swaan brothers did not start out in the forestry business. They were farmers.

Initially, the company was called Pinnacle Feed and Pellet because the mill they ran initially produced animal feed. But they realized that the same process for compressing animal feed into pellets could be used to create wood pellets from sawdust, which at that time had little value. In fact, it cost forestry companies money to get rid of it. 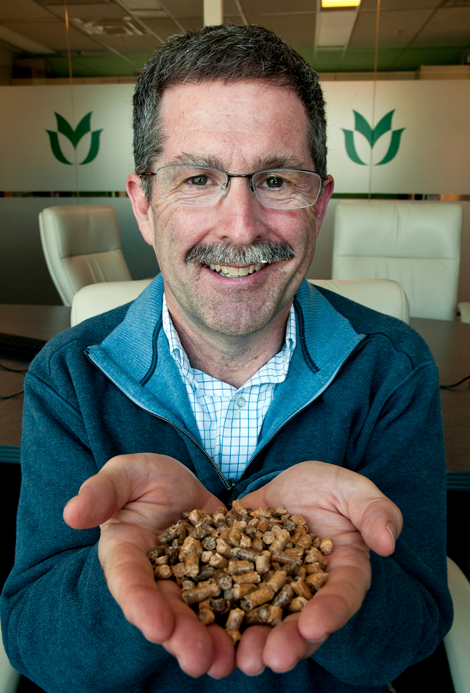 Over the years, it had added five more pellet plants to become the largest wood pellet producer in Canada and the third-largest in the world. Its growth has been partly financed through ONCAP, a small- and mid-cap venture capital firm – Pinnacle’s largest shareholder.

Because they’re absorbent, the pellets are used in horse stalls as bedding. Another market is gas stations and the oil and gas fields to soak up fuels in the event of a fuel spill.

But the biggest market is energy. Power utilities account for 60% to 70% of Pinnacle’s business. The single largest market is the U.K., where some power plants have been converted from coal to biomass.

The wood pellet industry is not without its critics. In 2011, Greenpeace published a scathing report that slammed provincial governments that have opened forests to harvesting to feed pellet plants and bioenergy projects. Greenpeace said the only way the industry can claim to be sustainable is if all the feedstock for bioenergy comes only from wood waste.

McCurdy said a small percentage of the raw material for its pellet plants comes from low-quality trees, which he calls “bio-logs” – the kind that have no value as sawlogs or even pulp logs. But he said the amount of wood fibre that would come from standing trees is less than 10%.

“But the majority of ours is waste from sawmills,” he said.

Wood waste burned as an alternative to coal is considered to have a lower carbon intensity because it uses an energy source that would otherwise be wasted. It can also be considered renewable, if the trees from which the wood waste comes are replanted.

Pinnacle has grown over the years to the point where it decided to invest in a new terminal in Prince Rupert, which gives it access to large Panamax cargo ships.

And because many of the company’s plants are in B.C.’s north, shipping through Prince Rupert reduces transportation costs.

Pinnacle is now shipping 1.2 million tonnes per year of product.

When the new pellet plant in Lavington goes into operation in September, it will add 250,000 tonnes of production capacity. •