By Hayley Woodin | August 25, 2015, 6:00am
Jim O’Rourke, president and CEO of Copper Mountain Mining Corp., says his company has become a “stable ongoing operation that we feel comfortable with, even in these volatile markets | Photo: Chung Chow

In terms of how quickly Copper Mountain Mining Corp. (TSX:CUM) took its Princeton mine site from exploration through to production, it’s a “bit of a record,” said president and CEO Jim O’Rourke.

“We started with nothing in 2006 as a little private company, and then built the $430 million construction project, and then last year the $40 million crusher,” O’Rourke said. “We’ve now built it into a stable ongoing operation that we feel comfortable with, even in these volatile markets.”

Acquiring the 18,000-acre site located a 75-minute drive south of Princeton was more like a re-acquisition for O’Rourke. In 1988, he had a hand in purchasing Copper Mountain from Newmont Mining Corp., and he successfully led operations under Cassiar Mining Corp. – later Princeton Mining Corp. – until 1996, when volatile copper prices and outdated equipment fuelled O’Rourke’s decision to sell.

A decade later, rising copper prices and the opportunity to further develop the resource-rich site were a prospect so good it pulled him out of retirement. Less than six years into his latest venture, all major capital investments at Copper Mountain are complete, and O’Rourke said the mine is meeting and exceeding its design capacity.

“Our biggest compliment: we had one of the international mining companies come to us and wanted to bring their development team to the site to see how we could do it on time and on schedule. And as they told me, they never meet their budget or their schedule,” he said.

Developing the site as a brownfield project – with water licences, certain facilities and the existing mining licences already in place – has contributed significantly to Copper Mountain’s ranking as one of British Columbia’s top 10 fastest-growing companies for 2015.

“We had a pretty good idea of the facility but recognized we had to have all-new mine and all-new processing equipment,” said O’Rourke, who added that a key strategic partnership with Japan’s Mitsubishi Materials Corp., which purchased 25% of the project and arranged all necessary financing, has been “extremely valuable” to Copper Mountain’s success. 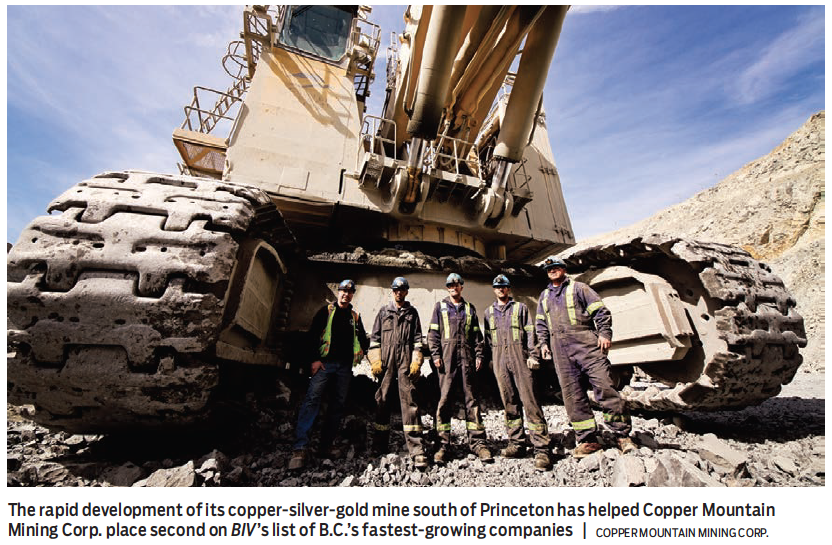 “When we optimize, we optimize our mining plan to obviously maximize our profits, and, in doing so, it does tend to shift us from one area to the other depending on what the metal prices of the various metals are,” O’Rourke explained.

As Copper Mountain Mining continues to mine on average 167,000 tonnes per day, the anticipated increase in gold production will come from shifting operations to the second of three open pits located on the site. Over time, the company’s plan is to develop all three until they merge to form a larger, deeper “super-pit.” Spread over four square kilometres, the pit will allow greater access to the site’s identified five billion pounds of copper reserves the company plans to mine over 17 years.

Though prospects look bright for the company ranked second on BIV’s list of B.C.’s fastest-growing companies for 2015, there is no denying the pervasive effect market volatility has had on all who work in mining. But with four decades of experience in the field, O’Rourke has learned that a strong management team and a good balance sheet can stave off layoffs and closures.

“We’re at a stage of consistent production from a large resource and we have right now in our mine plan 17 years and we believe it will be extended far beyond that.” •