Though hit hard in recent months by oilpatch downturn, WesternOne’s expansion has been marked by a careful hunt for acquisitions with a vigorous business culture

By Evan Duggan | August 25, 2015
WesternOne’s elimination of its dividend “was not a popular move,” but it was “the right thing to do,” says Andrew Greig, the company’s manager of investor relations | Photo: Chung Chow

Though hit hard in recent months by oilpatch downturn, WesternOne’s expansion has been marked by a careful hunt for acquisitions with a vigorous business culture

When Peter Blake changed his mind about retiring to become WesternOne Inc.’s CEO in September 2014, the move came around the same time that oil prices started to fall, taking a big bite out of one of B.C.’s fastest-growing businesses.

Founded as an income trust in 2006 and then incorporated in January 2012, WesternOne is a publicly traded company headquartered in Vancouver.

The company has $309.9 million of assets and employs roughly 800 people in Western Canada and the U.S. It has been expanding its stable of construction and infrastructure services companies by acquiring small and medium-sized competitors.

WesternOne’s businesses operate under two banners: Western-One Infrastructure Services, which, through 13 locations in B.C. and Alberta, provides heating, fuel and aerial rental equipment; and Britco, one of the largest designers, makers and leasers of commercial modular buildings in North America.

A large portion of their business takes place in the Alberta oilsands, as well as in the mining, shipyard and film industries.

“I think the hardest part was watching not only our company but many companies in the industry go into this dramatic down cycle and try to make sure that everyone understood it wasn’t anything they were doing or not doing,” Blake told BIV. “It wasn’t their fault. It was just circumstances that we were in.”

Prior to joining WesternOne, Blake spent more than two decades at Ritchie Bros. Auctioneers, serving as CFO from 1997 and then CEO from 2004 to 2014. He said the people and culture at WesternOne reminded him of those at his former job. 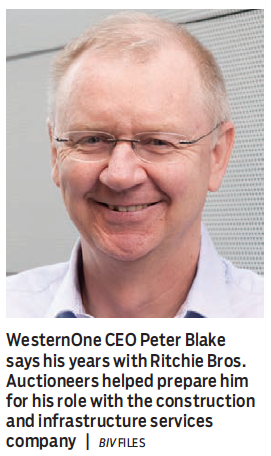 “When I looked at the nature of [WesternOne’s] operations, and the industries they were in – where they were in their life cycle – I thought I could probably use what I learned at Ritchie Bros. over the years to help them move their growth curve along the way.”

WesternOne’s revenue trajectory was strong until recently, with revenue climbing from $48.2 million in 2010 to $374 million in 2014. But its recent figures have been lagging, pulled down by Alberta’s struggles.

The downturn has prompted WesternOne’s leadership to extend its debt package and eliminate its dividend.

“Blake has been through a few cycles and so he’s very patient and he’s financially literate,” said Andrew Greig, the company’s manager of investor relations. “He stays the course and acts prudently and cautiously.”

Greig said cutting the dividend “was not a popular move,” but one that was “the right thing to do.”

The company’s modus operandi has been to acquire small companies in its competing industry. Each move has allowed it to expand its product line, fleet capacity and service outlets. Its acquisitions have ranged from $2 million companies to businesses worth $93 million, Greig said.

Taking over small or family-run businesses is often an emotional process and needs to be done with respect, Blake said.

“You’re typically dealing with a business that has been grown and nurtured by a small group of people,” he said. “It’s more than just numbers on a page for lots of folks.”

He added, “You have to show a respect for what they’ve built. I think everyone wants to be treated that way, and there’s no big secret to it. It’s just being transparent and open.”

In looking for acquisitions, WesternOne seeks small companies that show a spirit of entrepreneurship.

“That’s really the secret sauce of any business,” Blake said. “A lot of acquisitions typically fail. And if you look at small or big, it doesn’t matter. They typically fail because the cultures of the organizations don’t connect.”

Blake aims to have operations ready to ramp up quickly when the market rebounds.

“The market will turn,” he said. “I think we have to be prepared to make sure we’re well positioned with the right people in the right seats to be able to take advantage of when the market does turn.” •