Posch is GM of the Trump International Hotel and Tower Vancouver, which is set to open next June

Philipp Posch and wife Calle have lived in Vancouver for just two months, but they’re quickly putting down roots and already have a Canadian child.

Posch started his job as general manager of the Trump International Hotel and Tower Vancouver on July 1, after moving from Chicago with his wife and two-and-a-half-year-old daughter, Caia.

He and Calle were at the Southlands Riding Club on August 16 for the Pacific Polo Cup fundraiser, which was partly sponsored by the Trump hotel’s developer, Holborn Group.

“Two hours later, my wife was in delivery with my new son, Easton,” said Posch, 38.

This is Austrian-born Posch’s first time as a hotel general manager, although he has been manager of the Trump International Hotel and Tower Chicago for the past five years.

He has worked at luxury hotels since 1998, when he took a job at the Mandarin Oriental, Singapore. There, he did odd jobs such as reception, housekeeping and meal preparation.

He earned a bachelor’s degree from the Ecole hôtelière de Lausanne in Switzerland in 2001 and worked at hotels such as the Mandarin Oriental, Bangkok, and the St. Regis New York before taking a job as food and beverage director at the Trump International Hotel and Tower Chicago six months before that hotel opened in 2008.

Posch was part of the team that worked on the pre-opening of the Trump Organization’s Chicago hotel; he then watched as the company created what it now calls the Trump Hotel Collection and opened hotels in places such as Las Vegas, Hawaii and Toronto.

“When they opened a hotel in Soho, they needed somebody to work on the budgets,” Posch said of the Trump Hotel Collection, which now operates nine hotels.

“They needed someone to work on other pre-opening processes so a lot of the hand-holding came from Chicago.”

Holborn pays a management fee to Trump Hotel Collection for the right to use the Trump name and has equipped the hotel to that high-end brand’s standards. Holborn, however, is the company that reaps the hotel’s operating profits or suffers its losses.

“Philipp is a tough negotiator, understands the value of money and will guard the expenses of the hotel,” Tiah told Business in Vancouver. “He’s a leader who is not afraid to do the work himself. He is very knowledgeable of the hotel and food and beverage business and has an understanding of international cultures and clientele.”

Tiah invited Posch to Vancouver in February for a two-day getting-to-know-you session. After chatting in a boardroom, Tiah and Posch drove around the city in a Holborn company SUV and visited all of Vancouver’s high-end hotels to inspect rooms. They also visited restaurants.

“We’d walk in, experience the atmosphere, listen to the music and look at the menu to get to know the city and see what our competition is,” Posch said.

“The interview process has to go both ways. Yes, he needs to like me, but at the same time it needs to click and I need to like him and the city too.”

Vancouver’s Trump hotel will not open until June 2016, and Posch has yet to hire a senior executive team of about six people. Directors and managers will be hired this fall and then hourly employees will be sought at job fairs in December or January.

Then comes training to drill into new hires the importance of the personalized service that Posch stressed is key to the Trump brand.

One of Trump hotel chain’s hallmarks, for example, is its attaché program. Hotel employees phone guests in advance to ask about personal needs. If someone is bringing a child who likes hockey, for example, hotel staff may set up an Xbox in the room complete with hockey video games.

“Someone who can afford a $500 or $600 hotel room isn’t necessarily looking for a discount or a deal,” he said. “They’re looking for personal service.”

Several hundred people will work at the 147-room hotel that will occupy the first 21 floors of the 69-storey, under-construction twisting tower on West Georgia Street.

It’s expected that most guests will enter the building from the lane between West Georgia and Melville Street. That’s where there will be a concierge desk and an entrance to the upscale Chinese restaurant Mott 32.

Those who enter the hotel from West Georgia Street will first walk through a champagne bar that has yet to be named and is expected to feature a wide range of bubblies, including many from B.C.

“It’s a great time to be in this company right now,” Posch said. “We’re growing. We have three or four hotels opening next year, and the commitment from the family is to be at 30 hotels by 2020.”

Trump Organization principal Donald Trump’s current bid to be the U.S. Republican Party’s presidential candidate in 2016 is a wild card in the mix when it comes to attracting guests.

The hotel is slated to open a month before the Republican convention, when the Trump name could be dominating headlines. Posch, however, does not believe that scenario will have too much of an effect on the hotel’s ability to attract guests.

“There’s a certain percentage of people who love him and a certain percentage of people who hate him,” Posch said of Trump. “He’s been a celebrity for many, many years and people know him and what he believes. It’s a lot more in your face right now, but Trump is a great brand. People who love him or hate him probably loved him or hated him five years ago.” • 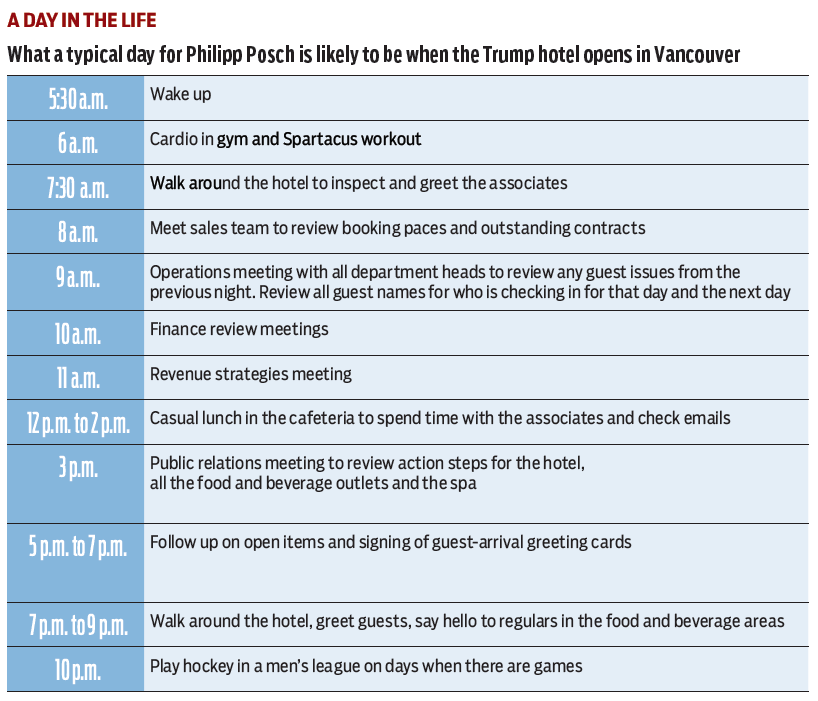