The world's tallest wood building is ascending at the University of British Columbia (UBC), and architects say it could provide the template for how wood highrises could enter the B.C. mainstream.

The $51.5 million UBC building is no architectural showpiece, concedes Russell Acton, a principal with Vancouver’s Acton Ostry Architects, which designed the plain-looking, 18-storey UBC student residence with wood adviser and architect Hermann Kaufmann of Austria. Instead, Acton said, it is meant to provide standing evidence that “mass timber” can be as affordable as concrete construction when it comes to building skyscrapers.

Mass timber refers to the use of heavy cross-laminated timber beams, provided to the UBC project by B.C.-based Structurlam, one of only two Canadian manufacturers. The strong beams are made of wood pieces glued together and can be of virtually any length.

Mass timber has “pushed wood construction to a place it has never been before,” said Michael Green of Vancouver’s Michael Green Architecture, who designed the nine-storey Prince George Wood Innovation and Design Centre, currently the tallest wood building in Canada, and recently proposed a 35-storey wooden tower for a design competition in Paris.

Acton said there’s a good reason why none of the new Vancouver office towers are made of wood.

“It is not yet allowed in the building code,” he said.

While the B.C. building code allows the construction of wood buildings as high as six storeys, no building codes in Canada currently cover wood highrises.

Acton said a site-specific regulation has to be established for each tall wood building.

This was the case at UBC, where it was demonstrated to code officials that the wood building would meet the same safety and fire standards as a concrete or steel tower. It is also designed to meet LEED (Leadership in Energy and Environmental Design) Gold certification.

Acton said the mass timber components are prefabricated in a factory and then craned into place. 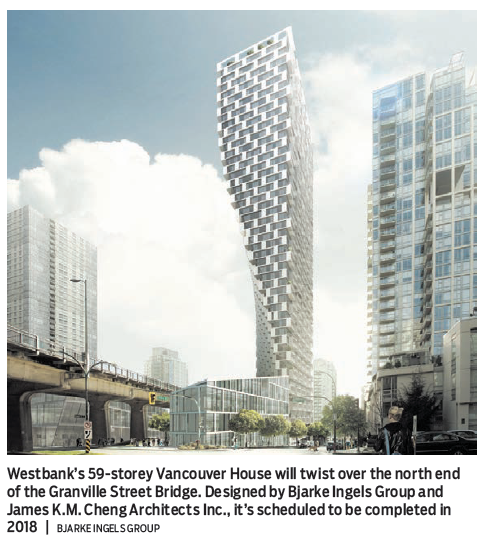 “The structure goes up very quickly, and that is a big advantage [over concrete construction]. You can save a few months of time in construction.”

Acton said there are some premiums being paid for tall wood buildings because there is a lack of competition from suppliers, and it takes time to train crews to work with mass timber. Prices would drop quickly if the concept became more widely used, he said.

Acton added that the bottom-line message with the 18-storey UBC building is that wood can compete head to head with concrete construction.

“This project is a genuine demonstration that a mass timber [highrise] building is economically viable. This is not a showpiece; it can work in the marketplace.”

Some “common sense” aspects precluded the use of wood in certain parts of the UBC project, Acton said. For example, the foundation and first-storey commercial space are concrete, and the interior stairways and elevator shafts are made from steel and concrete, as is the roof.

“When you get to 40 storeys or so, it’s difficult to do it all with wood,” Hamming said, “but it’s quite possible to do it with a hybrid.”

FPInnovations, a forest-sector research centre, conducted tests on the UBC building’s wood structural components. The building’s safety measures include enhanced fire protections and backup systems, a building-monitoring system and an upgraded building core, the first in B.C. to be specified to the new 2015 National Building Code of Canada for seismic design.