By Tyler Orton | December 21, 2015, 6:00am
The former Vancouver Police Department station on Main Street, which is now the site of a new technology and social innovation hub | Photo: Chung Chow

Andy Broderick had expected development permits from the City of Vancouver to arrive last month so renovations could begin at the former cop shop on the corner of Cordova Street.

Instead, Vancity’s vice-president of impact market development remains confident construction will start in the “next few weeks” for Vancouver’s Technology and Social Innovation Centre.

The City of Vancouver selected the 100,000-square-foot site in October 2014 as a tech hub that would fill the space left empty after the police department moved out in 2010. Jail cells still lined the walls for tech entrepreneurs who’ve toured the site.

The goal is to bring in digital tech startups, clean-tech companies, tech accelerators, non-profits and micro-enterprises under one roof in one of Canada’s most poverty-stricken neighbourhoods.

The city had already spent $1.1 million on upgrading the building, while the Vancity Community Foundation earmarked another $1.5 million for the project in 2013.

The foundation is serving as the project’s landlord and the Vancouver Economic Commission (VEC) will monitor its economic impact and try to bring in investors and mentors.

No tenants have been secured yet, but Broderick expects the Vancity Community Foundation to announce the first one in January.

Meanwhile, the foundation and the VEC will form a joint advisory committee with community groups in the new year to determine which tenants are best suited for the hub and the neighbourhood.

And if construction begins in the coming weeks, Broderick anticipates the hub will celebrate a soft opening by the end of November 2016.

“We’re talking to a number of global platforms for acceleration,” he said.

Accelerators generally make money by taking equity in a start­up in exchange for workspace, networking opportunities to raise capital and mentorship from tech leaders. 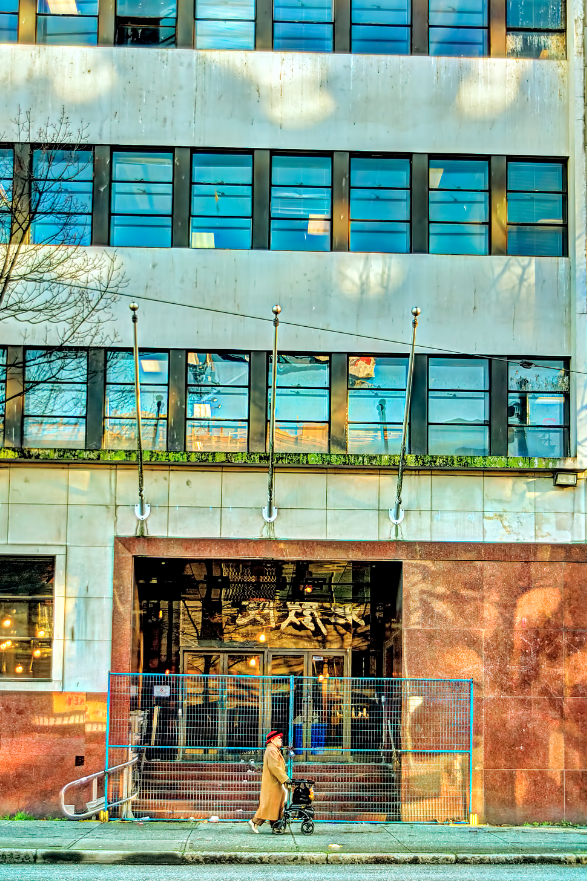 While the VEC is talking to global accelerators about moving into the hub, it also held discussions three years ago with the Vancouver-based Launch Academy incubator.

“We were just not in a position for Launch Academy to take an entire floor and mould and shape it. My focus has been on building Launch Academy and not building a new tech hub,” said CEO Ray Walia, whose incubator provides services similar to those of an accelerator.

During consultations with the VEC he outlined the challenges of bringing in companies and organizations from disparate backgrounds to work under one roof.

Walia said differences in the way digital tech and biotech companies are built have to be addressed. He added that “having good strong companies around, having a good mould of individuals around you, is critical to attracting more companies.”

That could be a big hurdle for the Downtown Eastside hub, Walia said, because most tech companies in Vancouver are in areas such as Gastown, Yaletown and Mount Pleasant.

Walia added that starting a new cluster in the Downtown Eastside could be difficult because there’s no SkyTrain station within walking distance and employees might have security concerns walking through the neighbourhood.

Walia suggested frequent shuttle buses to a SkyTrain station would also be necessary to address concerns potential employees might have about safety.

Jonathan Bixby, a general partner at Stanley Park Ventures, said he’s had high-level discussions with the VEC but nothing formal has come of it.

All his interactions with the VEC have been positive; however, because his operations are based out of Launch Academy’s offices, Bixby doesn’t see Stanley Park Ventures moving to the hub without Walia’s team.

“They need some anchor tenants, and they know this, too. You’re not going to fill this space up going and getting 80 start­ups,” said Bixby, whose startup foundry offers services similar to those of an accelerator or incubator. “With those anchor tenants come startups, and unless they do that, they’re not going to be successful.”

But Bixby said he believes in the hub’s long-term vision and that there’s enough demand in Vancouver’s tech sector to fill that space.

BC Stats’ 2014 profile of the province’s tech sector determined that 728 new startups were launched in 2014.

And since opening nearly a year ago, the BC Technology Industry Association (BCTIA) has filled most of the 26,000 square feet of space at its Innovation Hub near the VCC-Clark SkyTrain station. BCTIA is the hub’s anchor tenant.

“You’d have to look at it like a retail centre. You find your anchor, you find your grocery store and maybe a Starbucks, and then you can fill it up with some other retail tenants so when people come they can do all their shopping in one place,” said Matt Carlson, vice-president at Colliers International’s Vancouver office.

“Part of the reason that Mount Pleasant took off was because Hootsuite moved in, and they were effectively the anchor for the neighbourhood.”

Carlson, who chairs his company’s national technology practice in Canada, said the Downtown Eastside neighbourhood could serve as a viable option for startups operating on thin margins looking to cut costs at a location that’s relatively cheap to lease.

“312 Main Street will remain affordable for a long period of time,” VEC’s Elbe said. “But for us this isn’t a real estate play. This is: how do we bring the entrepreneurship community together with the services they need to help them grow?”