By Glen Korstrom | December 8, 2015, 6:00am
Shop.ca founder and majority owner, Drew Green, has taken the helm at Indochino | Indochino

Menswear seller Indochino has appointed former Shop.ca CEO Drew Green as CEO and intends to rapidly expand its number of storefronts in the next few years.

The news comes on the heels of what the company says is its best-ever year for sales and a 40% year-over-year revenue rise. It also comes after significant rotation on the company's corporate board.

Indochino, which started as an online suit-seller, currently operates seven stores. Most of its revenue, however, still comes from e-commerce.

Previous CEO and co-founder, Kyle Vucko, will stay with Indochino as an advisor but will not be full time and, instead, will live in Victoria. He moved to B.C.’s capital at the beginning of December so he could spend time with Amelia Warren, whom he married in September.

“We’ve been commuting and living apart for the entire six years of our relationship and I felt this is the time to live together,” Vucko told Business in Vancouver December 4.

Vucko said that he gave Indochino notice in early 2015 that he intended to leave his CEO post.

The company embarked on a search for a new CEO and was close to making that hire in the summer.

“It didn’t work out, luckily so, frankly, given that we found Drew and where he wants to take the company,” Vucko said.

Green founded Shop.ca and he remains the majority shareholder of that venture. Vucko said Shop.ca is much larger than Indochino and would likely have a market capitalization in the hundreds of millions of dollars. That experience was something that Indochino principals were looking for in a top executive.

He also worked for Shop.com, which was acquired by Market America. 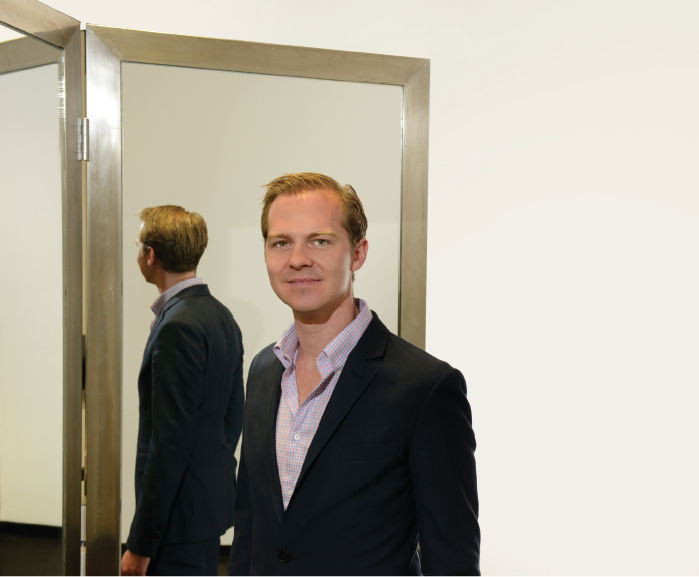 Speculation has been that Indochino also intends for its bricks-and-mortar stores to expand selection to include ready-to-wear apparel and accessories – something that retail analyst and Retail Insider Media owner Craig Patterson suggested could be a dangerous move.

“How many other ready-to-wear brands are there out there?” Patterson asked. “Thousands. They will be a brand in a sea of brands. So, unless they can maintain their core business, which is their suits with some stores and online ordering, they could experience a lot of competition. Their venture isn’t guaranteed to succeed.”

Patterson noted that a trend toward customization is rampant in the retail sector and consumers increasingly expect to have customized service.

That has spurred upstart brands, such as Quebec’s Surmesur, to attempt to eat Indochino’s lunch, Patterson noted.

Surmesur, which also specializes in custom-made suits, opened its fifth store in November. Its website notes that it plans to launch a “new online creative platform” this fall.

Its suits start at $375 and are priced in Canadian dollars.

Indochino prices, in contrast, have crept up, start at US$449 and are priced in US dollars even for those who are shopping in Canada, according to Patterson.

Vucko launched the company in 2006, when he was a University of Victoria commerce student. He and fellow classmate Heikal Gani hatched the idea to have Chinese tailors sew made-to-order suits for people to buy online.

Within a couple of years he had landed $300,000 from investors such as former Yahoo! Inc. (Nasdaq:YHOO) president Jeff Mallett.

Subsequent financing rounds brought in at least $18 million and a raft of experienced, retail-savvy investors, such as Tom Stemberg, whose Highland Capital Partners was an early investor in Lululemon Athletica Inc.

Mallett had been chair of the Indochino board but he resigned as chair and as a director in August 2014. His intent was to focus on several other projects, including his part-ownership of the Vancouver Whitecaps, Mallett told BIV in a December 7 email.

Since Mallett’s departure, the Indochino board has been a bit of a revolving door.

Stemberg, Vucko and Gani have left the board. So has Christoph Braun, who heads Munich's Acton Capital Partners and was an early investor in AbeBooks.

Indochino told BIV on December 7 that the board has shrunk to four. It now includes Green, Scott Jacobson, who is managing director at Seattle's Madrona Venture Group, Michael Cam-Phung who is a principal at Highland Consumer Partners (HCP) and Peter Cornetta, who is HCP's managing general partner.

Green is expected to buy an ownership stake in the company.