Here’s his pitch: Prince Rupert (population 13,750) is in the best position on the continent to ship goods back and forth to Asia, and, eventually, to become the hub city for cargo traffic travelling along the Northeast Passage above Russia between North America and Europe.

“We’re about nine days closer to Europe from here than the Panama Canal, so we’re going to see a shift in the global trading network moving up north,” Brain said.

It’s a lofty goal but not one without merit, and some numbers to back it up.

He calls the plan “Hays 2.0,” hearkening back to city founder Charles Hays, whose vision a century ago was to transform Prince Rupert into North America’s Pacific gateway.

Hays’ vision for Canada’s north Pacific coast, however, perished in the North Atlantic in 1912 with the sinking of the Titanic, on which he was a passenger.

In August, the Port of Prince Rupert’s Fairview terminal had a record month, moving containers amounting to 75,460 20-foot equivalent units (TEUs) – the highest single-month volume recorded since the terminal opened in 2007.

The Fairview container terminal is on track this year to surpass its annual record tonnage.

Some 5.3 million tonnes of cargo were moved through Fairview in the first eight months of 2015 compared with 4.1 million for the same period in 2014.

Earlier this year, Dubai-owned port giant DP World bought the Fairview terminal for $580 million, saying that the facility “offers the fastest access for vessels travelling between Asia and North America.”

The purchase coincided with an announcement that the terminal will be expanded to handle 1.35 million TEUs annually from 850,000 today.

The Port of Prince Rupert also recently netted a berthing from project cargo and heavy-lift shipping operator AAL, highlighting how recent investments in a cargo-handling facility and road-rail utility corridor have diversified the type of carriers the port can handle.

And, in October, an alliance between Mediterranean Shipping Co. and Maersk Line resulted in the arrival of the container ship Columbine Maersk at the Port of Prince Rupert, signalling a new weekly service into the northwest coast city.

Although port-related investments and growth were happening long before Brain was elected in 2014, the city’s leadership has quickly picked up on the idea that Prince Rupert’s future is not about serving a single industry but about becoming a crucial artery for global transportation.

“We want to get ahead of the game and start to message to people if LNG doesn’t happen immediately, we don’t want global investors to think this isn’t a place to invest. … It is,” Brain said.

But where does the rubber hit the road now? 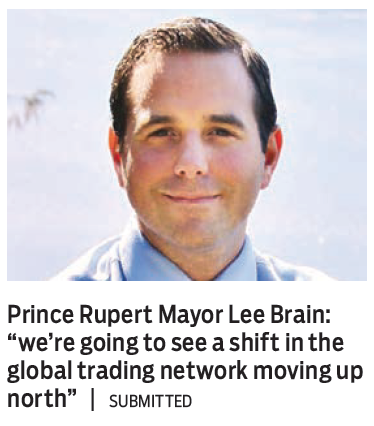 “Coming together with First Nations in the region to form a partnership to enable this vision to emerge, that’s one of the key pieces, especially with investors coming in,” he said. “Also, working with the federal government on current trade regulations would help enable the American trade to come here, and those are things we’re already starting to work on.”

One of the many challenges the city faces is the subtlety of trade restrictions – the “who” and “what,” as defined by trade agreements such as the recently unveiled Trans-Pacific Partnership, that can move through Prince Rupert’s port.

As well, exploiting the Northeast or Northwest passages to increase trade with Europe is likely still some years away.

A study published in September by York University shows that Arctic sea ice remains too thick for a regular shipping route through the Northwest Passage (the study didn’t mention the Northeast Passage).

Even though this past summer’s Arctic-wide ice coverage is the lowest on record, the study noted that melting and breakup could create additional shipping hazards that would mean the passage may not become easily navigable for several more decades.

Still, Brain’s message to current and would-be investors in the city is simple: “Rupert is open for business.” •