(The story has been updated to include a response from Joo Kim Tiah, CEO of the tower's developer, the Holborn Group)

Former Vancouver chief planner Brent Toderian is asking Vancouverites to call on the Trump International Hotel and Tower in Vancouver to remove any reference to the Trump name.

Vancouver Coun. Kerry Jang said he agrees and sent a message to Holborn Group CEO Joo Kim Tiah this morning asking him to think about the message the Trump name sends.

"To have his name here, it's just reprehensible," Jang said.

"When I heard the news this morning, the first thing I thought was we have this damn Trump tower going in. It's like a beacon of racism."

This comes after GOP candidate Donald Trump issued an official statement saying he thinks there should be a total ban on Muslims entering the United States.

“As Trump calls to ban Muslims from entering the U.S., I seriously suggest that Vancouverites call on @TrumpVancouver to remove his name,” Toderian tweeted December 7. 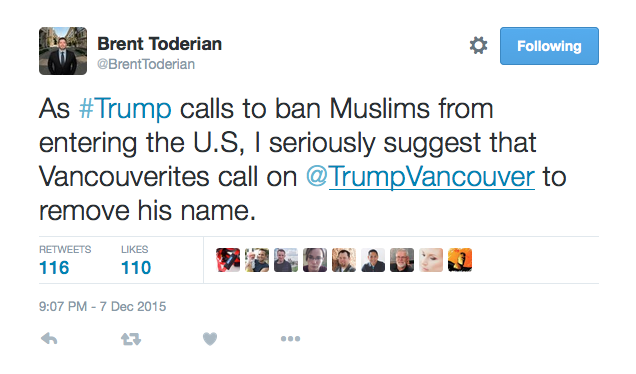 Toderian told Business in Vancouver that Vancouverites should direct this call to the developers, Holborn Holdings and Malaysia’s TA Global.

Joo Kim Tiah, CEO of Holborn, said the company "is not in any way involved in U.S. politics."

"As such, we would not comment further on Mr. Trump's personal agenda, nor any political issues, local or foreign," Tiah said.

"Our efforts remain focused on the construction of what will soon be the finest luxury property in Vancouver and beyond."

Tiah had told Business in Vancouver in 2013 that he approached the Trump organization to be partners in the project mostly because he bonded with Donald Trump Jr. and knew Donald Trump's children would be the point people in the Vancouver project.

"Me and Don Jr. have a lot of similarities," Tiah said in the BIV profile . "We're both second-generation people. We both have strong, dominant fathers who are very successful. How Don treats Don Jr. is very much how my dad treats me. It's firm. He's very tough on his kid. I can associate."

The Trump hotel is expected to open in June 2016.

“Government doesn’t have any control over what developers call their buildings, and I suspect even the developer probably has limited flexibility at this stage,” Toderian said. “They are getting close to launching their building, they’ve picked a partner and taken the partner’s name, and it’s probably contractually locked up.

The problem with having Trump’s name attached to the building is that Trump’s brand is contrary to the values held by Canadians in general and Vancouverites in particular, Toderian said. All he is hoping for is a discourse about how appropriate it is for a building to be associated with the Trump brand.

Jang agreed, pointing out that Trump defended his proposal to ban all Muslims from the U.S. by comparing it to former president Franklin Roosevelt's decision to intern Japanese-Americans during Second World War.

Toderian said he doesn’t want to give the impression he thinks the developer is the "bad guy" in this situation, but that they must be regretting their business decision of attaching the project to the controversial figure.

“I honestly do feel sorry for [the developers],” he said. “They must just be kicking themselves. Everytime he says something, I’m sure they wince.”

While Holborn's decision to licence the Trump name has already been made, Jang said that was not an excuse.

"When it comes to fighting racism, it doesn't matter how much is spent," he said.

There have been requests on Twitter for Toderian to start a petition, but this isn’t going to happen, he said.

“I’m not a petition kind of guy. I suspect some petitions might get started, but as I say, there’s no legal avenue here.”

It wasn’t just Trump’s latest remarks that prompted Toderian to question the appropriateness of the tower’s name. As early as June, he tweeted that he was embarrassed the Trump name has been “scotch-taped” to a Vancouver building. 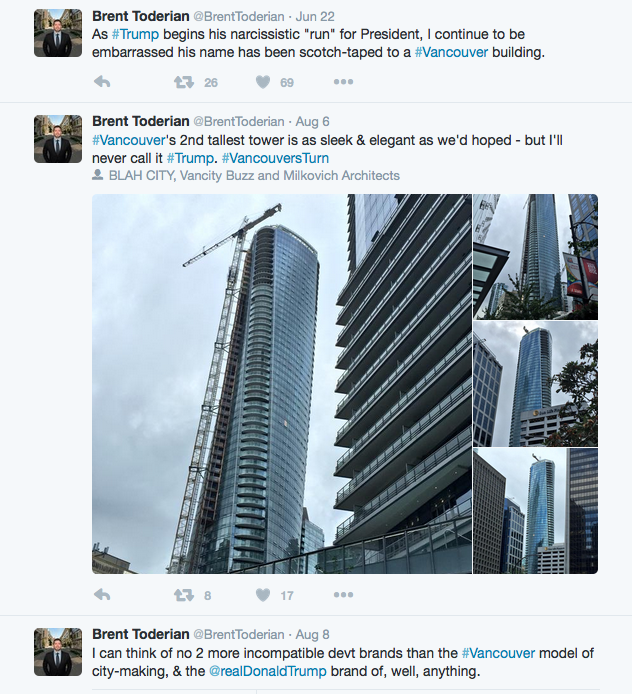 “The amount of media attention he gets is kind of unique, so when he says something so outrageous as banning Muslims from the United States, it’s not our politics,” Toderian said. “It certainly would affect us as Canadians, but it’s certainly not our election.”

“It’s an opportunity for a conversation about how our value system differs from his.”