For Andrew Petter, education takes on an importance that goes deeper than just a respect for learning as a means of bettering oneself and one’s prospects. One generation ago in his family, it literally made the difference between life and death.

“My mom grew up in Austria,” said Petter, the president and vice-chancellor of Simon Fraser University. “She was a Jew, and the only reason she is alive is because she gained an education that enabled her to travel and perform.”

Petter’s mother, Lisl Petter, attended the Vienna Academy of Music and Performing Arts in the 1930s. After graduation she was accepted into the Tanzgruppe Bodenwieser, a creative dance company. While touring in London, Lisl met her future husband, Gordon Petter, at an after-party, and the two moved back to Vienna, where they married and lived in a small apartment until the Anschluss—the annexation of Austria by the Nazis in 1938.

“Because she was married she was able to get out of Austria before the force of Hitler was fully felt,” Petter said. “So for her, education was not only meaningful in terms of building one’s own potential, but actually her survival.”

Lisl and Gordon left war-ravaged Europe shortly after the end of the Second World War. Petter was born in 1953 in Victoria, and his family’s history is steeped in amazing stories much like his mother’s. His grandfather Sir Ernest Petter  and great-uncle Percy Petter are widely known in the world of aircraft and engines, and his father– an Oxford graduate – owned a clock shop in Victoria and also taught at Notre Dame University in Nelson, B.C.

Petter graduated from high school in Nelson as class valedictorian, and began taking classes at the university  where his father taught.

“I started out in very general studies,” said Petter. “Philosophy was probably my major interest. And then I took a year out to work at a radio station and got interested in media and actually ran an open line show in Nelson.”

Hosting the CKKC Radio show afforded Petter the chance to interview some weighty political figures, including then-premier Dave Barrett and former premier W.A.C. Bennett. Petter’s political appetite had been whetted, and at the age of 19 he became an executive assistant for Nelson-Creston MLA Lorne Nicolson.

Petter admitted he had no great love for law, but rather figured it would allow him a wide career path.

“It was more about keeping my options open,” he said. “What’s different with law from, say, going into medical school, is that law can lead you into a career as a practitioner of law but it’s also a great way of equipping yourself in participating in any number of different suits. And so I saw law school as a way of advancing my education and gaining greater knowledge.”

Petter entered UVic’s law school in 1978, graduating in 1981 and receiving the Law Society of BC gold medal for finishing at the top of his class.

He then went on to earn a master’s degree in public law with first-class honours from Cambridge University. He briefly practised law in Saskatchewan, but academia soon came calling, and he became an assistant professor at York University’s Osgoode Hall Law School in 1984. He then joined UVic’s faculty of law in 1986.

Petter said law and politics have always run in a similar vein, and remain two of his passions in life.

“The law is what informs the nature of the country – the ways that we protect rights and freedoms,” he said. “And so I saw law very much as a door-opener, and as I got into law school I got interested in aspects of law that related to the shaping of society and making a difference in the way our political institutions work and the way in which people can engage in a democracy.”

But after a few years of teaching, he found politics calling again – more specifically then-B.C. NDP leader Mike Harcourt, who wanted him to run in Saanich South in the 1991 provincial election. Petter would spend the next decade as an elected official, heading several ministries including Aboriginal Affairs, Forests, Health, Attorney General and Advanced Education.

“I never saw politics as a vocation; I saw it as a form of community contribution – as a way that I could hopefully make a difference, as a way of service,” he said. “But I always saw myself as a law professor who was serving as an MLA.”

After two terms, Petter decided to leave politics – “I felt it was time to get back to what I did think of as my career, as an educator.”

He returned to UVic to resume teaching and before long was filling the role of acting dean of the university’s law faculty, later becoming dean and serving in that position from 2002 to 2008.

When Simon Fraser University asked Petter to apply for the position of vice-chancellor and president in 2010, he was initially hesitant.

“I’d never thought of myself as a traditional university administrator,” he said. “But I had always admired SFU. When I was in government it was the university that was doing things differently – the move to the Vancouver campus and the campus at Surrey – and it was definitely a university that showed a kind of different energy and connection to the community.”

SFU chancellor Anne Giardini said Petter not only brings a wealth of knowledge to his position, but is also “boundlessly energetic.”

“I have been described as something of an Energizer Bunny myself, but I have a hard time keeping up with him,” Giardini said.“When we are at any of our three campuses, Burnaby, Downtown Vancouver and Surrey, he introduces me to everyone we meet by name. He knows and celebrates their achievements. He’s also a lot of fun and doesn’t suffer from the cardinal sin of taking himself too seriously.”

Petter said that since taking on the position, he has enjoyed being a part of SFU’s unique vision, which stresses making the institution a vital part of the day-to-day life of the city. Petter said the whole idea is to bridge the divide between academia and the outside world, and even more importantly, the business world.

“This valley of death … exists between universities and the marketplace, where so much of university research doesn’t get out into the marketplace, and if it does, it doesn’t succeed because it hasn’t been disciplined or informed or energized by market information or by the needs of the community,” he said. “So you invent something great but it turns out it isn’t needed, or isn’t affordable.” • 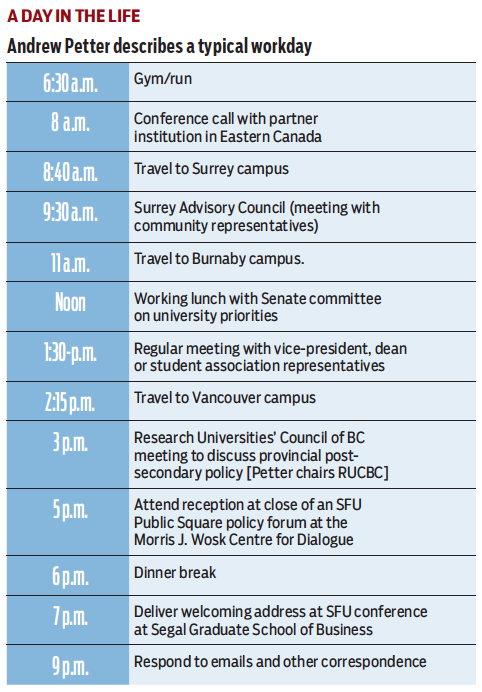