The two best employers in Canada are based here in the Lower Mainland, according to...

The two best employers in Canada are based here in the Lower Mainland, according to a Forbes list released February 24.

BC Hydro and Vancity come in first and second place, respectively, on the list of the top 250 best employers in the country. The other companies rounding out the top five are ABB, Ubisoft and Costco.

For a complete ranking of the top 250 employers, visit Forbes’ list here.

The list was compiled based on surveys of 8,000 permanent workers in large organizations (500 or more employees) across Canada. Those polled were asked if they would recommend their own employer or any other employers in their industry to potential workers. 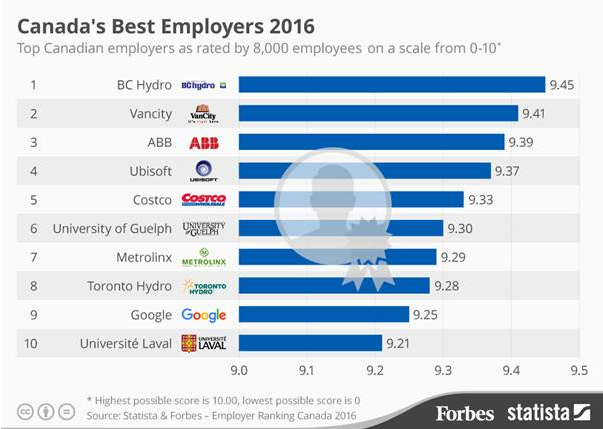 According to its website, BC Hydro offers its employees continued skills training, flexible work hours, contributions to defined benefit pension plans and phased-in retirement plans, which allow workers to decrease their work hours gradually. It also gives new parents 17 weeks of leave paid at 87% of their salaries.

Vancity pays employees based on a living-wage policy and offers a profit sharing program. It also has flexible work hours and maternity and paternity leave top-ups.

The 250 best companies to work for were spread across 25 different industries. The most favourable responses were from those employees working in construction, oil and gas operations and mining and chemicals.