Convention of convention planners could be windfall for Vancouver tourism

By Glen Korstrom | February 8, 2016, 9:00am
Vancouver Convention Centre vice-president of sales and marketing Claire Smith, who helped bring a 4,000-delegate convention-management convention to the city: “the big job … now is to make sure that we convert that opportunity into new business for Vancouver” | Chung Chow

Vancouver’s growing tourism sector is expected to get a lasting boost from a convention of convention planners.

The effect of that convention is expected to be magnified because all of those attendees are in the business of planning conventions and helping various groups decide where to host conventions.

“The big job at hand now is to make sure that we convert that opportunity into new business for Vancouver,” said Claire Smith, vice-president of sales and marketing at the Vancouver Convention Centre (VCC).

PCMA convention attendees enjoyed sunny weather, which allowed views of snow-topped mountains on January 9 and 10, when they were arriving.

Slight rain and cloud during the next two days kept them inside at the convention centre, attending sessions on topics such as how to run virtual meetings and otherwise use technology to improve conventions.

“We brought a lot of people to Vancouver who either hadn’t been before or hadn’t been for a long time,” PCMA CEO Deborah Sexton told Business in Vancouver. “Based on the reaction to date, people truly loved Vancouver.”

She praised the Vancouver Convention Centre design, which lets in plenty of daylight and views of the mountains.

Sexton said she heard plenty of positive feedback about Vancouver International Airport and how easy it was to travel to downtown on the Canada Line. 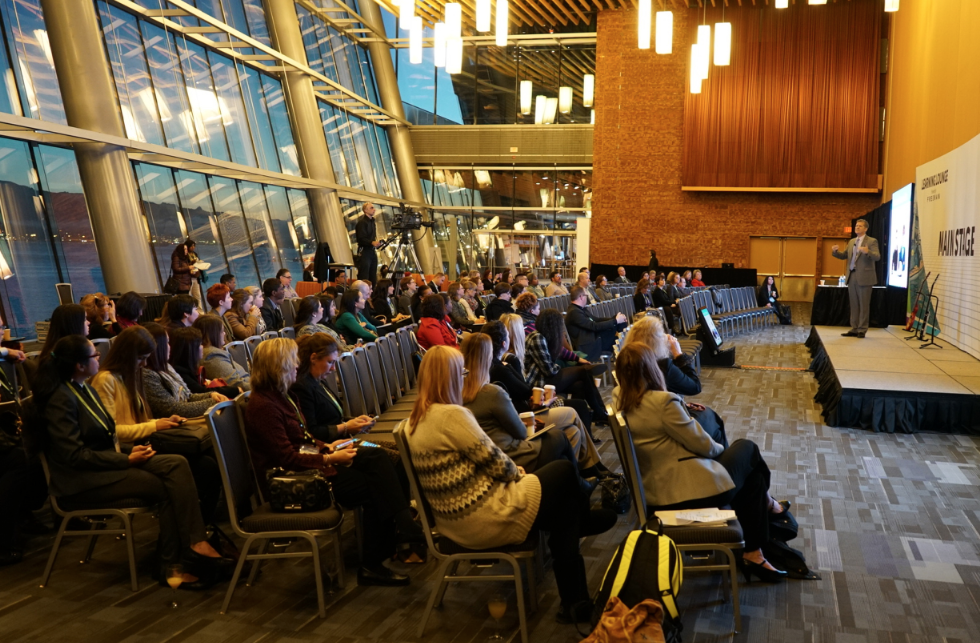 The convention was one of 549 events that the VCC expects to host in the year that ends March 31, and the centre is projecting that about 153,778 out-of-town delegates will attend those events.

“The total number of events doesn’t always equate to size [measured by total out-of-town delegates],” Smith said. “Sometimes you can have more events, but they are smaller ones.”

The number of visits in this fiscal year is expected to be up more than 1.2%, compared with the 2014-15 fiscal year, despite hosting seven fewer events.

The VCC forecasts that the number of out-of-town delegates will rise next year by another 2.8% to 158,076 people attending only 534 events, including a record 72 conventions.

Large events on the horizon include:

•the 8,000-delegate convention for the American Academy of Neurology in April;

•the 6,000-delegate general meeting for the Society of Interventional Radiology in April; and

“That MDRT is a great example of success with our re-booking strategy,” Smith said. “They met in Vancouver for the first time in 2010 and are meeting here again this year and have already confirmed returning in 2024.”

Tourism has been strong across the province.