By Glen Korstrom | February 21, 2016, 9:00am
Indochino CEO Drew Green has about 17 years’ experience in online marketing and e-commerce | Rob Kruyt

If you want to understand what inspires new Indochino CEO Drew Green, a good start would be to read the 1988 book The Alchemist.

Someone gave that transformative book to Green in 1995 when he was completing a kinesiology degree at York University. He still carries the book around in his handbag and he claims to have read it “1,000 times.”

When the 41-year-old took the helm of Indochino in December, one of his first moves was to give about 200 employees a copy of the Paulo Coelho novel that was originally written in Portuguese and has since been translated into 67 languages.

“One of the key themes is to embrace the journey and not set yourself up to just think about the treasure or the destination,” explained Green during an interview in the boardroom of the online menswear retailer’s 7,000-square-foot head office on Homer Street. “You will get there, but if you just focus on that destination you will miss all of this – the journey.”

Green knows a lot about journeys, though travels of the geographical kind began somewhat late in his life. He had never been on a plane until he began studies at Ontario’s York University.

There, he had to first start a business while completing his kinesiology degree.

A top athlete and varsity basketball player, Green used his sports background and kinesiology knowledge to launch a personal training venture to pay the bills. It expanded to employ a few other personal trainers, and he built a book with dozens of clients.

As much as he loved training clients, working out and building his enterprise, he knew that he did not want to do it for the rest of his life.

So he sold the venture for more than $100,000 and used the proceeds to see the world.

“It was an incredible experience,” he said. “I went to 22 countries inside of a year.” 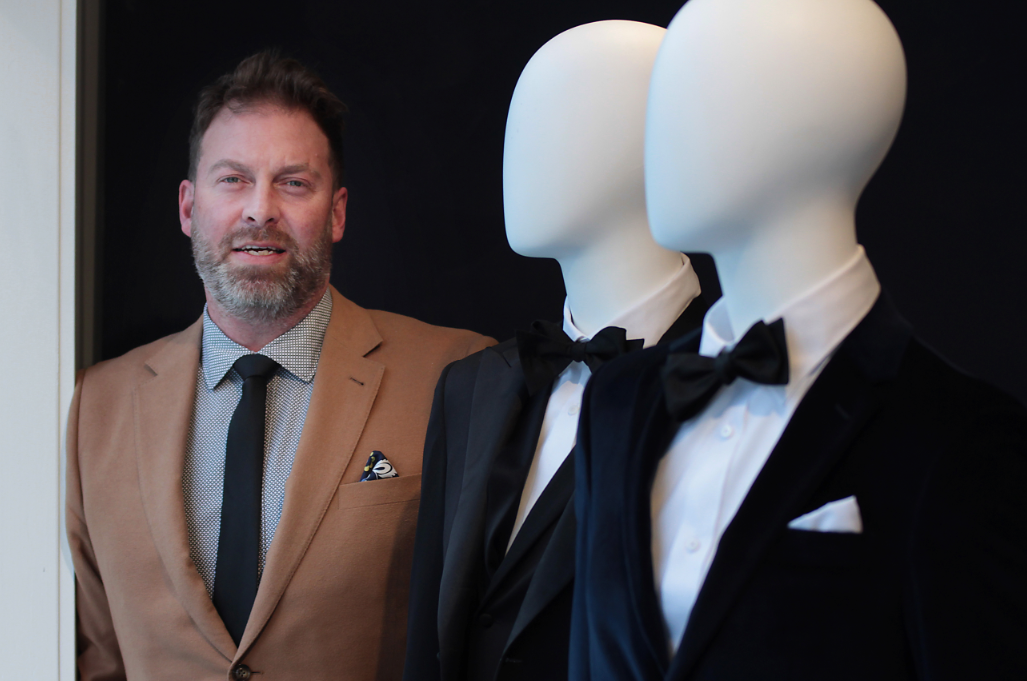 (Photo: Drew Green believes Japan is the country where Indochino has its most growth potential | Rob Kruyt)

While travelling, he met people with whom he forged lasting relationships. Someone from Taiwan, for example, invited him to visit the country, and, later on, he flew to that country and spent a week there.

His home base for much of the time was in Sydney, Australia, where he rented an apartment that overlooked Bondi Beach.

“I’m so fortunate to have done that travelling because I think about trying to do that now in this stage of life – to take a year, pack a bag, literally a bag, and get on a plane and be like, ‘Hey world, here I come’” – it wouldn’t be possible,” he said. “Now I have so many responsibilities, accountabilities.”

Green is moving into a newly purchased Shaughnessy home with his wife, Andrea, sons Liam and Aidan, who are 10 and eight, and the family dog, Riley.

Green aims to have his Indochino journey yield 150 bricks-and-mortar showrooms by 2020, and he describes the company, which started out as an online suit seller, as an “integrated apparel company.”

He is also revamping his company’s website to make it feel more local to people who access it regardless of where they are in the world.

Its website is in English only, and its prices are in U.S. dollars – something not immediately apparent when scrolling down the website’s splash page that shows dozens of different suit options and prices.

“Canadian is an obvious currency for us to have, and we’ve identified six other currencies to have on the site,” he said. “We’re also going to look at some language localization.”

About 70% of Indochino’s sales are to U.S. residents while another 25% come from Canada. Green believes Japan is the country with the biggest growth potential.

Not only are many of its residents well off enough to afford suits that sell for between US$500 and US$800, but wearing suits is part of that country’s business culture.

Expanded sales are also likely to come from increasing the range of fabrics to 300 from about 50 four years ago.

He is also considering having his stores sell other retailers’ products.

Green got into online marketing when he returned from his travels in 1998 and was hired by a friend, who was also a former personal-training client and a principal of the email marketing company FloNetwork.

Green rose quickly through the ranks to become a manager. He was one of about 200 employees at the Toronto company when New York City’s DoubleClick bought FloNetwork in February 2001, just as the dot-com boom was turning into a bust.

“DoubleClick moved two employees to New York,” said AppNexus president Michael Rubenstein. “One was Drew, and I was the other. We were two of the young guns there.”

Rubenstein remembers Green being inspiring and fun to have around.

“He’s a big-idea thinker who is not afraid to take bold action,” Rubenstein said.

After Google bought DoubleClick for US$3.1 billion in 2007, Green moved on to become senior vice-president of sales and business development at Shop.com, which Market America bought for an undisclosed amount in 2010.

Each step of the way, Green had small equity stakes in the companies he worked for.

Nostalgic for Canada and wanting his young sons to grow up as Canadians, Green moved back to Toronto and founded Shop.ca.

A little more than a year ago, as Green turned 40, he “retired” to spend more time with family. He taught his kids basketball and walked them to school.

His return to a high-profile business role late last year was not because he simply yearned for something to do. It was more than that.

Before he died of cancer last October at age 66, Indochino’s former board chair, Tom Stemberg – a man best known for founding Staples and someone whom Green, in his own words, was, “in a good way, infatuated with” because of Stemberg’s passion for the business – asked Green to join Indochino.

Green thought the timing was perfect. 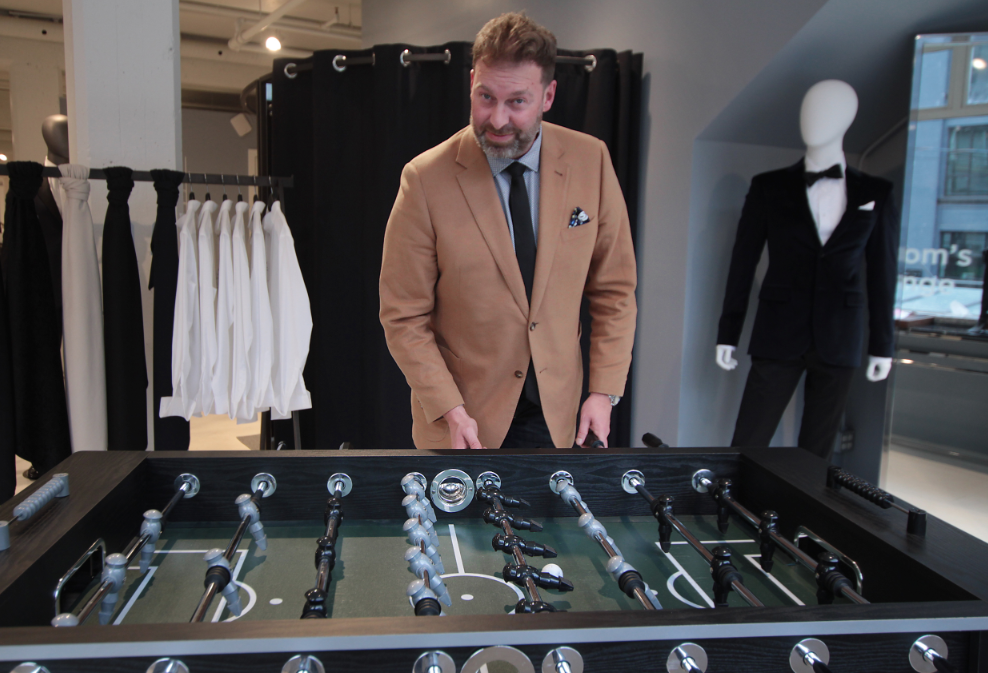 (Photo: Drew Green takes time out of a busy day to play some foosball | Rob Kruyt)

Indochino founder and director Kyle Vucko had announced earlier in the year that he wanted to leave the CEO post to spend more time with his new wife, Amelia, who lives in Victoria.

Indochino had been close to hiring someone else to take over the role.

“It didn’t work out – luckily so, frankly, given that we found Drew and where he wants to take the company,” Vucko said. •