First instalment in a series

High fees and over-regulation are threatening to choke the life out of the TSX Venture Exchange (TSX-V), according to those who finance companies listed on the junior exchange that is heavy with Vancouver-based companies.

Further hastening its demise are low oil and commodity prices, which disproportionately hurt the TSX-V because more than 70% of its listed companies are resource or mining companies.

Exchange executives doubt the situation is as dire as the financiers.

Nonetheless, the exchange recently released a white paper dubbed Revitalizing TSX Venture Exchange in an attempt to show that its executives understand the need for change.

They are now crossing the country hosting feedback sessions, including a January 28 standing-room-only gathering in Vancouver attended by about 400 people - many of them hecklers.

TSX-V management has also woken up to the need to take steps to reduce listed companies’ administrative and compliance costs while stressing that slashing regulation indiscriminately would scare investors who need to trust that the exchange has high standards.

“Stakeholders tell us, ‘Don’t do anything that compromises market integrity,’” said TSX-Venture Exchange president John McCoach. “If you do that, we’ll go from a state where it’s hard to raise capital to where it’s impossible to raise capital.”

Indeed, the TSX Venture Exchange has long prided itself on having higher disclosure standards than other exchanges for junior companies in cities around the world.

BCSC executives appear to be listening: they recently changed regulations to make it easier for companies to conduct rights offerings, which is a way to raise capital.

More, however, needs to be done, said Don Mosher, a partner at B&D Capital who has been in the investment industry for more than 25 years.

“They gouge their clients with fees. The exchange should never have been turned into a for-profit organization owned by large financial institutions.”

Mosher believes that the exchange’s owner, TMX Group (TSX:X), is a puppet of Canada’s large banks because those institutions own what McCoach admitted is a 23% stake in the company.

Banks are smothering the exchange, Mosher said, because bank representatives want to sell their own exchange-traded funds and other products instead of selling equity stakes in small companies. As such, they fail to provide institutional or analytical coverage for TSX-V-listed companies, and they prohibit brokers from selling shares in TSX-V companies to clients.

He railed at the banks for being in a “conflict of interest” by having brokerage arms, insurance agencies, ratings agencies and trust companies.

“If you’ve got a Canadian bank with a huge loan portfolio and their brokerage arm is looking at financing one of the many oil and gas companies that are all under water at this point, what one will they finance?” he asked. “They’ll finance the one their bank is owed money to – not necessarily the best one.” 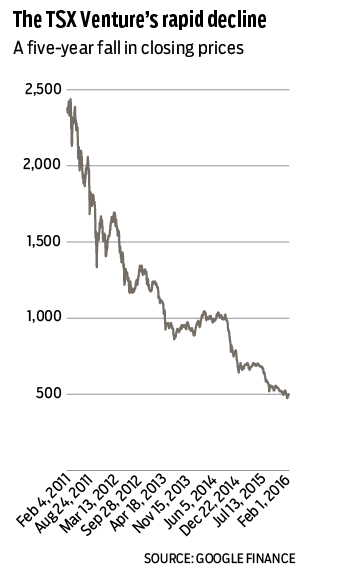 Both Mosher and Nyquvest say TMX is also driven to turn a profit for its shareholders and is suffocating the small companies that have already likely spent about $200,000 to go public, including listing, legal, accounting and other fees.

At the January 28 meeting, McCoach fielded multiple suggestions for how TMX could reduce fees, but he stressed that TMX will not let revenue slide.

“Let’s be honest,” McCoach said. “If we’re going to reduce our revenue by half [through fee cuts], we have to look at other ways to get the same revenue.”

TMX is drafting two policy changes that McCoach expects to be filing this month with securities commissions for final approval.

First, TMX wants to change the standard expectation that all companies that go public need a sponsor to vouch for credibility.

“We’re proposing to turn that concept on its head,” McCoach said.

The new reality would be that companies that go public do not need a sponsor unless there is no independent due diligence to verify disclosure documents.

“We know, looking at the data, that this will benefit the majority of companies going public, whether it is by an initial public offering, a reverse takeover or otherwise,” he said.

“There [are] often other proxies for due diligence. If a private company is backed by a venture capital firm, we know what the due diligence is that they’ve done. We know that we don’t have to go in and duplicate it.”

A second TMX policy change would save inactive companies money.

McCoach said many of these companies change their line of business through a reverse takeover or other means before returning to being an active company.

“If a company is inactive and in good standing with securities law and if the proposed transaction is of arm’s length in nature, we are not going to be imposing a shareholder meeting and a vote on that transaction.”

Other ideas for how TMX could reduce fees and listed-company expenses are to have automated online filings and to adhere to a commitment to process transactions within a specified number of days. McCoach also wants to allow active and proven directors of TSX-V-listed companies to have what amounts to a “quasi-Nexus card,” whereby they need to file and pay a fee for a new personal information form every 10 years.

Currently, they must fill out that form and pay a fee every three years or each time they join a new company.

“We have a number of ideas that the community has helped us form,” McCoach said after repeatedly being heckled at the boisterous January 28 meeting. “We don’t have this thing solved.”

A heckler shot back, “That’s apparent.” •