Vancouver public relations veteran Laura Ballance is not welcoming the downturn in...

Vancouver public relations veteran Laura Ballance is not welcoming the downturn in the daily media industry.

“A lot of people find that’s a bizarre position for a publicist to take, but I would take a great journalist’s reporting on a tough story any day of the week, even if it’s uncomfortable for me on behalf of my clients,” said Ballance, owner of Laura Ballance Media Group. “I still want the ability to have fair comment and a well-reported story, so I feel like I’m always out here fighting for traditional media.”

Ballance, a reporter with CKNW AM 980 from 1988 to 1995, said that with layoffs across media, including closures of some newspapers, some outlets will not be able to resist the urge to fill space or time with more news releases, sometimes verbatim and unfiltered. To some in her industry, it is an opportunity to gain free placement, but it should also be a reason to supply better-quality content, she said.

“What we do is a lot about relaying information through the media to the general public, so as there continues to be less staff and less seasoned journalists, the role of PR to fill that gap will increase,” she said. “The burden of responsibility for making sure that information is presented with very high standards of accuracy is something that good PR companies will take as part of the moral contract with society and the role that we play.”

With the decline in paid, professional journalists, Ballance said, there is a corresponding rise of “influencers.” Influencers can take a variety of forms. Ballance said some are simply “people with a laptop and an opinion” who entered the media field with experience only as a speaker at a municipal hall meeting or a letters-to-the-editor writer. The trend, she said, emphasizes the need for professional training and discourse about professional standards and accreditation in the media.

Darian Kovacs, principal of Jelly Digital Marketing and PR Agency in Abbotsford, called the trend toward influencers to reach retail and product consumers “power to the people.” 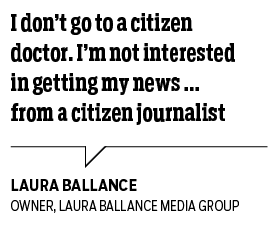 Kovacs said that increasingly companies want more accountability in coverage and return on investment. For those companies, he said, there are key questions when it comes to using influencers: Do you need to pay them, and, if so, how much?  What is it like to work with them?

At the same time PR agencies adapt to the changing media landscape, the geography of the industry is changing, too. The stature of the Fraser Valley will only grow as the city of Vancouver’s record real estate prices squeeze middle-income earners out of the market, said Kovacs, a Fort Langley resident.

“I wanted to work here as well,” he said. “I felt there was a lot of noise in Vancouver, a lot of busy-ness and competition,” Kovacs said. “The fact we set up shop in the Fraser Valley lets us stand out and be unique.”

Kovacs said Fraser Valley residents tend to want larger, single-family properties, rather than to live in condominiums, and they typically want to “grow” a family and put down roots. “Whereas in Vancouver they tend to be more transient.”

With a population shift, there will naturally be more businesses and consumers. For a company like Jelly, that also translates to having choice from a bigger talent pool.

As the metropolitan centre of the province shifts toward Surrey and points eastward, Abbotsford and Langley will outgrow their reputation as rural areas subject to lengthy commutes. Ballance said the valley will need to evolve as a distinct media market. The 2011 census showed that from Surrey to Chilliwack, there were 816,000 residents. That is greater than Winnipeg’s metro area and rivals Edmonton. The valley has strong community and ethnic newspapers but lacks a major presence. Traditional media centred in Vancouver need greater influence south of the Fraser River, and the minimal coverage means there is a “tainted view” of Fraser Valley issues and people, Ballance said.

“When you don’t have reporters in, say, Surrey, but you have to cover breaking news, what happens is you only get the bad-news stories out of communities,” she said. “There are lots of great things happening in communities all across the province. To have the population that is almost on par with Vancouver and not to have any of our mainstream media putting significant resources into reporting the day-to-day of those communities shapes how we see all of those communities.” •