Multimillion-dollar public-private sector project will include 2,600 homes, medical facilities, a SkyTrain station and even a farm

By Frank O'Brien | March 22, 2016, 6:00am
Onni Group will build up to 10 towers, some 28 storeys high, as part of the transformation of the former Vancouver Coastal Health property on Cambie Street in Vancouver | Chung Chow

A double-barrelled, $302 million land deal that triggered in 2015 and fired the last round this month represents the Onni Group’s largest B.C. project and might be a model for a private-public sector development in Vancouver.

It represents a multimillion-dollar construction play that will see a string of residential towers erected along Vancouver’s Cambie corridor, more than 400 units of low-cost housing, new medical and recreational facilities and the first SkyTrain station in Vancouver built completely with private money.

The deal involves 24.5 acres of prime land and a joint agreement between Onni and Vancouver Coastal Health (VCH), the original owner, with the close oversight of the City of Vancouver.

Onni has agreed to buy two parcels totalling 22.18 acres – 5.81 that run parallel to Cambie Street and 16.37 on the western portion of the site.

These will be developed into residential and retail and include amenities such as a park and an urban farm.

VCH will retain 3.2 acres that will be developed for health-care and community use, including a new residential care home, a community health centre, a new YMCA and a new therapeutic pool.

As well, 114 new subsidized homes for those with disabilities will be dispersed through the site.

Onni paid $85 million to VCH last year and closed on the remainder of the $302 million purchase on March 15.

It appears a win-win for all those involved.

All of the proceeds from the sale will remain with VCH for investment into health care facilities, including the replacement of outdated buildings.

“The redevelopment is a major project not just for Vancouver Coastal Health and the residents of Pearson Dogwood, but for the entire community,” said Mary Ackenhusen, president and CEO of VCH. 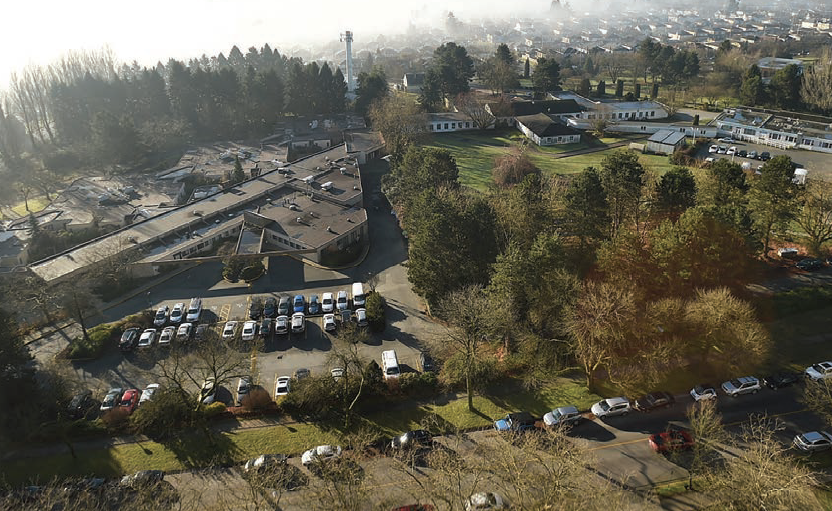 A 150-bed residential care home will be built to replace the old Dogwood Lodge. Construction is expected to start mid-2017 on that project. The following year, VCH anticipates construction on a community health centre will begin. VCH and Onni presented the rezoning application to the city on Christmas Eve, 2015.

“We stuck very close to the 2014 original agreement with the VCH and city,” Vaughan said. 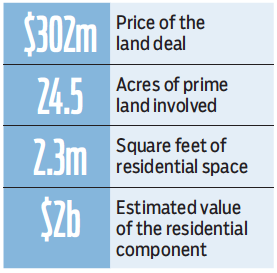 Under the terms laid out in that policy statement, Onni should hold a winning hand. The plan allows Onni, which has its own construction arm, to build 2.3 million square feet of residential and approximately 132,000 square feet of retail in up to 10 towers, some as high as 28 storeys. In all, Onni can build and sell 1,645 homes. It will also deliver 411 units of affordable rental housing. All Onni buildings will meet LEED (Leadership in Energy and Environmental Design) Gold standards and the city’s substantive sustainability requirements.

Based on current per-square-
foot prices for Cambie corridor condominiums, provided by Urban Analytics, Onni’s 2.3 million square feet of market residential alone could be worth north of $2 billion. Onni expects the development to begin construction and marketing in 2018.

As part of the agreement, Onni, with developer Concert Real Estate Corp., which now owns an adjacent 20.8-acre site, has agreed to pay for construction of a new Canada Line SkyTrain station, worth an estimated $30 million, on the corner of Cambie Street and West 57th Avenue.

Under its community amenity contributions to the city, Onni will also provide a 2.5-acre city park, a one-acre urban farm and a 69-space child-care centre.

Susan Haid, the city’s assistant director of planning for Vancouver South, said the project could produce homes for approximately 4,500 residents. She said the zoning application is generally consistent with the original policy statement but still requires city scrutiny.

“The application has to go through quite a rigorous process,” Haid said prior to a series of public consultations in February. “There’s a lot of technical review and consultation before we get to a public hearing at council.” •