A city-commissioned study has revealed 10,800 homes in Vancouver were left empty for more than a year in 2014.

A city-commissioned study has revealed 10,800 homes in Vancouver were left empty for more than a year in 2014.

But reasons for the vacancies and whether governments can do anything to penalize homeowners — or force them to rent their properties — remain open questions as the city continues to grapple with an affordable housing crisis.

The study by Ecotagious measured B.C. Hydro electricity consumption data collected from 225,000 of 280,000 homes in Vancouver from 2002 to 2014. The company concluded the rate of empty homes remained consistent from 4.9 per cent in 2002 to 4.8 per cent in 2014, which is in line with rates in the rest of the Greater Vancouver Regional District.

“It’s worth noting that during the same period, the benchmark price for apartments in the Greater Vancouver area increased 140 per cent,” Bruce Townson, the CEO of Ecotagious, told city council Tuesday. “And while an analysis of housing prices was outside the scope of this project, a quick comparison of the housing prices to the non-occupancy rate doesn’t suggest that there’s a correlation between the two.” 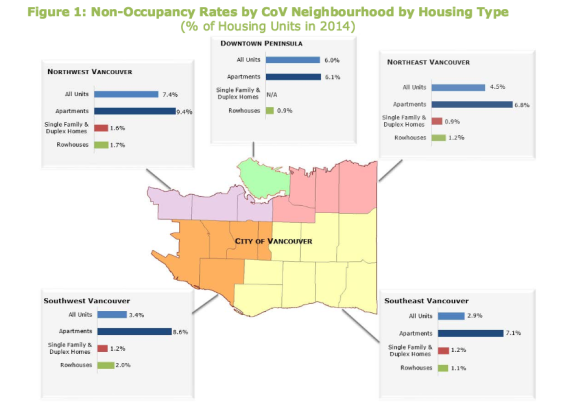 The majority of the empty homes in 2014 were apartments — 9,747 — and vacancy rates were highest on the West Side of the city, with 9.4 per cent in the area that stretches from Kitsilano to Point Grey and 8.6 per cent in neighbourhoods that include Kerrisdale, Dunbar and Southlands.

Suggested reasons for the vacancies included a home was bought for investment, was under renovation, the owners were on vacation, the home was caught up in an estate sell-off, or it was being flipped. A home was deemed empty in a given month if the hydro data showed a flat consistent use of electricity for 25 or more days in that month for a year. The findings were not specific to neighbourhoods but separated into five large geographic areas. Basement suites were not included in the study.

The highly anticipated report, which attracted a large crowd of media to city hall Tuesday, was believed to provide Vancouverites with an answer or clue to what is driving the city’s hot housing market. Instead, the data supplies the city with information that it can use to develop policy aimed at building more rental housing in Vancouver.

Although the study concluded the overall rate of empty homes held steady for 12 years, the findings showed the number of non-occupied properties increased from 8,400 in 2002 to 10,800 in 2014.That increase is what concerned city council Tuesday when discussing what powers the city had to open up vacant homes for renters.

“That’s the bigger concern,” said Mayor Gregor Robertson, pointing out the average increase of 200 homes per year over the study period. “We know that there are thousands of units of empty homes that potentially could be available for rental. We have one of the tightest rental markets in the world right now – almost zero vacancy across the city.”

Councillors Geoff Meggs and Andrea Reimer suggested the way to get renters into those homes may lie with restrictions governing strata councils, which prohibit owners from renting their homes. Meggs said it’s been an issue for many strata councils and recommended the provincial government make the necessary changes under the Strata Property Act to remove restrictions.

“That’s going to be a bit of a tricky problem for the province to try and untangle, but it’s one that they should try to do because we do need these units in the rental stock, notwithstanding they may end up being owner-occupied at some point, ” Meggs said.

Municipalities have limited tools to penalize homeowners with taxes or force them to rent their empty homes. The mayor successfully moved a motion Tuesday that he write a letter to Premier Christy Clark to reiterate a request he made in May 2015 to give municipalities the power to track property ownership and “ensure timely occupancy of vacant units.”

Mukhtar Latif, the city’s chief housing officer, told reporters after the council meeting the city’s goal in opening up empty homes is to “help homeowners make use of the asset, as much as anything else. If there is a barrier, we want to be able to help them bring that unit back into use.”

Other cities around the world, including those in the United Kingdom, Netherlands and the United States have levied taxes on absentee landlords and created registries of empty homes. More detail on those schemes and how they might apply to Vancouver is expected to go before council in a report later this year.

“I sort of feel like we’re in a C.S.I. episode but we don’t have all the tools we need to figure out what’s actually killing affordability in this city,” said Reimer, who will soon be on the hunt for another home to rent in Vancouver.