Compensation in store for hundreds of Cambie merchants

By Glen Korstrom | April 22, 2016, 1:10pm
Former Festival Cinemas owner Leonard Schein, who estimates that he lost $200,000 because of Canada Line construction, has since sold his Park Theatre and retired | Chung Chow

Hundreds of small-business owners who suffered through noise, dust and fencing that impeded customer access while the Canada Line was being built along Cambie Street are eligible for compensation.

The catch is that they have to file a claim by May 31, Bennett Mounteer LLP partner Paul Bennett told Business in Vancouver, adding that forms necessary to make claims are on his website.

Small-business owners must fill out the form and attach financial records to prove that their businesses were performing better before Canada Line construction launched than during the construction period from 2005 to 2009.

A BC Supreme Court decision in November found that although the merchants affected by construction couldn’t sue the SkyTrain line’s builders for any loss of revenue, they could sue if they could prove that their leases or properties were devalued during the construction.

They would do this by proving that they endured some business losses.

A 50% drop in business, for example, would be a strong argument that the lease’s value also dropped by 50%, said Bennett, who is heading the class action that prompted that judgment.

“There is no determination yet for how [lease devaluation] is going to be measured,” he said.

Bennett explained that Justice Christopher Grauer determined in November that the only practical way to build the Canada Line was to use the controversial cut-and-cover method that chewed up the street, making the entire strip undesirable for shopping.

The line’s builder, SNC-Lavalin (TSX:SNC), also had provincial government approval to use that construction method, Grauer ruled. The result: SNC-Lavalin, regional transit operator TransLink and the company in charge of managing the line, InTransitBC, were not liable to pay merchants any compensation. 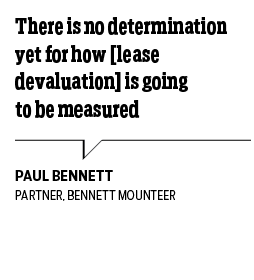 Grauer, however, agreed with the merchants’ second argument, which was that they had overpaid for their leases in many cases because their properties’ values were diminished during construction.

“We were the guinea pigs for cut-and-cover construction, and it turned out that it really didn’t work well,” said former Festival Cinemas owner Leonard Schein, who was one of the more vocal tenants who suffered losses during the time.

“I remember Christy Clark at that time was a radio host on CKNW, and she was saying how terrible the situation was and that the provincial government should stand up for small business and compensate businesses for what they lost. After she became premier, no, we didn’t get compensated.”

Schein, 68, estimated that his Park Theatre on Cambie Street lost approximately $200,000 in revenue during the construction.

He has not yet worked out exactly how much he believes his lease on the cinema would have been devalued but he estimated that it would be tens of thousands of dollars.

Schein has since retired and sold his lease on the cinema to Cineplex Inc. (TSX:CGX).

One tenant who is not eligible to claim that her lease was devalued is Hazel & Jools owner Susan Heyes, who launched a separate individual lawsuit against the Canada Line builders and is therefore not eligible to be part of the class-action lawsuit.

Heyes, who runs a maternity-wear store, won a $600,000 judgment in BC Supreme Court and then lost that award when the defendants appealed.

One possible legacy of the continued legal wrangling over construction of the Canada Line is that governments have vowed that if the Broadway subway line is approved, it will not involve cut-and-cover construction. •