By Bob Mackin | April 19, 2016, 6:00am
Abandoned Rogers Arena plaza in wake of the Canucks’ failure to qualify for this year’s NHL playoffs, but other events are filling the local entertainment void | Photo: Chung Chow

Much to their chagrin, the Vancouver Canucks are in familiar territory.

For the 18th time since joining the National Hockey League in 1970, there will be no Stanley Cup playoff hockey in Vancouver. The 2006-07 to 2014-15 period was the franchise’s most successful. It included three second-round playoff appearances and the notorious 2011 season, when the team fell one win shy of bringing home the Stanley Cup for the first time in its history. The hottest ticket in town meant downtown restaurants, bars and hotels were packed before and after games. Now, not so much.

There are many more vacant seats on the bandwagon as the club rebuilds, and other sporting events are picking up the slack – so much so that 2016 could be a watershed year for the region’s sports economy.

“There’s a lot going on, and [establishments] can take advantage of that business, aside from relying on the 41 Canucks home games and fingers crossed with some playoff games, as was happening in years previous,” said Tourism Industry Association CEO Walt Judas.

The Canadian Soccer Association could be under pressure to delay its return to Toronto’s expanded BMO Field, the de facto national soccer stadium. Rugby Canada returns with a 15-a-side test match against Japan on June 11.

The Vancouver Whitecaps expanded their ticket inventory by 1,500 per game; they claimed more than 27,000 tickets were distributed for an April 2 visit by the Los Angeles Galaxy.

“Roxy’s still the Roxy; even without hockey, people still end up there during the night,” concedes Granville Entertainment Group CFO Ron Orr. “There’s always something going on. There’s a certain amount of disposable income, and if people don’t have hockey to go to they still go out, they’ll go drink and do what they do.

“We used to have 20 [Canucks] season tickets that we would use in our hotel [Comfort Inn Downtown] for hockey packages, and we have been slowly weaning off that as the demand has dropped. You fill that void with something else; you adapt your business plan and look at other interesting things going on.”

“It’s doing what it is designed to do,” Judas said. “It’s been doing it for years, but now in a more deliberate and magnified way.”

Rogers Arena won’t be dim this spring. Paul McCartney starts a tour there April 19–20, followed by Rihanna, The Who, Stars on Ice, City and Colour and James Taylor. 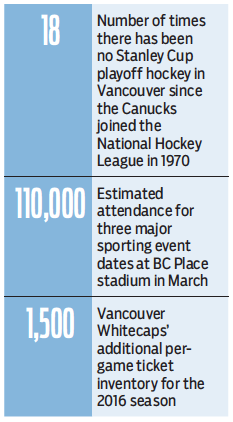 Further, downtown sport-skewed establishments ruing the lack of Canadian teams in this year’s Stanley Cup playoffs can look forward to viewing parties for the Copa America, featuring the top soccer nations of the Americas (June 3–26), and Euro 2016 (June 10–July 10). Judas said international tourists will be looking for places to watch their favourite teams, yet another opportunity.

Charles Gauthier, CEO of the Downtown Vancouver Business Improvement Association (DVBIA), said big sports events will be more important than ever in keeping downtown animated. An infusion of luxury retail customers, many from China and the U.S., are drawn by Nordstrom (NYSE:JWN) and other big-ticket stores.

“If that market suffered, it could have an impact on visitations downtown,” Gauthier said. “We need to make sure we don’t become too singular in our focus.”

Another wild card is on the horizon.

The Parq casino and hotel complex on BC Place’s west side, which is under construction, is scheduled to open in early 2017.

Gauthier said it will force DVBIA members in Yaletown and the Granville Entertainment District to be more innovative and competitive. Additionally, with an increase in high-quality shopping and hospitality offerings in the suburbs, and less-expensive housing, “the bridge-and-tunnel crowd is not going to be their bread and butter going forward.” •