By Glen Korstrom | April 29, 2016, 4:00pm
Ivanhoe Pub general manager Rod Keats managed to get the government to waive a $7,500 fine against his establishment for serving a minor | Chung Chow

Despite a vow by the B.C. government to keep revenue steady from liquor sales, there is one area where Victoria is OK with taking in less cash: fines that it levies against liquor retailers for serving minors.

The B.C. government generated $262,500 from those fines in 2015, according to the Ministry of Small Business and Red Tape Reduction.

The reduced revenue comes largely because the government has been sending fewer minors into establishments. There were 135 attempts by government-employed minors to buy booze in 2015 versus 555 attempts in the 2012-13 fiscal year, according to the government’s data.

The trend follows hospitality-sector complaints in 2013, when restaurateurs were upset with government “entrapment” that involved employing minors who looked older than they were and sending them into restaurants and stores to attempt to order alcohol.

For a small restaurant, that’s “equivalent to one and a half months’ profit,” Fuller told BIV at the time .

He told BIV on April 25 that Earls has not had any recent fines for serving minors, and that he believes the government is responding to industry concerns on the issue.

“They’re being more even-handed and deserve some kudos,” he said.

Fines remain at $7,500 but the government has shown more willingness to waive fines if business owners can prove that they have appropriate screening.

Ivanhoe Pub general manager Rod Keats told BIV that he was able to have a fine waived in January after demonstrating that he has sufficient training and processes in place to deter underage drinking. 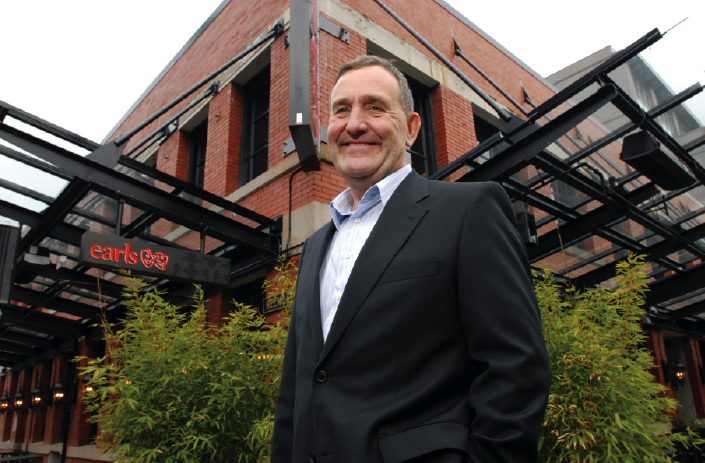 (Earls Kitchen + Bar owner Stan Fuller believes the B.C. Liquor Control and Licensing Branch is being more "even-handed" in its way of levying fines for not asking minors for identification when they attempt to buy alcohol | BIV archives)

“The minor who came to our place was six foot two or three and the server was five feet tall,” Keats said. “You don’t expect someone to be that tall and 18 years old.”

Despite lower revenue from these fines, the B.C. Ministry of Justice’s liquor control and licensing branch (LCLB) operates on what the ministry calls a “cost recovery” budget of about $11.5 million.

That budget is a drop in the bucket compared with the $3.13 billion in revenue and $898 million in profit that the Crown corporation British Columbia Liquor Distribution Branch (BCLDB) is expected to generate in the current fiscal year.

All of the BCLDB’s profit gets pumped into government coffers as general revenue.

One theory for why the government has reduced the size of its Minors as Agents Program (MAP) is that Victoria’s many changes to liquor laws in the past couple of years have angered liquor retailers, said David Eby, who is the NDP’s liquor policy critic.

“The reality is that when you add massive fines and undercover investigations on top of that, it might be enough to drive them to support another political party,” Eby said.

“Whether or not it’s good politics, it’s not good for public health and safety to reduce inspections at the same time that you increase access.”

Examples of increased access include allowing sales at farmers markets and in grocery stores .

The government carried out 17 inspections of its own stores in 2015, noting five cases where a minor was able to buy alcohol – a 71% compliance rate.

“These are targeted inspections, not a random sample,” the Ministry of Small Business and Red Tape Reduction told BIV in an email.

“While random inspections also occur, the program focuses on inspecting places that are the subject of complaints or are suspected of selling to or serving minors.”

BIV last asked the government for statistics in 2013 for its MAP inspections and the LCLB provided numbers for the 2012-13 fiscal year.

Unlike the government, the private firm employed young adults, not minors, as alcohol buyers.

Sting completed 11 inspections in March and found that store clerks asked for two pieces of identification five times for a 45.5% compliance rate. In all cases except one, however, the clerk asked for at least one piece of identification.

“We will follow up on our procedures,” said Save-On-Foods president Darrell Jones in an email. •