For low-income earners, it’s harder to crawl out of poverty than it was 20 years ago

Over the past 20 years, fewer Canadians are falling into low income but fewer are able to...

Over the past 20 years, fewer Canadians are falling into low income but fewer are able to crawl out of poverty.

Statistics Canada looked at tax filers between the years of 1992 and 2013 to see how many entered and left what is considered low income.

“This means that poverty has become more 'sticky' over the past 20 years,” said Krishna Pendakur, professor of economics at Simon Fraser University. “Although the fraction of families that are poor hasn't changed much, there isn't as much churn in and out of poverty as there used to be.”

Statistics Canada uses low income to provide some information on people who may be at risk of poverty, as well as the nature and extent of it. While poverty is an imprecise and arbitrary measure that is difficult to define, StatsCan defines low income as half the median income, adjusted for the number of family members. 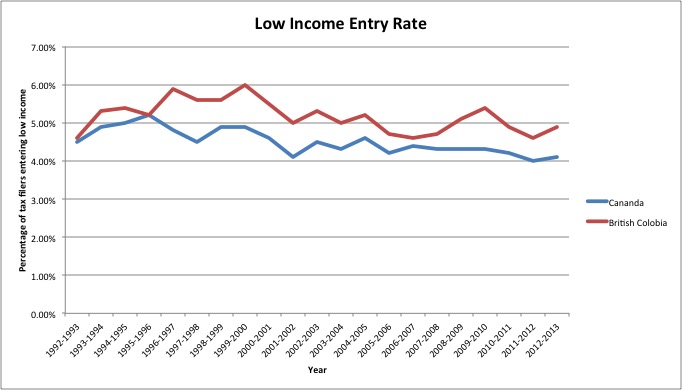 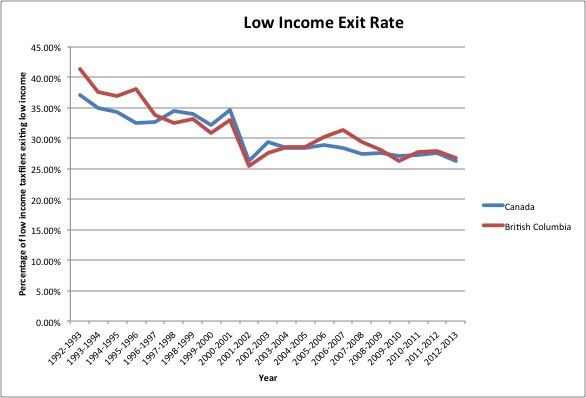 Over the last 5 years studied—2008 to 2013—British Columbia consistently had more people entering low income than the country as a whole, while having roughly the same exit rate. This trend has been occurring since 1993, when the study started.

Brian Murphy, special adviser for Statistics Canada’s income and statistics division, said people usually enter the low income category when they lose jobs or when there are changes in the “family formation.”

“Getting a job or getting married is a good way to exit low income, and getting divorced or losing your job can be a way to enter low income,” Murphy said.

He said the low income program is there to identify groups of Canadians who are at a higher risk of poverty so that social programs can be designed for them. Murphy likened it to how Canada solved the problem with poverty among the elderly in the 50s with programs like Old Age Security and the Canadian Pension Plan.

Pendakur said the StatsCan data has implications for society as a whole.

“We are collectively worse off if some families are stuck in poverty for long periods of time than we are if a larger number of families experiences some spells of transitory poverty,” Pendakur said.