New office has capacity for 750 employees; second office will keep its 180 staff

The company held a glitzy ceremony earlier this month to mark moving into a new 142,000-square-foot office on the top two floors of Pacific Centre. That site, the Microsoft Canada Excellence Centre, can accommodate about 750 workers but only 388 employees are working at the site.

Many of those workers are new hires, and the Seattle-based software giant continues to hire software developers to work in its new Vancouver building.

Consolidating offices and moving 180 video-game developers to Pacific Centre from across the downtown peninsula is not an option, however, according to excellence centre director Edoardo De Martin.

“It takes about three years to make that particular [Gears of War 4] product so you can’t have any leaks,” De Martin told Business in Vancouver.

Were the video-game development team to move to Pacific Centre, other Microsoft staffers might see Gears of War 4 storyboards or otherwise hear aspects of the game’s storyline, he said.

That’s why the decision was made to keep the 180 staff at a 36,000-square-foot office at 858 Beatty Street, which is known as the Pivotal Building.

When work on Gears of War 4 completes this fall, the team is expected to then move on to develop Gears of War 5, De Martin said.

The interactive TV project stems from a pact that Microsoft has with the National Football League (NFL). Microsoft’s NFL app streams games and allows users to navigate in a separate screen to get statistics on specific players.

For users in fantasy football leagues who keep track of a virtual team of players, the app automatically updates all the statistics for that pool.

Some Pacific Centre workers will also work on HoloLens, which is a new Microsoft initiative that involves what executives call “mixed reality.”

HoloLens blends 3D holograms with the real world. Users wear special glasses that allow them to see the holograms to get a sense of their real-world context and scale.

Other Pacific Centre workers will focus on MSN news curation for people with Microsoft tablet computers and others on the Windows operating system who see news automatically stream in tiles when they turn their computers on.

Future work at Microsoft’s Pacific Centre office is also likely to stem from the company’s US$26.2 billion purchase of LinkedIn.

“The deal has to get finalized,” De Martin said. “When that happens, we’ll start talking about what work we can do with LinkedIn. We have the largest professional cloud service in the world, and when you take the largest business networking system in the world and put them together, enterprise software and business software is what we’re known for, so you’ll have a perfect marriage.” 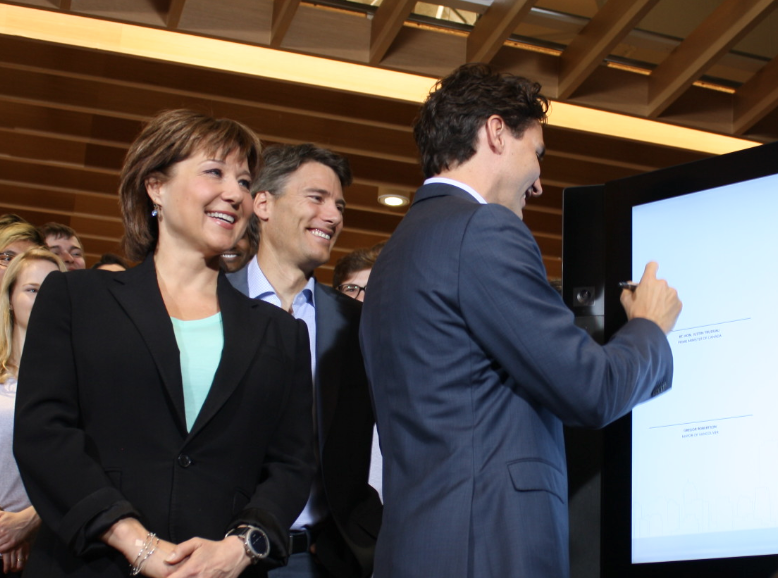 “Our conversation is just beginning because the next step is to figure out how we can make this the Microsoft Canada headquarters,” Clark said in her speech.

Microsoft president Brad Smith then told BIV in an interview that he is “thrilled” at the idea of moving the company’s Canadian headquarters to Vancouver.

“[But] there’s 32 million people in Canada so we also have to pay attention to where they live and not just to where we want to vacation.” •