Restaurateurs partner with charities for events with wow factor

By Glen Korstrom | June 30, 2016, 4:50pm
A second gondola cabin passes behind a cabin where diners were finishing the meal with a Hennessy cognac | Glen Korstrom

Restaurateurs are constantly dreaming up new ways to market their restaurants and wow customers, but rarely do they host functions as exclusive and novel as June 25’s SkyHigh.

That event was part of a trend where restaurant owners partner with charities to create a wow factor and lure diners who normally might not pay steep prices for tickets.

At SkyHigh,  260 people consumed a five-course dinner while seated on 26 Peak2Peak gondola cabins that made multiple trips between Whistler and Blackcomb mountains.

Temporary chandeliers were added to the gondola cabins and gondola speed was slowed to prevent cutlery and plates from sliding off the tables.

Diners ate each course during 18-minute trips between the mountains while staff at kitchens on each mountain had approximately 80 seconds to enter the gondola cabins, clear plates and bring the next serving and wine selection.

The normal travel time is 11 minutes. 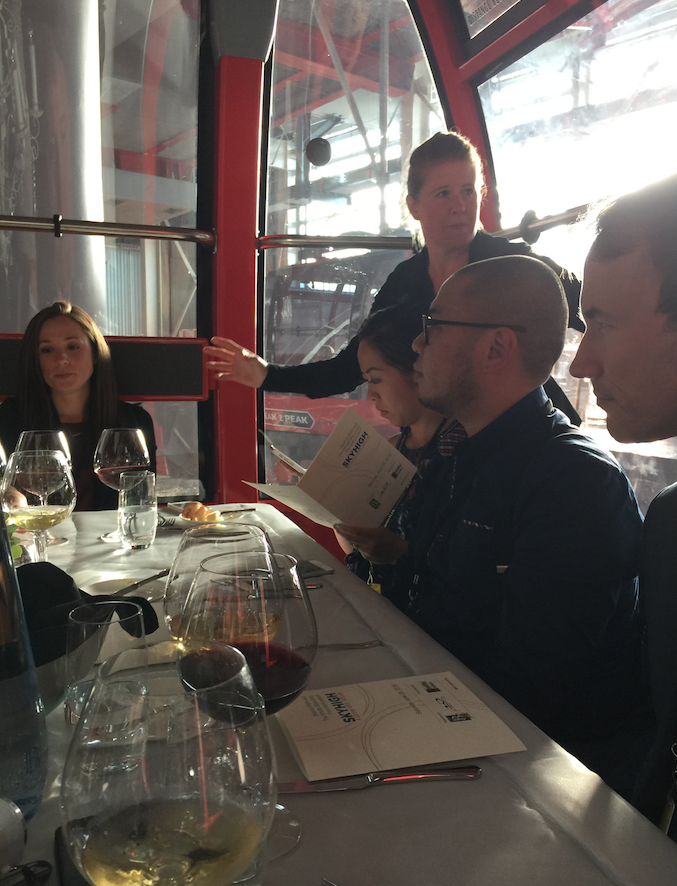 Companies that paid $8,500 per cabin could invite up to 10 people to dine on food provided by Whistler’s Bearfoot Bistro; event proceeds after costs went to the Whistler Blackcomb Foundation (WBF).

“In our business, we need to always stay top of mind and, at the same time, we need to recreate ourselves and find ways to make the news and create an experience for the guests,” said Bearfoot Bistro marketing manager Marc Des Rosiers, who came up with the idea during a brainstorming session in early 2014.

He approached Whistler Blackcomb Holdings Inc. (TSX:WB), which owns the mountain and the gondola, and company executives liked the idea of a culinary event on the Peak2Peak, particularly if a charity was involved.

Des Rosiers approached the WBF, which provides financial support to registered non-profit organizations in the area, and the tripartite partnership was hatched.

(Video: Diners in one of the gondola cabins enjoy their first course with some Moët champagne | Glen Korstrom)

The first SkyHigh event was held in June 2014, and the three parties decided to skip the event last year in part because of the immense amount of work involved.

“You don’t necessarily want to do this every year,” Whistler Blackcomb CEO Dave Brownlie told Business in Vancouver during a reception before the event.

“But it’s a fun event that raises a lot of money for charity, and it is a unique, once-in-a-lifetime experience that you just cannot find anywhere else. You can’t just go out and buy something like this on any Saturday night anywhere in the world.”

SkyHigh is not the only innovative dining experience that Bearfoot Bistro has embarked on through the years. 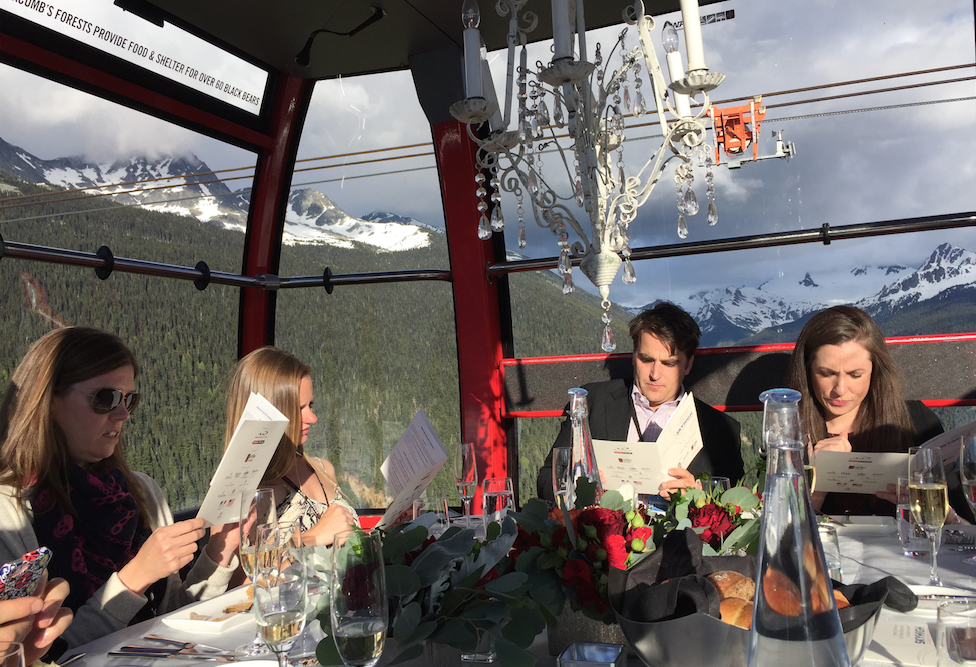 In late 2013, it partnered with Vancouver’s Market By Jean-Georges. Staff at each restaurant packed up the furniture and moved into the other restaurant. The restaurants’ kitchen teams then took over the other restaurant’s kitchen and served their food to guests at a one-night-only function.

“It is important for restaurants to be innovative,” said Richard Wolak, who is owner and editor of VancouverFoodster.com.

“For a lot of the events, though, unless there is a charity involved, it is not going to happen.”

Many restaurant owners partnered with the Vancouver Aquarium on June 23 to raise more than $460,000 at its annual gala. The aquarium plans to use the money to fund research and educational programs.

Guests then ate a six-course meal while seated at tables placed among the aquarium’s many large fish tanks. 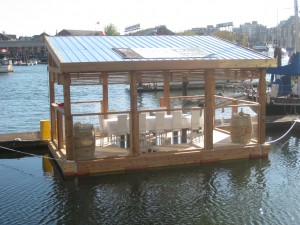 One of the more innovative dining events that Wolak remembers was in 2010.

The now-closed C Restaurant partnered with the School of Fish Foundation, which aimed to raise $100,000 and use the money to educate chefs about sustainable seafood and the importance of healthy oceans.

School of Fish organizers built a 20-foot by eight-foot dining room on False Creek near the foot of Howe Street, outside what was then C Restaurant and is now Ancora.

The floor was composed of 1,700 plastic bottles that were recovered from the ocean. The entire structure was built with renewable, recycled, reclaimed or repurposed materials.

A table was then set up inside the temporary structure and was outfitted with a linen tablecloth, fine china and crystal.

“That was one of coolest and most memorable dining experiences that I’ve ever done,” Wolak said. •