By Nelson Bennett | June 7, 2016, 6:00am
“The price of food will go up – it just has to,” says Discovery Organics general manager Damien Bryan of the threatened loss of Vancouver’s Produce Row as the city ponders the conversion of Malkin Avenue into an arterial | Chung Chow

It’s midnight when the first semi tractor-trailer of the day arrives on Malkin Avenue, three days after leaving a farm in California, laden with fresh lettuce and tomatoes.

It stops and backs in off the street towards the loading bay of FreshPoint Vancouver’s distribution warehouse, one of six large produce wholesaler-distributors clustered along a three-block stretch in this light industrial district.

After it unloads, warehouse workers load it back up with fruits and vegetables, delivered previously, and the driver heads off to Kelowna, Calgary, Winnipeg or Whitehorse.

By the time it leaves, dozens of buyers for local restaurants and grocers will have arrived early in the morning to buy their daily produce from the various wholesalers.

By 6 p.m. the lettuce and tomatoes that left California three or four days earlier are in a salad bowl on your dinner table.

Welcome to “Produce Row,” a warehouse district that has, for half a century, served Vancouver and Western Canada as the produce distribution hub for smaller independent grocers and fresh produce markets, such as Kin’s Farm Market, T & T Supermarket and the Granville Island Public Market.

This hub is now in danger of being edged out of Vancouver, taking with it 1,000 jobs, an estimated $700 million in annual revenue and a logistical advantage that helps keep the time and cost of produce delivery down.

Read: Produce Row born on the wrong side of the tracks

The City of Vancouver has identified Malkin Avenue as one of two preferred routes for a new arterial road to replace Prior and Venables streets.

At least four of the six larger wholesalers may have no choice but to move to Surrey or even farther afield – presuming they can find suitable light industrial land –  because there is no way the semi trucks that deliver produce will be able to back in off the street in heavy arterial car traffic.

If the produce wholesale and distribution cluster is broken up, there could be a domino effect that could drive up food prices, warns Damien Bryan, general manager of Discovery Organics, which moved to Malkin Avenue a year ago but now faces the prospect of having to relocate again.

Buyers typically pick up their fruit and vegetables every morning before grocery stores and restaurants open. Malkin Avenue is so central that it allows them to purchase produce not just from one wholesaler, but from several, and get their produce on the shelves before opening each day.

“Let’s just say now that that business is in Cloverdale or Abbotsford or Langley,” Bryan said. “You’re driving an extra hour – and sometimes an hour and a half – to do that process.

“What that means is … more trucks on the road. It’s always going to be in peak hour because people need produce delivered first thing in the morning, and the price of food will go up – it just has to.” 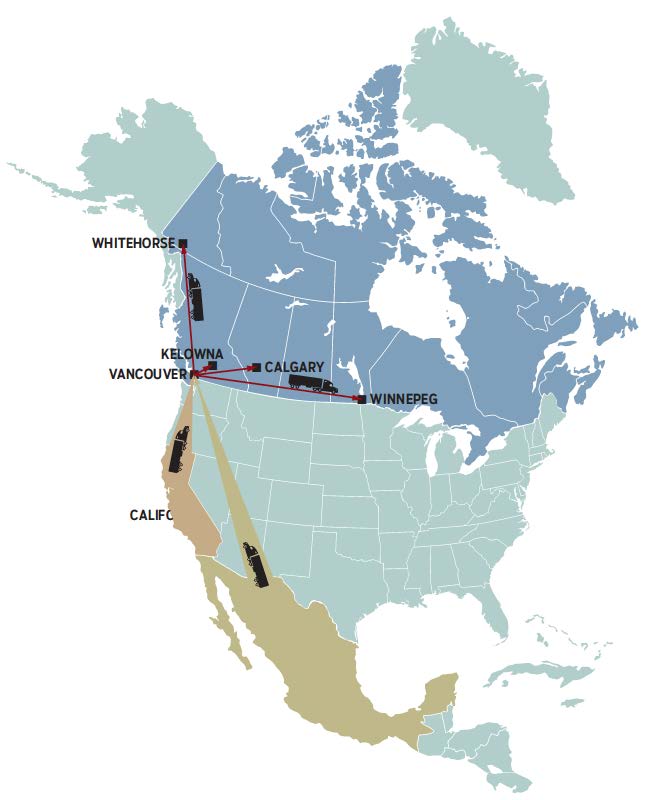 Produce Row businesses originally concentrated on Malkin Avenue because of rail access. And now rail access is what may push the wholesalers out of Vancouver.

Produce Row started with wholesalers serving Chinatown restaurants and grocers, which located on Malkin in part because it was next to the False Creek Flats railway yards. Produce used to come in by train.

Over the years, the movement of fruits and vegetables has shifted to semi tractor-trailers, with the bulk of the produce coming from Mexico and California. 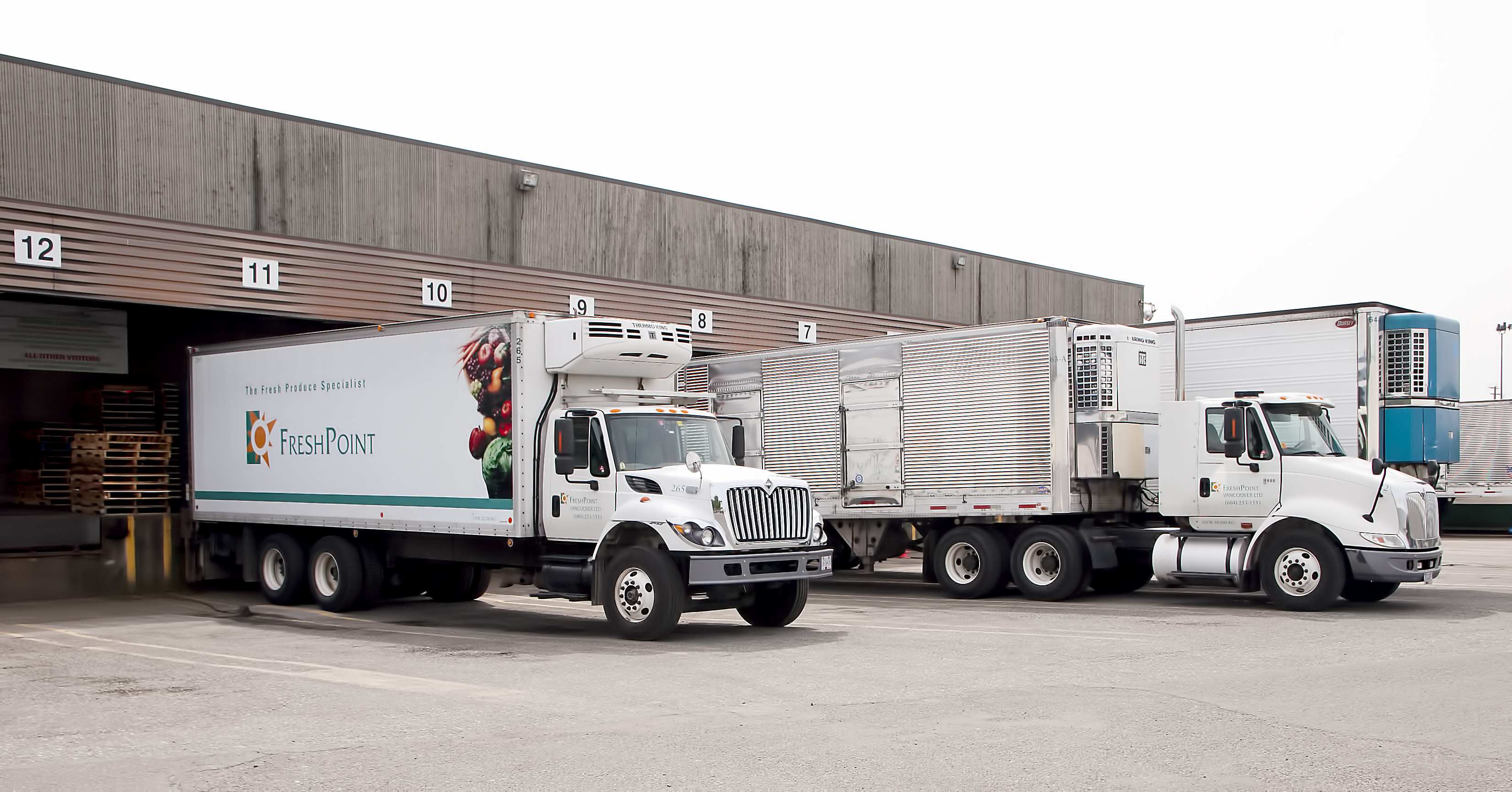 Produce wholesalers along Malkin Avenue have street-facing loading bays, which would present a problem for large trucks getting in and out if Malkin becomes and arterial road. | Chung Chow

Many of these businesses have been in the same spot for decades. Bryan Uyesugi, president of FreshPoint Vancouver, started work 46 years ago, when he was 17, with FreshPoint’s predecessor, Pacific Produce.

Many of his 280 employees have worked there for decades as well, and the majority of them live close enough to walk, bike or take public transit to work. If he is forced to move, he expects he would lose most of his workforce.

Discovery Organics would also lose most of its employees, said Bryan, who estimates 70% of his 50-plus workers bike, walk or take public transit to work.

“You’ve got 50 years’ worth of employees who’ve built their lives around living in that area so they can get to work quickly and easily,” Bryan said. “We have a predominantly young staff. Seventy per cent don’t have cars or a licence. So we would lose a huge core of our staff if we had to move.”

“This city, it advocates [that] people live in the community where they work,” Uyesugi said. “They would be doing exactly the opposite here.”

Brian Uyesugi, president of FreshPoint Vancouver. The business employs 280 people, many of whom bike, walk or take transit to work | Chung Chow

Wholesale businesses on Malkin Avenue aren’t the only ones worried about their business – so are their buyers.

Every morning, around 8 a.m., Emerald Earth Foods, a distributor based in North Vancouver, sends a delivery truck to Produce Row to load up on fresh fruits and vegetables and deliver them to 80 restaurants on the North Shore.

If some of the larger wholesalers are forced to move, Emerald Earth owner Felix Roesner fears there will be a long gap before they are up and running again. He’s also concerned there could be a temporary food shortage.

He also fears the loss of a logistical advantage of having a hub within easy driving distance.

“It would screw up the whole system,” Roesner said. “If all those suppliers have to move out of the city, a time-wise logistic problem would be – for me – that I wouldn’t be able to get to them on time anymore.”

Run by the Potluck Café Society, the non-profit caterer supplies food for several soup kitchens and social enterprises in the Downtown Eastside.

Downtown Eastside Kitchen Tables spends $1,500 to $2,000 each week buying fresh produce at Produce Row. Not only is having wholesalers clustered in one place good from a logistics standpoint, it also provides competitive pricing, because the wholesalers compete against each other, to the benefit of buyers.

“If they don’t like the colour of my bananas, they’ll just go down the street,” Uyesugi said.

Chow said that if Malkin Avenue wholesalers were to be dispersed, “it would make it almost impossible for us to pick up food from anyone without being able to do cost comparisons.”

“Also, it would make it financially unviable for us to go and pick it up,” she said. “It’s so close that it doesn’t cost us a lot in order to go and get the produce.”

“It’s not just the Downtown Eastside that Produce Row supports,” she added. “It’s also non-profits and charities across Vancouver that go to pick up food from Malkin Avenue.”

Food security discussions often focus on where the food comes from.

Sometimes missing from the discussion is how that food gets from the ground to the plate.

In Vancouver, Produce Row is an important part of the produce pipeline. About one-third of the produce that moves out of the wholesale hub’s warehouses serves the Greater Vancouver market.

Malkin Avenue presents a dilemma when it comes to Vancouver’s food security, however, because it is here where the growing and the distribution butt up against one another.

The wholesalers and distributors here might not have to relocate if Malkin Avenue can be widened enough to allow truck traffic to continue to move in and out of a busy arterial.

“We could shift the street north,” said Lon LaClaire, director of transportation for the City of Vancouver.

But along the north side of Malkin Avenue are community gardens.

“Even though the city’s right-of-way is currently deemed kind of gardened on, at this point, the general direction is that we’re not going to move into the community gardens,” LaClaire said.

And without that shift north, it will mean two or three wholesalers will likely have to relocate.