Channel-surfers stumbling upon Star Trek: The Next Generation during the 1990s likely caught Capt. Picard and crew putting the ship’s holodeck into action on most episodes.

The 24th century technology used holograms to transform a normal room into anything from an Old West town being preyed upon by bandits to a Sherlock Holmes novel come to life.

The HoloLens projects three-dimensional digital images into one’s field of view as if it were appearing before them in real life. For example, designs for a jet engine could be transferred from a computer into a HoloLens to make it appear at full scale in front of the user.

Microsoft selected Finger Food as one of eight global agencies  –  and the only one in Canada  –  for its special program aimed at developing holographic apps for the HoloLens. The studio has 20 headsets at its disposal – more than any other company outside of Microsoft, according to Peterson – and is leasing a 26,000-square-foot facility to help “build some of the biggest holograms in the world.”

“If you think about what we’re doing for our clients, we’re creating holodecks for them,” Peterson said, adding Finger Food has since trademarked the Star Trek term for the facility after a lawyer found the holodeck trademark had lapsed.

“We’re able to quickly realize their imagination in a real format.”

A developers’ edition of the headset was released in the spring, but the consumer model has yet to have a release date.

Last year, Microsoft CEO Satya Nadella said at a Dreamforce conference that it could be five years before a consumer model is ready. 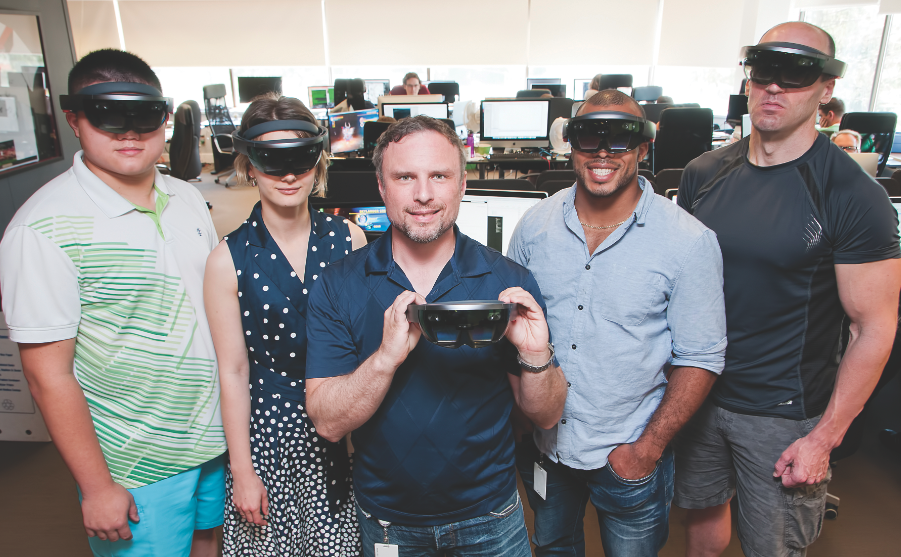 “Microsoft claims that it’s only going to be an enterprise product for the first five years. I think they’re just trying to undersell it so they don’t have to deal with bad earnings reports or something later on,” said Mack Flavelle, founder of Vancouver-based virtual reality consultancy firm Hammer and Tusk.

Flavelle, a father of two, said having small children often precludes him from inviting friends.

“But when I brought the HoloLens home from work for two weeks, I literally had more friends over in those two weeks than I had in the six months previous to that,” he said. “The HoloLens is deeply limited, but if you can extrapolate the future out of that, it’s incredible.”

Among the issues, according to Flavelle, is the field of view is small and the device is uncomfortable to wear. But if Microsoft takes its time before the HoloLens reaches the masses, those points may not matter much to the enterprise market.

“Most people that work in what we call enterprise are in the business of moving information from one place to another,” Flavelle said. “The HoloLens makes moving information significantly more efficient, which is why I think it will work so well.”

“You’re not going to make money developing an entertainment experience, but enterprise, because it’s cost savings … there’s a massive ROI,” he said. “Instead of three designs, you can go through maybe 300 designs at significantly reduced costs.”

Peterson estimated one client working on a $100 million project would save $9 million annually due to reduced design costs.

“We’ve really pivoted our whole business around this. In Vancouver, we’re getting global 500 clients. We have a list of them – we can’t keep up to the business,” he said. “We’re going to double our revenue this year.”