By Glen Korstrom | July 22, 2016, 5:30pm
Representatives of six countries and the European Union have written a letter to Premier Christy Clark, suggesting that the government's policy of wine in grocery stores contravenes trade agreements | Glen Korstrom

The number of grocery stores that sell B.C. wine on shelves is rapidly expanding across the province, despite a City of Vancouver moratorium on such sales and increasing diplomatic angst from Canadian trade partners.

Overwaitea Food Group (OFG) launched wine sales at its eighth Save-On-Foods grocery store in Parksville, on July 15, and OFG president Darrell Jones told Business in Vancouver that he expects to have wine sales at a ninth store, in White Rock, in early August.

“A wine section will also open in our Prince George store later this year,” Jones said.

Jim Pattison Group-owned OFG had previously launched wine sales at two Save-On-Foods stores in Surrey, two in Kelowna and one each in Tsawwassen, Langley and Maple Ridge.

All of those stores operate under operating agreements that OFG has with the British Columbia Wine Institute to use its licences.

OFG bid to buy all six wine-sale licences that the B.C. government put up for auction in late April and early May. In each case, however, it was outbid by Toronto-based rival Loblaw Companies Ltd. (TSX:L), Jones said.

“At some point it gets beyond being a good business decision for us although that’s not to say that it wouldn’t be good for somebody else.”

Neither he nor the B.C. government would say how much the winning bids were.

None of the wine-sale licences have yet transferred to Loblaw because the winning bidder only wins the right to go through the application process.

Only when the government approves a location for a new wine store, or section of a grocery store, is the licence transferred.

The government then will reveal the winning bid price and the winner will pay the money to government, explained Ministry of Small Business director of communications Bill Anderson.

If the winning bidder is unable to have a location approved, the second-highest bidder will get the chance to do so.

Anderson said that the government will auction up to 12 more wine-sale licences, although he would not provide a timeline.

To participate in the BC Auction auctions, bidders must be pre-screened grocery store owners who have, or will have, a minimum 10,000-square-foot store that primarily sells food.

The store may be located anywhere in the province – even if there is a liquor store next door.

The issue of wine on grocery store shelves has been controversial with municipal governments, domestic winemakers, consultants and international trading partners.

The City of Vancouver voted last year to conduct a comprehensive review of wine in grocery stores before it approves any stores to conduct those sales.

That decision followed OFG-owned Urban Fare applying to have a wine section at its store on Alberni Street and Non Partisan Association councillor George Affleck lobbying  for the city to have a lenient approach to approving wine sections for grocery stores. 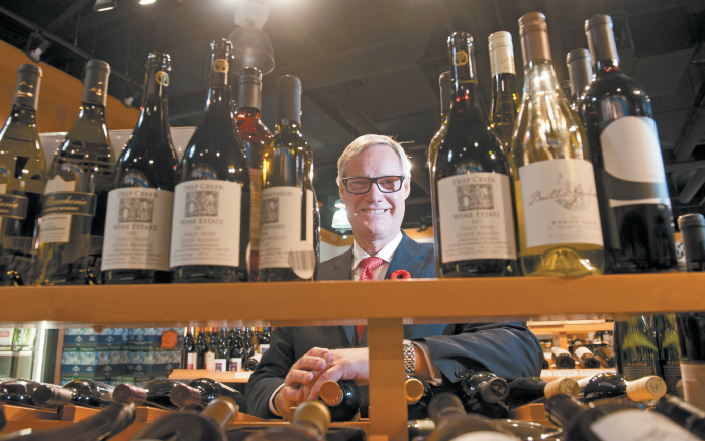 (Image: Rising Tide Consultants principal Bert Hick is concerned about the impact of wine sales in grocery stores on the B.C. wine industry)

Church and State Wines owner Kim Pullen, who is part of a coalition called the B.C. Alliance for Smart Liquor Retail Choices, told BIV that he fears that allowing wine sales in grocery stores will be bad for small and medium-sized B.C. wineries because the grocers will want to carry larger-volume, more affordable wines for reliable sales.

“Small and independent grocery stores are frozen out, they can’t compete,” Hick said.

Then there’s the April 29 letter to Premier Christy Clark signed by representatives to Canada from the European Union and six countries: the U.S., Argentina, Australia, Chile, Mexico and New Zealand.

“B.C. implemented new wine-sale regulations that only allow sales of B.C. wine on grocery store shelves,” the signatories say in the letter.

“In that the regulations appear on their face to accord less favourable treatment to imported wine than they do to B.C. wine, we question whether they are consistent with Canada’s commitments as a member of the World Trade Organization – specifically the national treatment obligations.” •