By Glen Korstrom | August 15, 2016, 7:00am
Cadillac Fairview wants to build a 25,614-square-foot, three-storey addition to Pacific Centre at the northeast corner of Howe and West Georgia streets | Chung Chow

Cadillac Fairview’s controversial proposal to redevelop Pacific Centre and remove a public plaza has drawn criticism and sparked concern that too many public spaces in downtown Vancouver are being removed.

The mall owner wants to build a 25,614-square-foot, three-storey addition to its shopping centre, at the northeast corner of Howe and West Georgia streets. The city’s urban design panel supported the move in a 7-1 vote on July 27, and the project now needs only city staff’s final approval.

City council does not need to vote to approve the redevelopment because a past council rezoned the site to accommodate extra density in late 2006.

Back then, the city wanted the Vancouver City Centre Canada Line station on its current site: the southwest corner of Granville and West Georgia streets on what was Cadillac Fairview property.

In exchange for that encroachment, the city agreed to give Cadillac Fairview extra density.

Months later, Cadillac Fairview embarked on a redevelopment plan for the northeast corner of Howe and West Georgia streets but withdrew its redevelopment application in November 2008, when the global economy was in turmoil.

Now former chief city planners and others in the development industry, such as consultant Michael Geller, oppose the way Cadillac Fairview plans to use that extra density.

“For some time, I’ve had a concern that, as we densify our downtown, instead of adding new public spaces, we’re losing them,” said Toderian UrbanWorks principal Brent Toderian, who was director of city planning between 2006 and 2012.

“A few such proposals came in when I was chief planner, and I didn’t support them.” 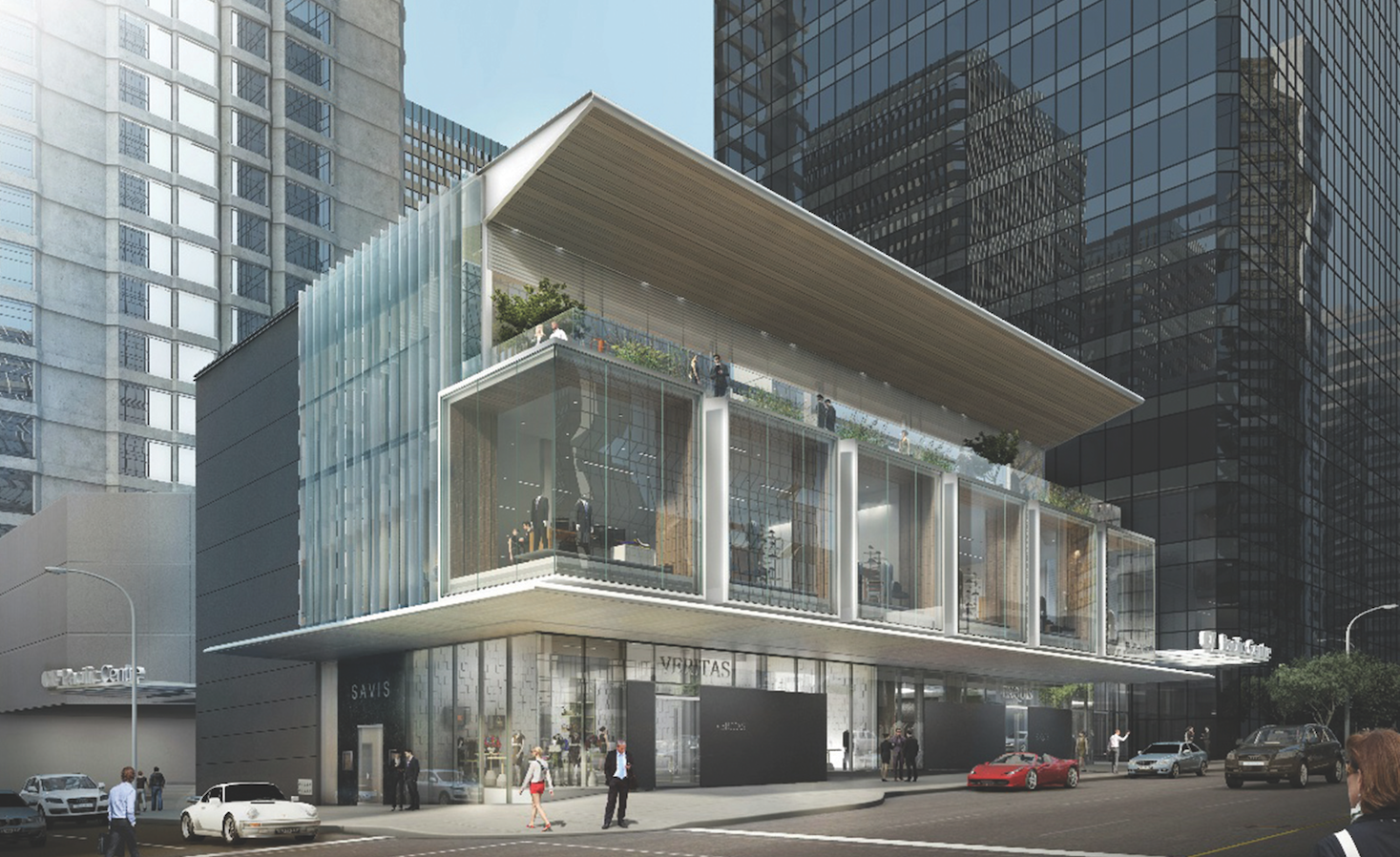 Other public plazas that are owned by developers and have either recently been redeveloped or are in the development process include:

•a dome that is part of the PwC building at 601 West Hastings Street, which could see construction within the next two months;

•the plaza and fountain adjacent to the green-glass building at 1500 West Hastings Street, which is in an early stage of redevelopment planning; and,

•a plaza on Alberni Street mid-block between Burrard and Thurlow streets, where Kingswood Properties is now constructing a retail building.

“Plazas add delight,” said Geller. “They give you a place to just relax. They provide a bit of a respite for people to sit down in the downtown and, if nothing else, to have their lunch.” 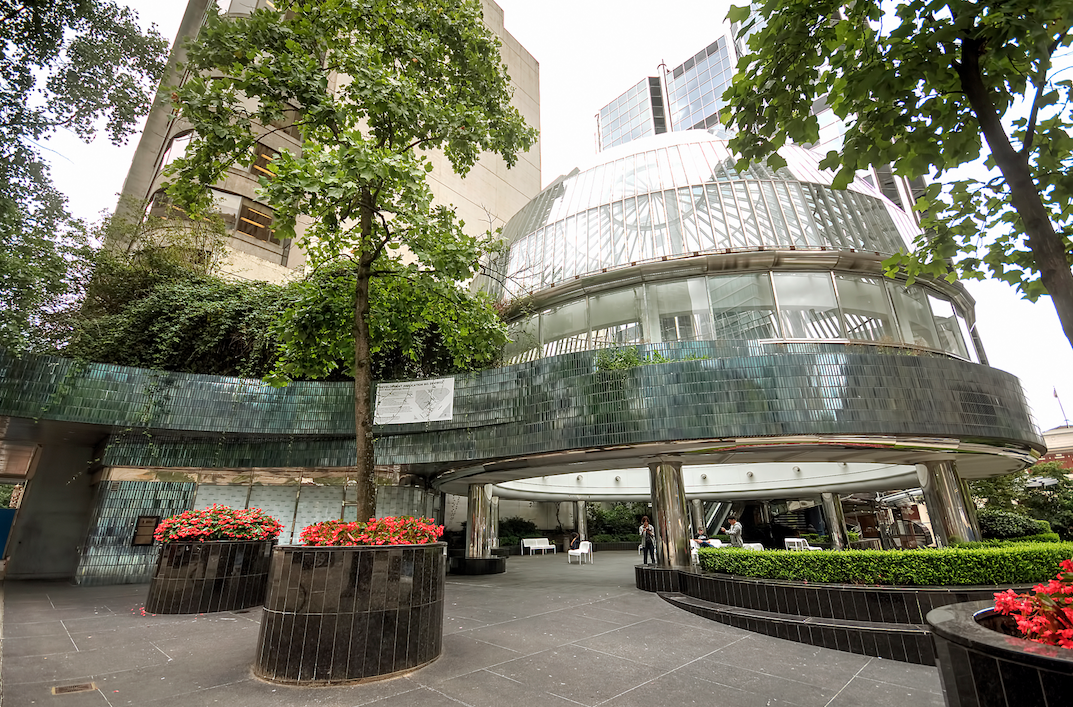 (Image: Morguard plans to replace this plaza with a new building that has a smaller public area | Chung Chow)

In addition to wanting to keep existing plazas, Geller objects to the proposed Pacific Centre redevelopment because it changes the street’s character.

“West Georgia Street is our one ceremonial street,” he said. “It’s the University Avenue of Vancouver, and it deserves more than just a continuous row of shops and offices.”

Ray Spaxman, who was Vancouver’s chief planner in the 1980s, agreed. He said the design of the building is better suited for Robson or another street that is primarily retail.

Spaxman called the design’s frontage to West Georgia Street “terrible” and the plan itself to be “retrograde” in terms of taking away public space.

Nonetheless, Cadillac Fairview spokeswoman Janine Ramparas told Business in Vancouver in an email that the company is “pleased” with the urban design panel support and that “we will now pursue a development permit.”

The proposal has some supporters.

Retail analyst and Retail Insider Media owner Craig Patterson likes the design. He called the plaza “an underutilized piece of real estate on one of the most prominent corners of the city.”

The public has until August 28 to give feedback to the city and if the city gets inundated with responses, it may hold an open house, said Anita Molaro, the city’s assistant director of urban design.

While many plazas in downtown Vancouver are endangered, others are springing up.

She pointed to new plaza space:

•south of Davie Street on Bute Street at what is known as Jim Deva Plaza; and

•in the 800 block of Robson Street, between Howe and Hornby streets. 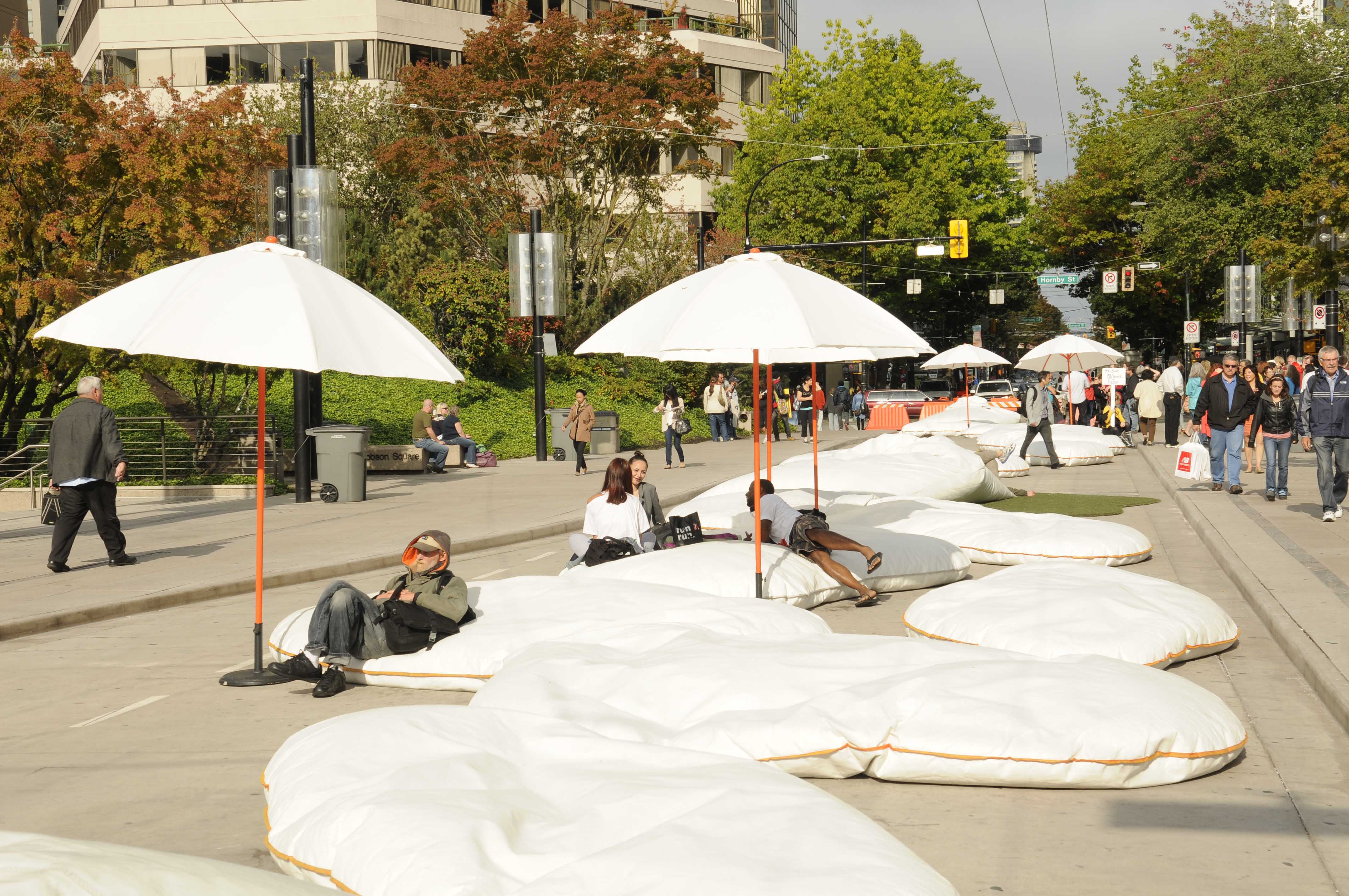 (Image: For the past few summers, the 800 block of Robson Street has had various arrangements to encourage people to linger in the street. The site is slated to become permanently closed | BIV archives)

Vancouver city council voted in April to permanently close that one-block stretch of Robson Street to traffic. The block has, for several years, been closed to traffic during the summer while different installations enabled people to linger in the middle of the street.

This winter, instead of reopening the block to traffic, the city plans to conduct public consultation to help it decide how to redevelop the space and integrate it into Robson Square. 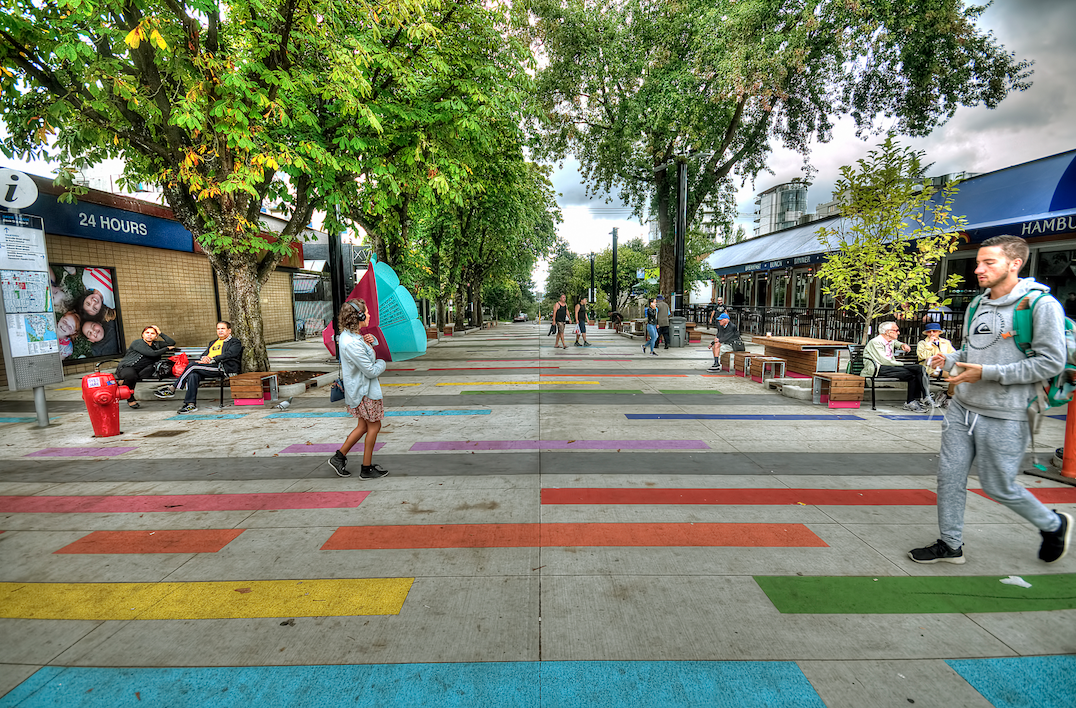 (Image: The City of Vancouver this summer remade and expanded a longtime plaza on Bute Street south of Davie Street that was recently christened Jim Deva Plaza, in recognition of the late gay activist and owner of Little Sisters bookstore | Chung Chow)

She defended the city approving developers’ requests to redevelop public plazas on their lands.

Morguard, for example, plans to build a 25-storey, 227,700-square-foot office building at 601 West Hastings Street and remove a decades-old dome at the PwC building – a space that Molaro said was not well used.

“The public space had a fairly limited area that had access to daylight, and it was really only performing as a covered open space for smokers.”

Morguard’s new tower will have a smaller public plaza where the current dome is, said B+H Architects’ managing principal for Vancouver, Bruce Knapp, who expects construction to begin this fall.

Molaro said the Kingswood site on Alberni Street between Burrard and Thurlow streets would have been redeveloped regardless because the cherry tree that formerly graced the plaza was at the end of its life and there were “membrane problems” related to a lower-level parking garage.

Molaro said the Kingswood Properties and Bosa Properties’ proposed redevelopment of 1500 West Georgia Street with a 43-storey Jenga-styled tower “hasn’t been approved yet – it’s in the early stages.”