By Glen Korstrom | October 17, 2016, 8:08am
Clearly CEO Roy Hessel peers through an opening at his company's Vancouver manufacturing factility in the Broadway Tech Centre | Rob Kruyt

Vancouver-based Clearly is focused on a future in which customers administer their own eye tests.

The subsidiary of French eyewear giant Essilor is investing resources and staff time to help Israel-based 6over6 develop an application that enables people to determine their eyewear prescriptions by taking a photo of their eyes with smartphones that have multiple cameras.

The public release of that app is likely at least a couple of years away, although a prototype already exists, Clearly CEO Roy Hessel told Business in Vancouver.

He said his company is also working with 6over6 to produce a separate app that enables users to determine their eyewear prescription by taking photos through their eyeglasses’ lenses. It will be released in early 2017.

“We’re investing money and have people dedicated to the project,” Hessel said.

“The app will be on iTunes, and it will be free.”

He noted that “subjective” eye tests are now available on the Internet.

Opternative’s eye exams, which can be taken on a desktop computer, replicate the experience of reading letters on a chart in an examination room. Opternative’s ophthalmologist then reviews and approves the prescription for a $40 fee.

Under changes to B.C. law enacted in 2010, B.C.-based Internet eyewear providers such as Clearly can dispense eyeglasses and contact lenses based only on customer information and do not require a hard copy of a prescription or other documentation.

Making it easier to get an eyewear prescription is a key business imperative for Clearly, but Hessel said technology will also reshape the industry in other ways.

“If we look three to four years ahead in the world of optical, I predict there will be certain dynamic lenses where the actual refraction could be self-adjusting,” he said.

Glasses frames would contain software that would shoot electrical currents through the lenses, altering how much light can get through, depending on how close the wearer is to an object. That, he said, could replace progressive lenses.

Other Vancouver-based e-commerce companies are similarly experimenting with new technology.

The customer – perhaps, in some cases, surreptitiously – could take a photo of someone’s shoes. The customer could then upload that photo to a Shoes.com search box and find the same or a similar pair of shoes.

Shoes.com chief revenue officer Sean Clark told BIV earlier this year that the partnership with Slyce has been successful.

Indochino CEO Drew Green, meanwhile, told BIV that his company has built proprietary software to operate as part of the online suit-seller’s website’s back end. That technology helps red-flag orders by spotting statistical outliers in a customer’s submitted measurements. 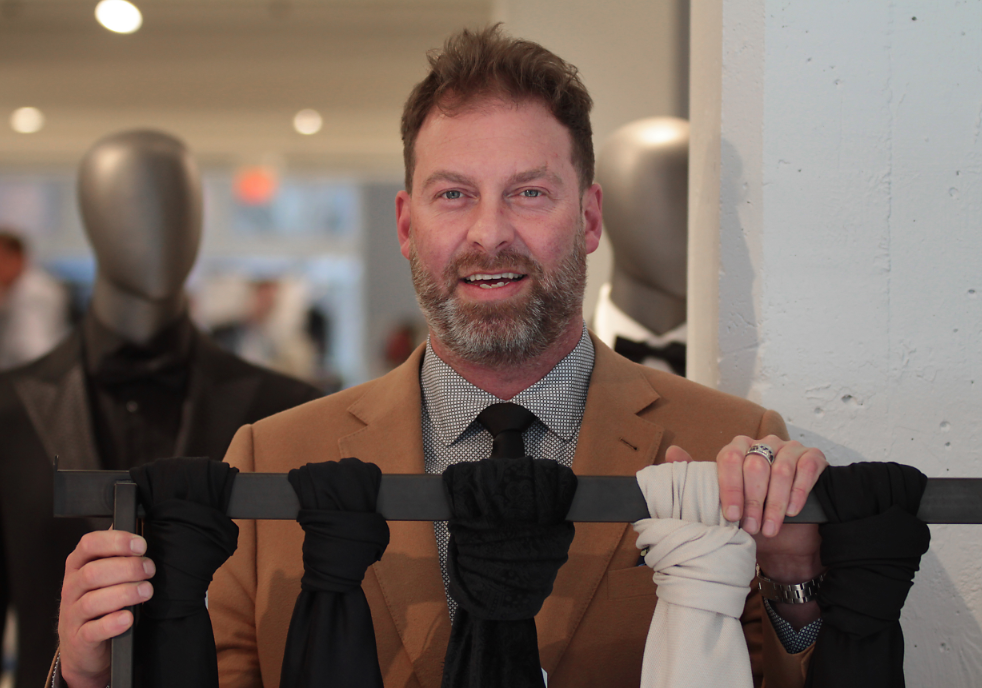 (Image: Indochino CEO Drew Green invests in proprietary technology that operates in the back end of his company's e-commerce website | Rob Kruyt)

“It auto-generates a requirement for somebody to measure again or confirm a measurement or customization,” Green said before stressing how expensive it can be when customers return products or need them altered.

Click to read profiles of Roy Hessel and of Drew Green.