Genus Capital has $1.1 billion in assets under management and is known for its socially responsible investing strategy

By Glen Korstrom | October 7, 2016, 11:05am
Genus Capital CEO Wayne Wachell does not invest in guns or tobacco and he is fast divesting from fossil fuel companies | Chung Chow

Signs that Wayne Wachell is settling into a new corner office are in evidence at the ACL Building at 980 Howe Street.

Weeks after the move, the CEO and chief investment officer at Genus Capital has yet to set up a bookcase, so a metre-and-a-half-high stack of books about investing rests against a wall.

His motive for wanting to move his company to the new office building was largely to inhabit a Leadership in Energy and Environmental Design Gold-certified space and be true to his investment-management firm’s environmental values.

A byproduct of moving to a new 4,500-square-foot site on the building’s eighth floor was that the firm could shed about 2,500 square feet of what Wachell called “wasted” space at the former office in a decades-old building at 900 West Hastings.

Genus’ 22 employees now work much closer together. Indeed, many are elbow to elbow as they gaze into computer screens and tap on keyboards to build data models that screen public companies to identify those likely to outperform.

Companies in some sectors are excluded outright. Genus does not own firearms manufacturers or tobacco companies and is fast divesting itself of fossil fuel producers.

About 80% of Genus’ $1.1 billion in assets under management are in conventional equities and bonds while the remaining 20% is earmarked for clients who prefer socially responsible investing (SRI).

A few years ago SRI investments were a mere 7% of the company’s assets under management.

“SRI investing is the fastest-growing part of our business,” Wachell said, swivelling in his desk chair away from the several computer screens on his desk.

“We’ve been doing socially responsible investing for 25 years – back when there wasn’t very much going on. It was a slow-growth market and nobody cared. That all changed about six years ago, when some of our bigger clients, environmentally active clients, came to us and said, ‘We want you to divest from the oilsands.’” 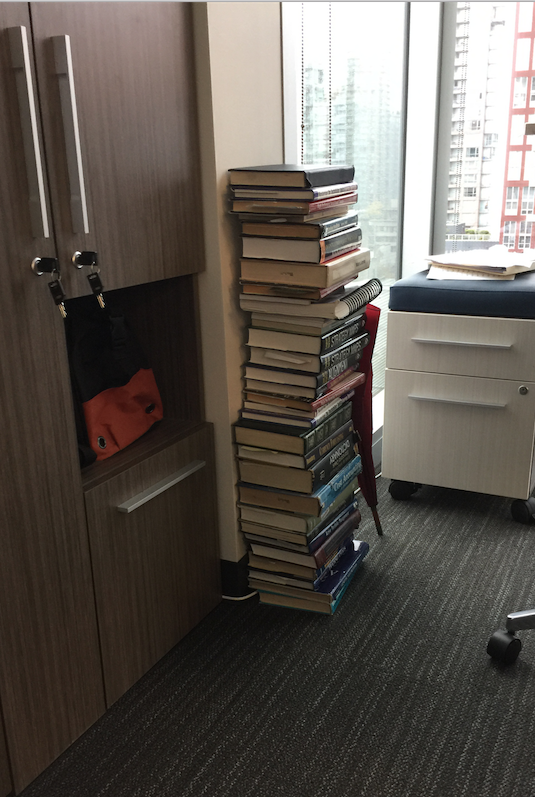 (Image: A stack of books rests against a wall in Wayne Wachell's new office | Glen Korstrom)

Genus manages tens of millions of dollars’ worth of investments for the environmental non-profit David Suzuki Foundation, which is one of the clients that wants no exposure to oil and gas companies because of its conviction that these companies contribute to climate change.

Genus’ Fossil Free Canglobe Equity fund was up 62% in Canadian dollars, before fees, between May 31, 2013, and July 31, 2016, thanks in part to sidestepping the plunge in prices for oil company stocks since mid-2014.

Increasingly, Genus is avoiding investments in equities that have low environmental, social and governance (ESG) scores even in the 80% of its assets that are intended to mirror conventional portfolios and not SRI ones.

“ESG scores are part of a stock’s fundamentals,” Wachell said. “These companies are at a higher risk. You might get your return but you might get bit as well.”

He pointed to Bank of England Governor Mark Carney’s comments in July that governments around the world are serious about implementing various schemes aimed at lowering carbon emissions and that those actions will affect private companies.

Friends say Wachell has a “laser focus on markets” in that he constantly checks his phone for stock performance and news.

What’s curious about Wachell, said John Greiner, a former client and a regular tennis partner, is that despite Wachell’s compulsion to watch for relevant headlines that could affect a stock’s performance, his thinking is geared toward the long term.

“Normally you think of guys that are tied up with day-to-day trading as being people who don’t look at the bigger picture,” he said. “Wayne has a wonderful way of looking for and finding trends.”

Wachell was not always entranced by equity markets.

When he graduated from the University of Alberta (U of A) with a computer science degree in 1976, he had dreams of being in the computer business. It was a year after Bill Gates and Paul Allen had founded the under-the-radar Microsoft Corp.

Wachell’s fate was different from those future billionaires, however.

He chose to work at Alberta’s provincial phone company, which would later morph into Telus Corp. 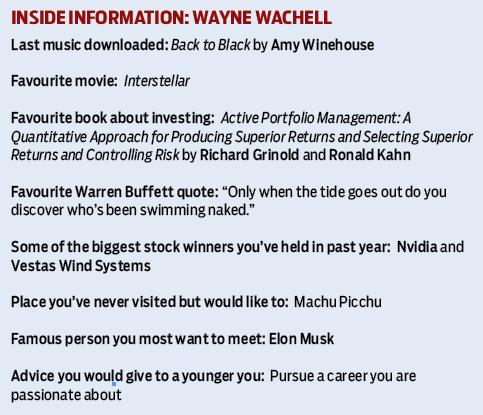 Wachell struggled with the company’s computer codes – complex algorithms that were written in the 1960s by people who, he suspected, were accountants and not computer science grads. The unwieldy code made it frustrating to execute his work of sorting out where calls originated and where they were going.

Exasperation with what he called “spaghetti code” convinced Wachell that he needed to move on and acquire a master’s degree in business administration at the U of A.

As soon as he cracked a book about modern portfolio theory, he caught the bug of financial investing and knew he had found something he wanted to do for his entire career.

After spending a few years at the Alberta Treasury Board as a junior analyst and completing a four-year second stint at Telus – this time managing bonds in the telecom’s pension fund – he applied for a job in Vancouver.

The late Milton Wong was one of the country’s most prolific money managers, and Wachell wanted to learn as much as he could from the financier and venture capitalist at M.K. Wong and Associates.

“He was a bright guy,” Wachell said. “I learned a lot about the capital markets from him.”

Other significant interactions at that firm were between Wachell, Leslie Cliff and John Dustan.

The three got along well and each shared a dream to head out on their own to found their own investment management company.

In 1989, they summoned the nerve to live that dream and they founded what is now Genus Capital in a cubbyhole office at Bentall One.

They had barely $7 million under management but that increased to $25 million within six months thanks to new customers – some of them obtained through the purchase of another manager’s book of clients – and strong returns.

“This job is very demanding,” said Wachell, who pins his weekly workload at about 55 to 60 hours. “I don’t play golf. I don’t have time.”

He finds time to play tennis a few mornings each week and he volunteers his time to sit on the board of the Bill Reid Foundation.

He is also a mentor at the University of British Columbia’s Portfolio Management Foundation.

Travelling with wife Raeanne is another passion but even when they are away on vacation, he is sometimes preoccupied with stock markets.

“When I have positions on and money out there, I’m watching the markets and making phone calls,” he said. “You never get to rest in this business unless you’re deep in the jungle and in a different time zone.” •