By Evan Duggan | November 29, 2016, 9:01am
Matters of concern: In an online survey of a representative sample of British Columbian adults, commissioned by Business in Vancouver and carried out by Insights West, roughly three in 10 respondents think housing, poverty and homelessness is collectively the most pressing concern in the province – ahead of health care and the economy and jobs | All data: Insights West

The biggest concerns for British Columbians heading into the next provincial election are housing, poverty and homelessness, according to a new exclusive poll conducted this month by Insights West for Business in Vancouver.

For 29% of respondents, housing, homelessness and poverty in B.C. concerned them more than health care, which 18% of respondents said was their biggest worry, and the economy and jobs, at 17%.

Almost half of British Columbians, or 46%, believe that the provincial government has done a good job dealing with the economy and jobs, that’s up seven points since May. Two in five are satisfied with how Christy Clark’s government is handling crime and public safety.

“There is an increase in the number of British Columbians who believe the government is handling the economy and jobs well,” said Mario Canseco, Insights West vice-president of public affairs. “It used to be 39%, and now it’s at 46%, so they gained seven points in six months.”

He said the notion among voters that the Liberals have been stable stewards of the economy appears to have solidified six months out from the May election.

“It’s a good story for them,” he said in an interview. “B.C. is doing better [economically] than many other provinces and voters are noticing.” 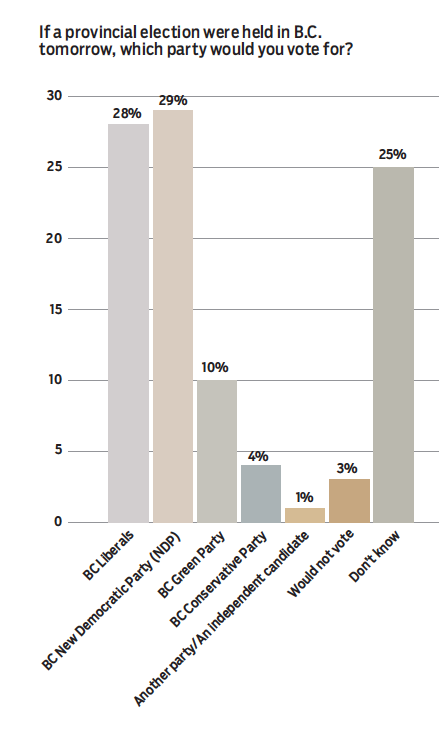 In May 2016, 22% of British Columbians said housing was the biggest issue facing the province, and now it’s 29%, he said.

He said the government’s introduction of the 15% tax on foreign property buyers in August, and its willingness to allow Vancouver to tax empty homes, seems to be paying political dividends.

“The economy in B.C. by Canadian standards has been performing reasonably well, especially in the Lower Mainland,” said Jock Finlayson, executive vice-president and chief policy officer of the Business Council of British Columbia

The relatively stable economy has allowed other issues to rise to the forefront, Finlayson said, after reviewing sections of the poll results.

“The public here isn’t necessarily focused on what I would say are frontline economic issues of jobs and overall growth,” he said. “That’s obviously the strongest card that the government has to play in coming election cycle.”

He said the government will likely try to earn another term by focusing on jobs and its support for the resource economy.

“B.C. has been leading the country in job growth for a couple of years – 3% year-over-year increase in employment, in the latest data,” he said. “In the Greater Vancouver area it’s actually closer to 5%.”

He said the last election included a lot of LNG boosting by the Liberals. “I suspect we’ll see less of that in 2017.”

Finlayson said the NDP will have to focus on social policies to make inroads. “I think it will be around housing affordability, around the incidence of low income and poverty, and concerns also around the cost of living.” 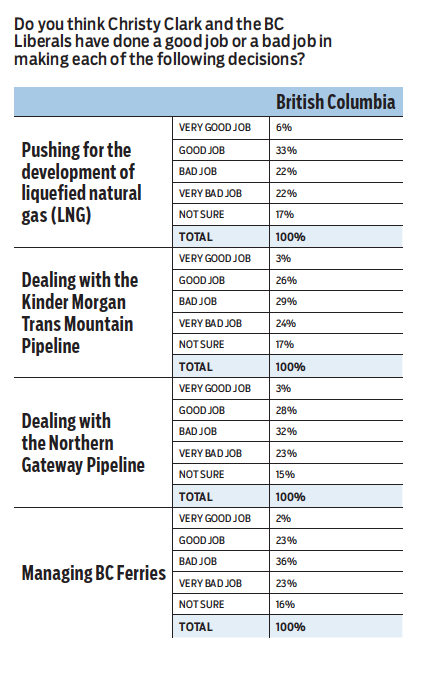 About a third of respondents said they were content with the government’s handling of the environment, while the government earned the lowest ranking on accountability, at 22%.

Reforming alcohol sales (45%), pushing for LNG development (39%) and the province’s handling of First Nations relations (37%) were among the most supported government initiatives.

Just one in five British Columbians said they are satisfied with how the provincial government is managing TransLink and in dealing with questions related to political fundraising.

The data was weighted according to Canadian census figures for age, gender and region and has a margin for error of plus or minus 3.5 percentage points. • 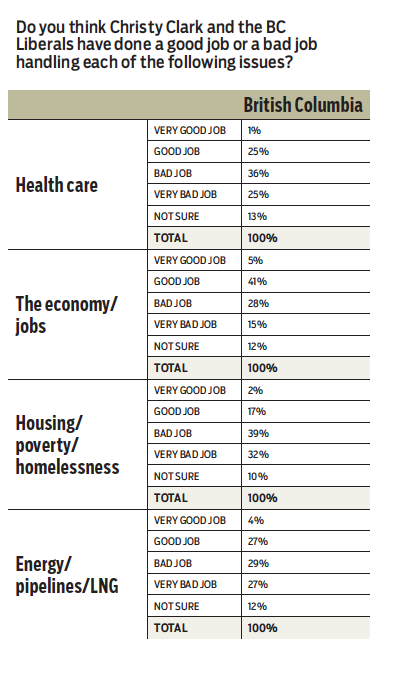