The company’s board had promoted him from vice-president of operations, and McAnerney was visiting Vancouver on the weekend of the opening ceremonies.

At the time, McAnerney was heading what was largely a juice and fruit-snack company.

It was not Pattison’s idea to shift the company into being a diversified food and beverage venture, but the self-made billionaire has supported McAnerney’s business plans with capital infusions for equipment, upgrades and acquisitions.

“The amazing thing about Jimmy Pattison is that he lets management run the companies,” McAnerney told Business in Vancouver.  “He is very hands off. He stays close to the business to understand it. Ultimately, the key decisions that Jimmy makes are who the president of the company is and whether or not capital is invested in their business plans.”

SunRype is still best known for apple juice in iconic blue packaging surrounding a logo of a sunrise, as well as for its Fruit to Go-branded fruit strips. However, new products introduced in the past three years now account for 19% of sales.

SunRype’s own research and development team concocted recipes for various iced teas that are bottled and sold under the SunRype brand.

The company also has a range of other new products: fruit and chia nutrition bars, energy bars and flavoured water, thanks to a contract to distribute Washington state-based Sparkling Ice’s calorie-free flavoured waters in Canada.

“We have a very exciting and robust pipeline,” McAnerney said. “There are new products that we expect to launch next year.”

Product diversification has helped increase SunRype’s size, as have acquisitions and equipment upgrades.

One of McAnerney’s first realizations after he took the corporate reins was the company lacked a sufficient supply of fresh apples to make its 100% pure, not-from-concentrate apple juice.

His solution was for SunRype to buy companies that had prime apple acreage in Washington state, the largest apple-producing state in the U.S.

SunRype bought Yakima Juice in late 2010 and Naumes Concentrates in mid-2011 – both for an undisclosed amount.

Upgrades, such as the $8 million capital investment in 2014 to enable the company’s Kelowna facility to fill gable-top cartons with juice, have also helped the company increase production and sales.

SunRype does not reveal financials but McAnerney told BIV sales have increased since the company went private in 2013.

In SunRype’s last full year as a public company, the company generated a $27.3 million profit on $152.8 million in sales.

Key to stable operations has also been forging a stable working relationship with the Teamsters union, which represents about 200 workers in Kelowna. The company’s 250 other workers are salaried, with about 100 based in Kelowna, 130 in the U.S. and 20 in Toronto.

Before McAnerney became CEO, SunRype had endured labour disruptions, including a strike in 2008. A sign of how things have changed: McAnerney is already involved in talks with the union for an eight-year collective agreement that would start after the current contract expires in 2018.

Those who have known McAnerney through the years think that his ability to connect with people, including union leaders, has been a source of his success.

Brad Hagan, vice-president at Labatt Breweries of Canada, remembers being in meetings with McAnerney in the late 1980s that included management and union representatives.

“Dave has this sense of humour that can just completely catch you off guard,” Hagan said.

“He delivers it at the right moment and it diffuses the situation and allows everyone to move on from an impasse. He just relates to people and is not aloof. People get the sense that he’s just like us and yet he has these leadership skills.”

McAnerney’s 18-year career at Labatt, which culminated in being director of operations, started after he graduated from the University of Waterloo with a bachelor’s degree in chemical engineering.

The Metro Toronto native had lived in Ontario all his life when Labatt hired him and moved him to Winnipeg for a year as part of management training. 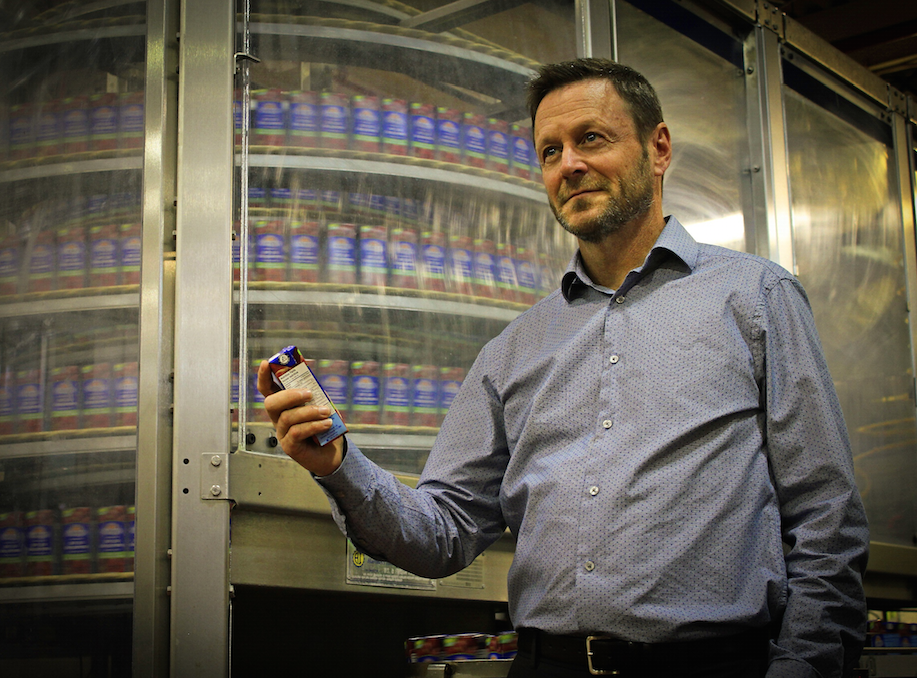 That was the start of a series of moves as he learned the different sides of the brewing business.

He met his wife, Anne, during his time in Vancouver, and they have two daughters, aged 17 and 19.

“It’s funny to think that one of my daughters, by the time she was five years old, she had lived in four provinces,” McAnerney said.

“The important thing was to stop the merry-go-round before they got to high school or too attached to their friends.”

The pivotal move to Kelowna to join SunRype as vice-president of operations in 2005 was one that he called most difficult.

McAnerney and his family had been living in Creston, where McAnerney managed the brewery.  He enjoyed it, and the girls were in elementary school.

McAnerney was also proud of some of the improvements he had spearheaded at the Labatt brewery in town, Columbia Brewery. He oversaw about $50 million in capital spending on the brewery for things such as a canning line, which kept the brewery viable for the long term.

The lure of going to Kelowna and working his way up in the company proved irresistible, however, and the rest is history.

“I take full advantage of what B.C. has to offer,” McAnerney said. “I’m an avid skier and mountain biker and I’ve been doing a lot more hiking with my daughters of late.”

China, after all, is a fast-growing market for SunRype, given that many SunRype products are for sale on Alibaba. •