The Vancouver Canucks
The Encore Suite’s urban contemporary design and unique features like the fireplace lounge make it a must see.

It’s three-on-three overtime and the Canucks are going toe-to-toe with one of the best teams in the league this season. Chicago Blackhawks captain Jonathan Toews’ game-winning goal was called back, and now the ’Nucks and rivalrous Hawks are trading breakaways and odd-man rushes like playing cards.

On Level 400 in the Canucks’ brand new Encore Suite, there isn’t a single person sitting. Everyone’s standing to catch some of the best hockey we’ve seen all season. The 262-seat space we’re calling home tonight, formerly known as the Centre Ice Grill, has gotten a serious makeover. So much so that Desmond Chen, a prominent Vancouver businessman who works in property management and a number of other fields, compares the space to one of North America’s finest in the sports entertainment business.

“This reminds me of the Staples Center and the Hyde Lounge,” he says, noting Los Angeles’ iconic downtown arena that hosts the Kings, Clippers and Lakers. “I think Vancouver has really caught up in terms of what’s out there.”

This is what the Canucks are competing with concerning premium sports experiences now, some of the top venues in the world. Rogers Arena is walking the walk with Encore and other initiatives, as the Canucks are one of the first NHL franchises to employ a full-time sommelier in Courtney Buryta. Trained through the prestigious Wine & Spirit Education Trust based out of London, England, Buryta is here as a testament to the Canucks’ commitment to taking its game to the next level.

“I’ve been with the Canucks for about a year and a half,” says Buryta as she gives us a tour of some of her favourite wines. “It’s my dream job. It’s just a marriage of all the awesome things in my life because I’m a huge sports fan as well.”

Buryta manages the Canucks’ $500,000 wine inventory list and helps educate all 350 premium staff members as to the right pick for every situation. With a core wine list of 125 selections and a 280 reserve-label list, which amounts to close to 11,000 total bottles, Buryta says they’ve got a strong focus on California Cabernet, Tuscan blends, local favourites, some cult classics and flagship Bordeaux. You can tell she loves her job: she calls the collection “her baby,” and every detail is agonized over, right down to the Spiegelau crystal and Riedel decanters.

“Canucks fans love their reds,” she says, listing off all the factors that come into play including temperature, time, demographic and season. “Big-name Cali Cab is successful. Think Cliff Lede, Stags’ Leap, Caymus and Silver Oak.” 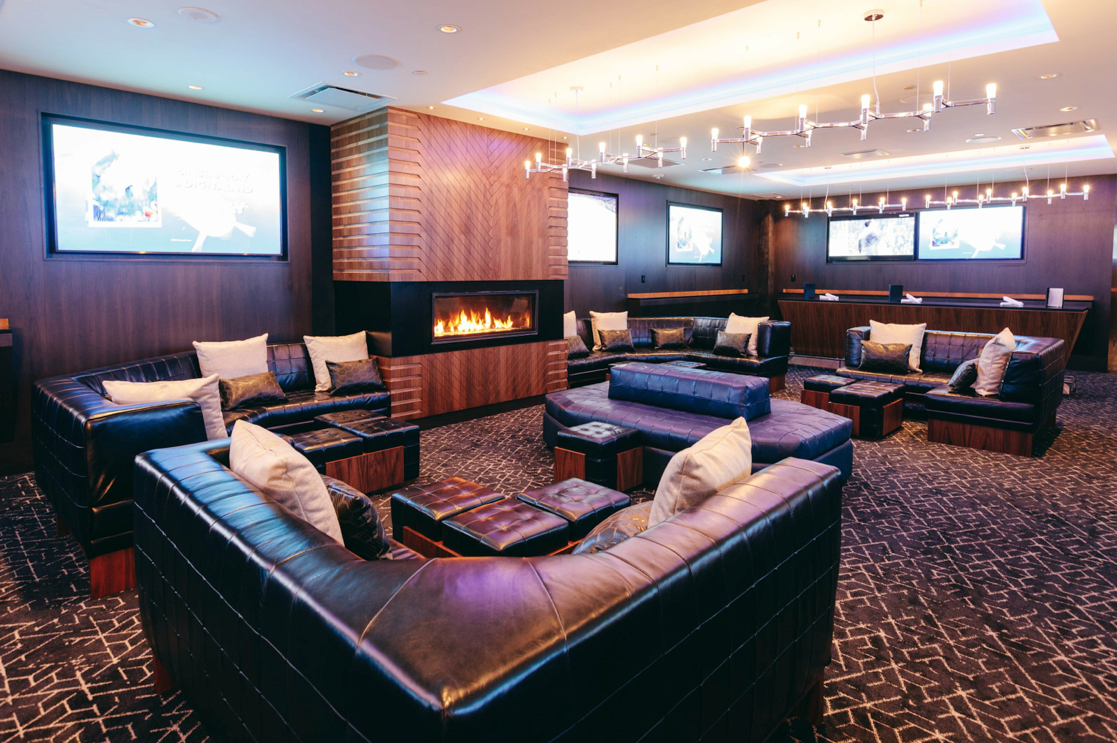 “It was very enticing with the concerts being added in as well,” says Noreen, noting members get tickets to all of the Rogers Arena offerings, which includes upcoming acts like Stevie Nicks, Ariana Grande and the Red Hot Chili Peppers. “Our boys have already been to Kanye West and Drake, and we have Amy Schumer coming up.”

The panoramic centre ice view means you miss nothing up here, and there’s ample room to move back and forth from the bar to the cozy fireplace and the buffet with ease. The plush couches offer a lounge-style feel. You don’t miss a single shot, hit or Brandon Sutter snap shot.

Scott and Darci Forbes are taking a break from their seats, lounging on couches while enjoying a beer and a glass of wine. Scott owns Iplayco, one of the world leaders in design and supply of premium-quality indoor playgrounds for children. He says he’s looking forward to enjoying games all season and also giving more tickets away to his employees.

“For us it’s kind of nice to have a night out,” he says. “We have four seats here so we’ll let staff come and enjoy it or bring clients. It works well to get a night out, and it’s more than going to see a hockey game. You really get the full experience here, the food, the drinks and a club atmosphere.”

After the game, fans hang around for the DJ’s set, a visit from Fin and Canucks legendary goalie Kirk McLean and bruising defenceman Dave Babych. It becomes a club-like atmosphere, switching to an all-out party even before the three stars of the game are announced. Taralynn Reburn, Senior Manager of Premium Sales, says this is all part of the plan. The Canucks aren’t just a hockey team and an accompanying arena anymore. They’re a destination.