Shaw Communications Inc. is paying the Mobi Vancouver Bike Share program an undisclosed amount of cash to wrap the system’s nearly 1,500 bikes with Shaw branding and plans to equip the system’s 94 current stations with free Wi-Fi for bike-share members within the next couple months, the company announced December 6.

Shaw engineers are meeting with city counterparts next week to figure out logistics of getting the Wi-Fi to the stations, Shaw executive vice-president Jim Little told Business in Vancouver.

The financing and partnership comes with the system being rebranded Mobi by Shaw Go.

Other successful bike-share programs around the world have corporate sponsors.

And Nike announced earlier this year that it would pay US$10 million over five years to put its signature swoosh and orange colour on bikes at Portland’s new bike-share program Biketown.

Vancouver’s Mobi continues to build out its network, following its launch in July, and aims to have 150 stations by the end of the year.

Stations are currently in an area bounded by the downtown peninsula, Arbutus Street, Main Street and 16th Avenue but Mayor Gregor Robertson suggested that Shaw’s sponsorship could expedite the program’s expansion eastward.

“Growing a system is important and having a crucial partner, like Shaw, is going to make it possible.”

Mobi general manager Mia Kohout would not give a timeline for eastward expansion but said that it was in her program’s future plans.

Nearer-term expansion will be into Stanley Park, she told Business in Vancouver after the press conference.

“Vancouver Park Board has approved stations in the park but we’re still going through a First Nations review so we don’t have a schedule for opening yet,” she said.

Specific Stanley Park locations for bike share hubs have yet to be determined and they are controversial among owners of bike-rental stores. 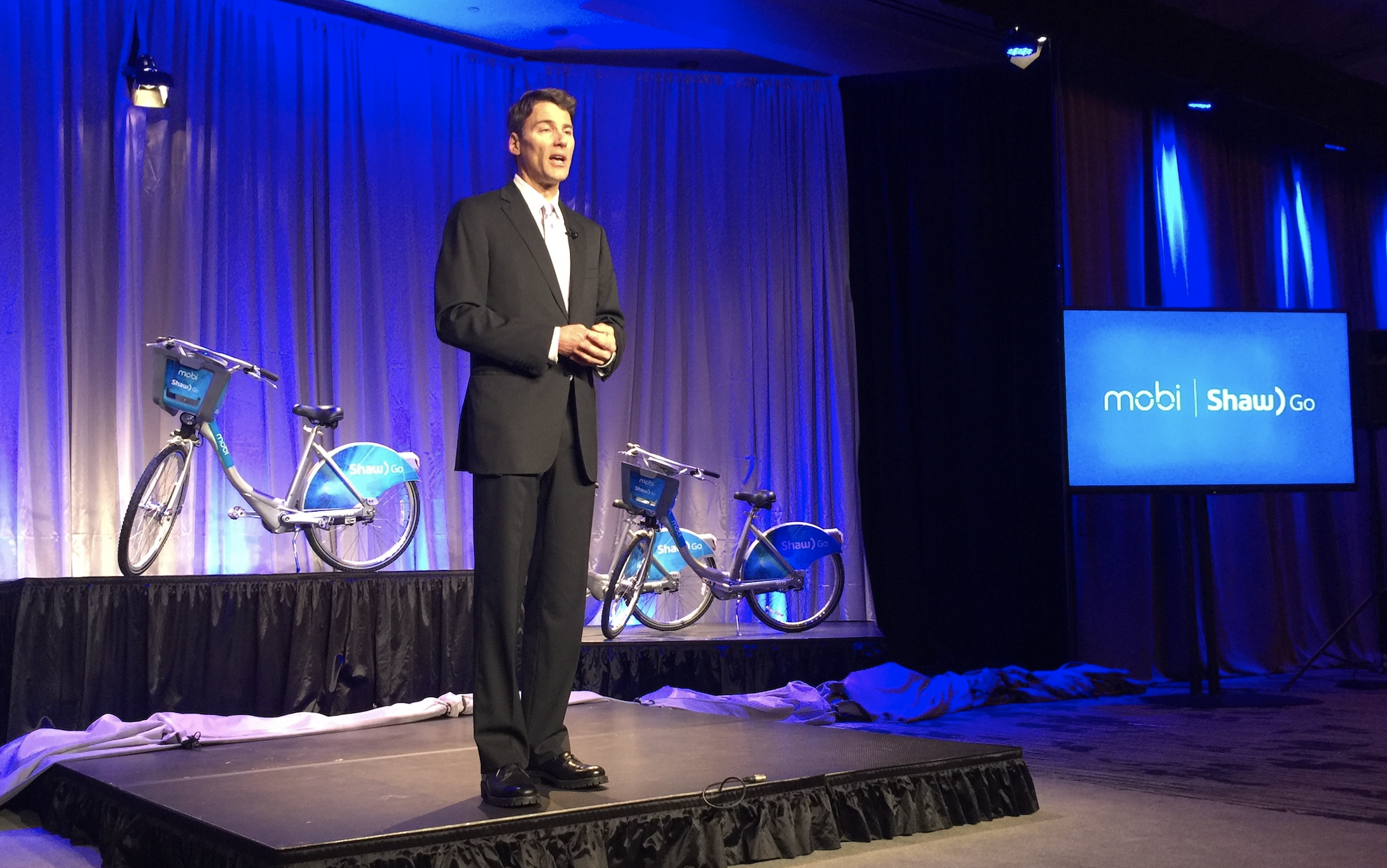 Recruitment has dwindled in the last couple months as rainy weather descended but Kohout remains optimistic that the program will exceed its initial projection of 10,000 members by the end of the first year.

The program was intended to operate at a loss for at least the first year and perhaps on an ongoing basis.

Additional costs to the city include foregone parking revenue as bike-share stations gobble up pay-parking spots.

Shaw’s partnership with Mobi is, as with the city, for an initial five-year term.

Annual memberships initially went on sale for $99 and have since jumped to $129, while monthly memberships are $15 and day passes are $7.50.

In all of those cases, the rider gets unlimited 30-minute rides and must pay overage fees if bikes are returned late. Pricier membership plans allow riders unlimited 60-minute rides.

The 24-employee Mobi may hire some additional workers to help move bikes around to balance the number of bikes at each station, Kohout told BIV.

Members who cycle to a Mobi bike-share hub and find no empty docking station for their bike are technically on the hook for overage charges but Kohout said her staff have so far been crediting members who phone to say that the reason they returned the bike late was because no dock was available.

Some bike-share programs in the world, such as in Brisbane, Australia, enable cyclists to enter their code in a machine if the bike hub has no available docking station. The cyclist then gets an additional 15 free minutes to find a different bike hub with a free dock.

“I wouldn’t say there’s no possibility of doing that,” she said. “It is not planned yet but I think longer term that would be a wonderful thing for our system.”

Brisbane residents have to pay separately for their transit pass with the city’s TransLink transit system and for their bike-share membership with CityCycle so it is not a case where all transit users get to use the bike-share program as part of their monthly pass’ fee.