With arcane concepts such as paramaterized economic models, descriptive and inferential analysis and bias sensitive propensity scores, health economics is a uniquely demanding field. It’s no wonder most industry specialists have a litany of peer-reviewed, journal-published studies to their names, and resumés bristling with abbreviations like PhD, MSc, and MEc.

Arguably the most complex iteration of this field of study, pharmacoeconomics (the economic evaluation of pharmaceuticals), undergirds a lesser-known consultancy industry called health economics and outcomes research (HEOR). The active ingredient in the growth of these sectors in Canada stems from regulatory changes in 2004 to the ways drugs were approved for sale.

“All of the provinces and the federal government got together to create the common drug review,” said Brian O’Rourke, president and CEO of the Canadian Agency for Drugs and Technologies in Health (CADTH). The review recommends which drugs to cover under federal, provincial and territorial public drug plans.

“That standardized the process for all of the provinces except Quebec,” he said. But it also added a crucial new step beyond achieving safety certification from Health Canada, which is required to legally sell pharmaceuticals in Canada. The new requirement meant that drug companies also needed to prove that their product possessed economic value for Canadians if they wanted to convince public health care funders like Medical Services Plan of B.C. to pay for them.

Wei Zhang, program head of health economics at the Centre for Health Evaluation & Outcome Sciences at St. Paul’s Hospital, said economic evaluation used to come after a drug had been delivered to patient populations. “Now cost effectiveness has become part of standard analysis,” she said.

Zhang, who works in the public sector, sees the evaluations as a critical step for delivering affordable medical services to patients.

Economic evaluations of pharmaceuticals are far more complex than typical cost-benefit analyses. The costs of creating and producing a given drug are weighed against more than its laboratory-tested medical benefits. They are measured against the cost of competing drugs with similar medicinal effects while also being valued according to their non-monetary benefits, such as how many years a patient might live either in full or compromised health as a result of taking the drug. The overarching term used to represent this evaluation is “quality-adjusted life years,” and the calculations used to compute its value are highly complex.

It’s why many in the industry are highly trained not only in medicine or biochemistry, but also in statistics, economics and disciplines such as public policy and health administration. And such a rich diversity of skills is hard to find in any one person.

“I wish the universities would pump out more of these people,” said O’Rourke, who laments that salaries offered in public systems can’t compete with those offered by private companies in the U.S. “We’re all competing for the same skill set.” 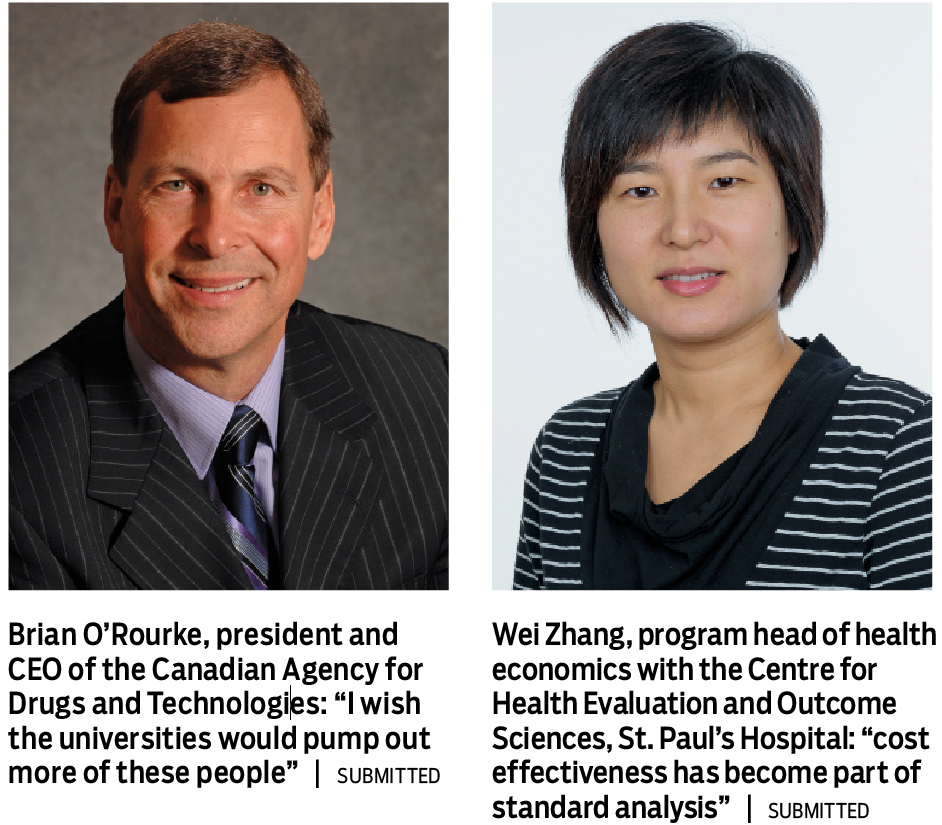 Brian Harrigan, principal and managing director at Broadstreet Health Economics and Outcomes Research and past director of administration and operations at the BC Centre For Excellence in HIV/AIDS, noted that “the health economics and outcomes research industry has grown considerably in the last two decades,” both locally and internationally.

The city’s reputation as a world leader in cancer and AIDS/HIV research may have something to do with it, but big pharma’s penchant for vacuuming up HEOR competitors may offer a better explanation. Those with the specialized knowledge and experience required to build an HEOR business have the potential to profit hugely.

In 2005 Harrigan left the public health sector for private industry. He took on the role of COO at Oxford Outcomes, which at the time was an HEOR consulting firm based in the U.K. with offices in Vancouver. In 2011, pharmaceutical research giant Icon (Nasdaq:ICLR) acquired Oxford for an estimated $55 million.

Harrigan was more recently principal and managing director at Redwood Outcomes, an HEOR company founded in 2013 by three health care academics with expertise in epidemiology, statistics, evidence synthesis and global health. In 2015 it was purchased by Precision, another large, U.S.-based but privately held pharma company.