The Sportsbar
Bringing the sports bar experience to another level, this venue offers exciting, high-enery space to get in on all the action. Attached to the restaurant are 104 Sportsbar Club seats offering an unobstructed view of the ice. Visit thesportsbar.ca/seasontickets to learn more.

Canucks’ Sportsbar is the place to be

By Patrick Blennerhassett | January 16, 2017
The Sportsbar LIVE! at Rogers Arena has 104 new in-arena seats offering a restaurant atmosphere, in-seat dining privileges, and an unobstructed view of the ice

It’s the perfect one-two punch of hockey inside Rogers Arena’s newest restaurant, The Sportsbar. Blasted across the 100-plus 4K HDTVs, the Canadian junior team is laying waste to the Swedes in the semi-final of the world championship.

Down on ice level, the Canucks are beating up on the Arizona Coyotes, adding another win to their streak and inching closer to a wild-card spot in the Western Conference.

The Sportsbar is the latest offering from the Canucks, with a full-on restaurant-bar atmosphere chock full of some of the best wings in the city and more screens than you can shake a composite stick at. But here, as the Canucks play down on ice level, the fun becomes surround sound. Fans walk in off the street, chomp on food, down beer and feel like they’re feet from the action – which is true. Open three hours prior to puck drop or during any major sporting event, The Sportsbar also offers club seats for season members where patrons can view the game live with unrestricted sightlines.

One of these seats is occupied by Matthew Breech, co-founder and chief executive officer for TallGrass, a Vancouver-based manufacturer and distributor of whole-food supplements and natural beauty products. Breech said he bought the season tickets because he gets the best of both worlds, a world-class bar atmosphere while he watches live world-class hockey.

“It’s nice, for me, to be able to go to the game and sit there and eat dinner, to be honest,” he said. “Usually you go to the game, and it’s dinnertime, 7 p.m., and you’re sitting there and kind of eating a burger and spilling your beer on your neighbour. So now it’s nice to sit and enjoy a steak and drink a bottle of wine if you’re taking a client to a game.” 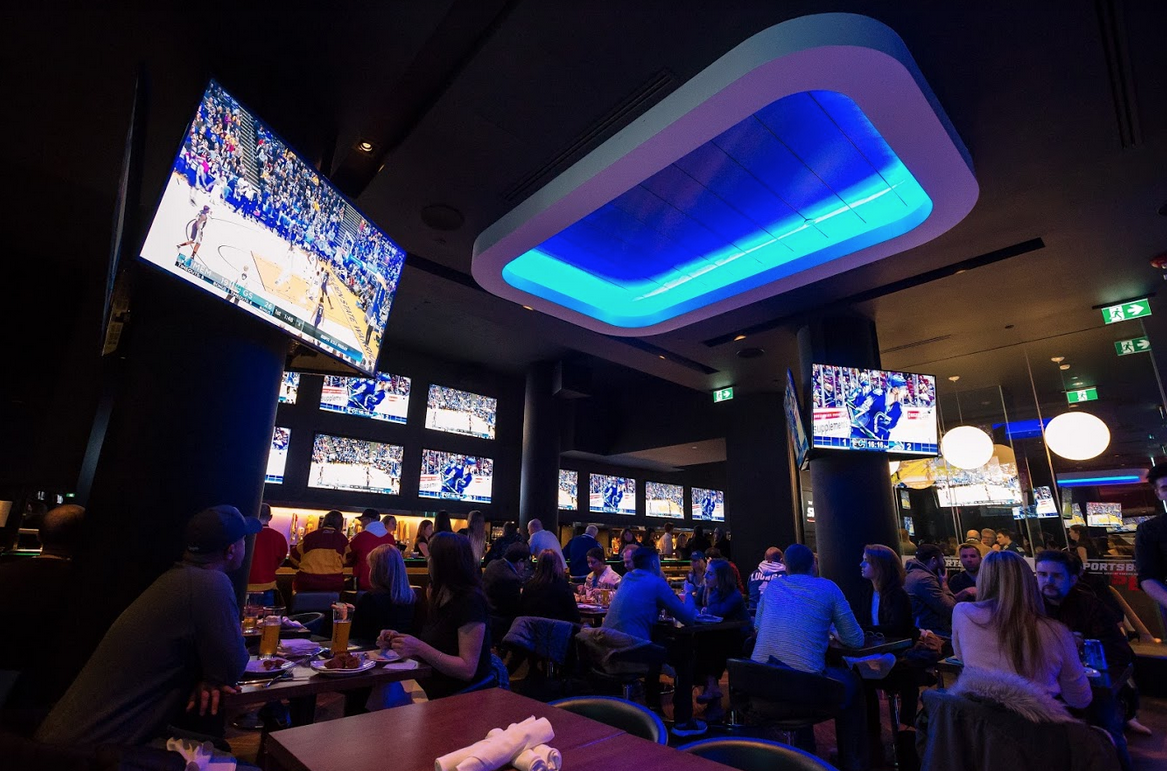 Overhead, dynamic lighting is programmed to highlight the not-to-be-missed moments during live sporting events that are also captured on the 4K HD-TV screens anchored throughout the space

Breech is one of many who have already bought into the new idea, and fans are lining up at the door. Reservations can be made for a host of games and events, from NFL playoff football to Ultimate Fighting Championship fights. Breech said he’s already taken multiple clients to his seats, a pitch-perfect way to cement a relationship.

“We like to get to know our clients on a personal level, and it’s always nice when you can do that when you’re breaking bread together,” he said. “We can go for dinner or lunch or just have a meeting together, but a hockey game is just a nice casual way to hang out.”

Inside The Sportsbar between periods, DJ Barron S spins tracks to keep the restaurant lively, and the 90-foot bar with 62 beer taps is decked out to look like a sheet of ice. The restaurant’s centrepiece is a 16+ foot projection screen, giving everyone in the place a premium vantage point. It’s here we meet Dave Whitworth, director for the Aquilini Restaurant Group. When asked for a word to describe the place, he’s got no shortage of adjectives. 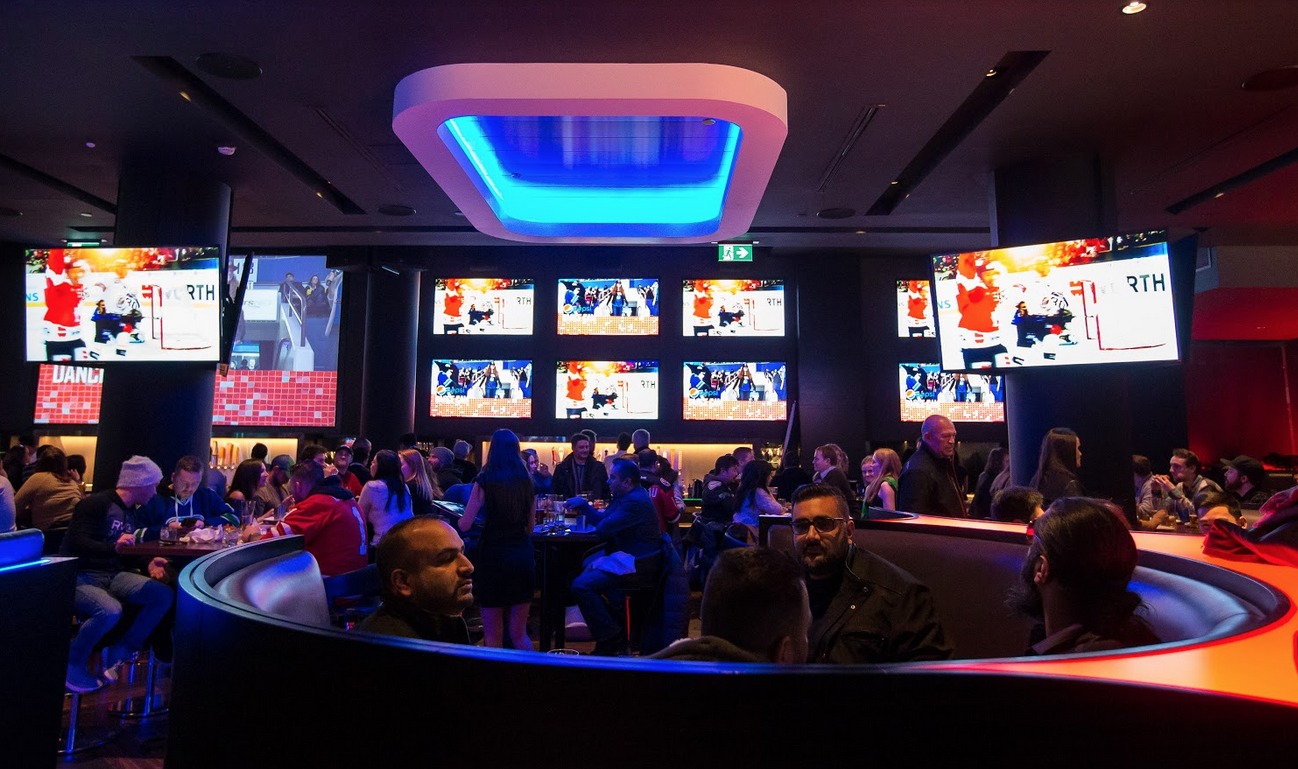 Whitworth gives us a tour, showing us some of the small touches that make The Sportsbar a one-of-a-kind offering. There’s a display of 120 hockey sticks, game-used from various NHL superstars. The walls have been constructed with lighting all around to flash red after a goal, and we get a sneak peak of the party room, a private space that can host up to 56 people and another 74 for in-arena seating.

Canucks Chief Operating Officer Jeff Stipec pops in for a quick interview, outlining how The Sportsbar fits into the team and Aquilini family’s vision when it comes to offering first-class entertainment.

“The Sportsbar is truly one of a kind in North America and no other venue in town offers fans as much atmosphere, both for live Canucks games and big events on TV,” he said. “Some diehard fans want to sit and focus on the game. So we have created an environment for those who come here purely for the game. But we also offer an unmatched option for casual fans who want to come for a night out, where hockey or the game on TV is part of their experience but it’s not the entire experience. In a very short time, The Sportsbar has already become the city’s favourite sports and entertainment venue.” 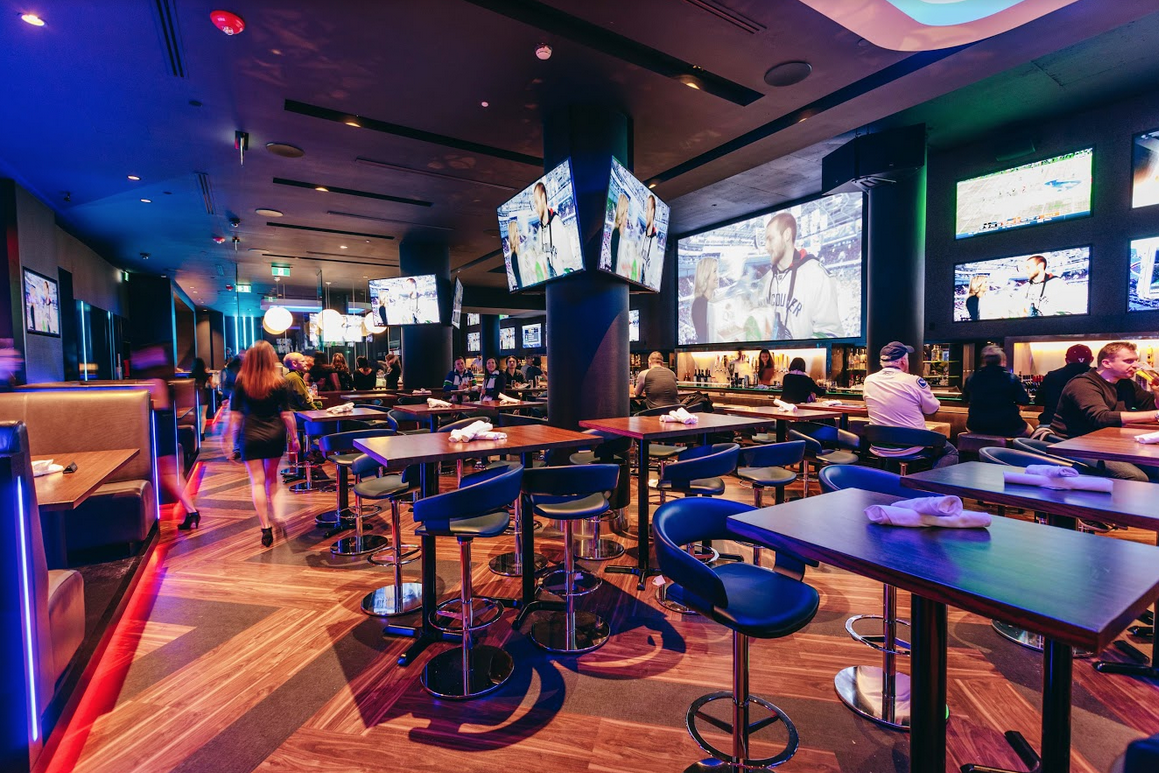 The upscale 14,000 square foot venue is the first-of-its-kind in North America to fuse an exceptional sports and dining experience with the energy and excitement of the bowl