By Glen Korstrom | January 13, 2017, 2:32pm
Cathay Pacific plans to increase its flights between Vancouver and Hong Kong to 17 per week, up from 14 | Cathay Pacific

Vancouver International Airport (YVR) is readying for one of its largest surges in non-stop flights between Vancouver and Greater China.

That’s nearly a 24% jump in about six months and a continuation of a longtime trend considering that there were only eight airlines offering 71 weekly non-stop flights between Vancouver and Greater China in January 2016. The airport is set for a 46% jump in those flights within 18 months.

Reasons for the steady rise in traffic include a growing middle class in China, a healthy interest among many Chinese in Vancouver real estate and the advent of 10-year multiple-entry visas for Canadians and Chinese citizens in March 2015.

YVR is also increasingly a gateway airport to North America for many Asians.

Hong Kong Airlines intends to be YVR’s newest carrier on June 30, when it launches daily flights between Vancouver and Hong Kong.

Two other carriers are planning to increase frequency.

Air China plans to boost its non-stop service between Vancouver and Beijing on July 25 to 11 flights per week, up from seven currently, on a seasonal basis.

Cathay Pacific, in contrast, plans to make its increased frequency permanent when it adds three flights to its current 14 weekly Hong Kong-bound flights on March 28.

“That gives us a competitive advantage as we have the most frequent flights,” he said. 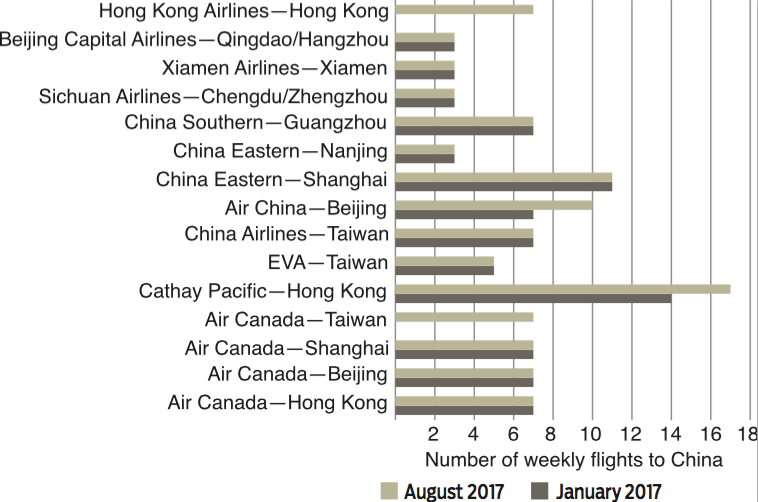 Another Cathay advantage is that the airline intends to use new Airbus A350 planes for the three additional flights out of Vancouver. Those planes are Airbus’ answer to Boeing’s (NYSE:BA) 787 Dreamliner aircraft, which features the airline industry’s best fuel efficiency and in-flight technology.

Cronin said prices are likely to fall, at least temporarily, because of the new competition from Hong Kong Airlines.

“When we come close to matching or we match their initiatives, there’s also a stimulative effect on the market with new business that might have gone to a different destination,” he said.

The increase in non-stop flights between Vancouver and China is one gauge to determine the rise in visits between the two destinations.

The rise in passenger traffic is likely much more than those numbers show, however, because Air China and other airlines are also using larger planes, said Carl Jones, the Vancouver Airport Authority’s director of air service development.

And while traffic between Greater China and Vancouver has been steadily rising, he said “mature” routes such as Vancouver-Toronto have largely been flat.

Most of those flights are also on smaller planes than the wide-body jets that airlines usually use to cross the Pacific Ocean, he added.

Jones said Hainan might consider non-stop flights between Vancouver and Tianjin, which is an hour by train from Beijing.