Housing in Vancouver is notoriously unaffordable, and for a second consecutive year, the city has ranked as the third least affordable city in a Demographia study that looked at home prices in nine countries: Canada, Australia, China (Hong Kong), Ireland, Japan, New Zealand, Singapore, the United Kingdom and the United States.

The annual ranking looks at a city’s average home prices as a multiple of the average household median income. Cities with multiples of three or less are deemed affordable, and those with multiples greater than 5.1 are labeled severely unaffordable. Vancouver’s multiple registers at 11.8.

In 2016, the city’s multiple was 10.6, which means housing in the city has become even less affordable. Vancouver has been in the top three for at least five consecutive years and has been the least affordable Canadian city for as long as Demographia has been releasing this report.

“Vancouver had already developed a severely unaffordable housing market in the first survey [in 2004], which has been associated with its urban containment policy, adopted about five decades ago,” the report said.

“Vancouver has experienced the greatest housing affordability deterioration among major markets in the Demographia annual International Housing Affordability Survey, with its median multiple more than doubling, from 5.4 to 11.8.”

Demographia pointed out that the rapid escalation in Vancouver house prices has stalled since August after the British Columbia government put in place a 15% foreign buyers tax.

“The most demanded market segment, detached houses, dropped 17% in average value in the first month, but recovered two-thirds of the loss in the following four months,” the report said. “Overall, the Real Estate Board of Greater Vancouver benchmark price has dropped about three percent since July.

Victoria had the second least affordable housing in Canada, at 8.1. In that city, the median home price was found to be $542,400, and the median household income was $67,300.

Most of the most affordable cities were found in the United States, with Racine, Wisconsin in top spot at 1.8. 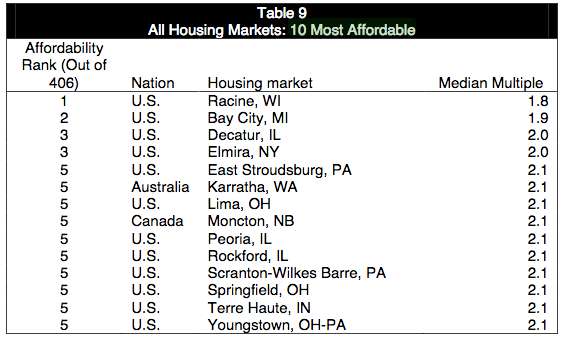