Thousands of kilometres of bike lanes, a bicycle-friendly civic government and a new bike-share system make for an easy ride

By Marke Andrews | January 3, 2017
In an unusual setup, a stretch of Vancouver's Union Street has cyclists travel between the curb and street parking | Hub Cycling

Less than two decades ago, cycling lanes were scattered in Vancouver, some running only a few blocks and all undivided from automobile traffic. Today, the city has 3,000 kilometres of bike lanes, almost all still integrated with vehicle traffic, but most clearly marked and a few with physical dividers.

According to statistics provided by the City of Vancouver, 10 per cent of Vancouverites commuted by bicycle in 2015, with residents making 131,025 trips daily. That represents a 32 per cent increase in cycling trips over the previous year.

“Vancouver is the leading cycling city in North America,” says Ellie Lambert, director of communications for HUB Cycling, a non-profit organization established in 1998 (then called Vancouver Area Cycling Coalition) to improve cycling conditions in Metro Vancouver. In tandem with a bicycle-friendly civic government, HUB Cycling has made inroads into getting better and safer bike lanes, integrating cycling with public transit and making the region’s many bridges safer for two-wheelers.

Cycling trips in the city will likely further increase in 2017 with last summer’s launch of an urban bike-share system, Mobi, run by Vancouver Bike Share Inc., a subsidiary of CycleHop. Mobi currently has bikes at 82 docking stations, mostly located in the downtown, False Creek, Mount Pleasant, Kitsilano and Arbutus Street neighbourhoods. Mobi has signed up 3,675 founding members, as well as many monthly members. By summer, Mobi plans to have 1,500 bikes at 150 stations throughout the city.

Mobi’s five-year, $5 million contract is only with the City of Vancouver. Those who live in the suburbs and commute into the city cannot access a Mobi bike until they reach the city.

Bringing a bike to the city isn’t onerous. Suburban commuters can mount bicycles on the front of buses – or carry them aboard commuter trains – operated by TransLink, the region’s transportation authority. HUB Cycling, through its suburban committees, has worked on an “Ungap the Map” strategy, making cycling more accessible outside the city limits, and making cycling (and walking) safer on the many bridges running to and from the city.

While cycling offers health and esthetic benefits, the one advantage I experience as a bicycling commuter is time. Car and transit trips can vary wildly from trip to trip, but I can plan a bike commute almost to the minute. If traffic or construction causes a major delay on a road, you can take the nearest alley to get around the problem. And with businesses and the city making bike cages and stalls more available, you don’t need to hunt for a parking place.

All is not rosy. Bike thefts in Vancouver total 2,000 annually, with Granville Island a popular hunting ground for thieves. Cyclists are encouraged to register their bikes and their serial numbers with Project 529, an online bike registry affiliated with the Vancouver Police Department and RCMP detachments in Surrey, West Vancouver and Richmond.

If you prefer riding for pleasure to commuting by bike, there are numerous scenic routes. The seawall route begins at Coal Harbour downtown and runs around Stanley Park, past English Bay and Sunset Beach, along False Creek’s north side and south side (including Granville Island) and out to Kitsilano, where you can join another cycle path that takes you around the University of British Columbia and, if you like, through Pacific Spirit Regional Park (see map). 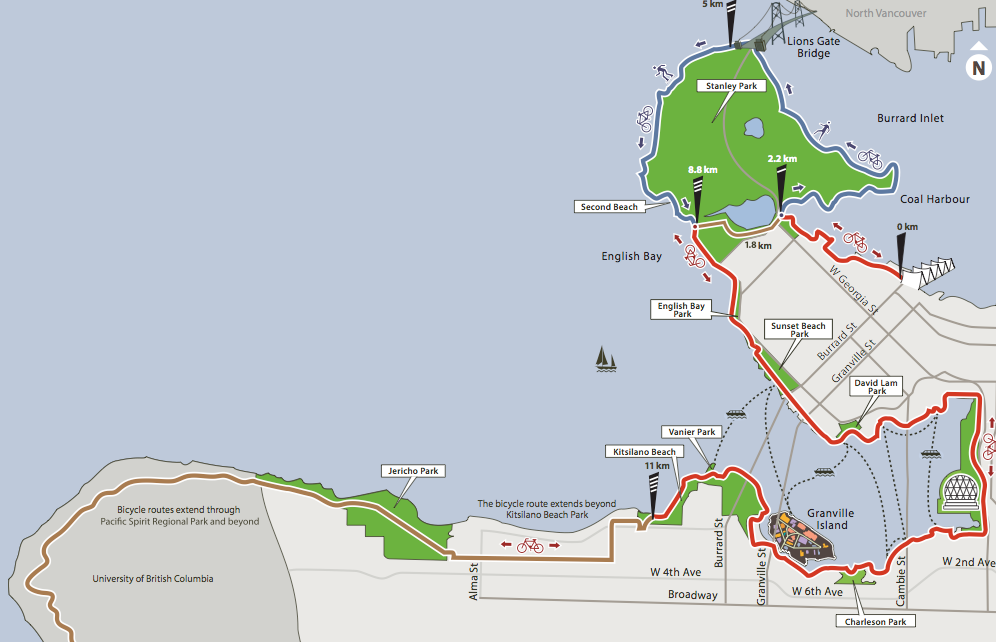 City of Vancouver. Map not to scale

Another good route is along the West Dyke and South Dyke of Richmond and Steveston, an area as flat as the Canadian Prairies for cycling.

Those looking for something more adventurous can, with the right bike, travel the region’s many mountain biking trails. Good trails run throughout the North Shore and the Fraser Valley, and if you want something farther afield, head for Whistler. The Whistler Mountain Bike Park has 65 trails of varying degrees of difficulty, encompassing 1,500 vertical metres.