New condo-sale rule brings relief to many, grief to some

By Glen Korstrom | March 14, 2017, 8:08am
Ted Broekhuizen stands on the rebuilt site of a former dilapidated Burnaby townhome development where he owned two units and spent seven years navigating the court process to sell the project | Rob Kruyt

Part 1 of a two-part series

Part 2 focuses on unintended consequences that stemmed from the government passing Bill 40. To read that story, click here.

Developers, lawyers, realtors and some condominium owners rejoiced last summer when the B.C. government changed the law to make it easier for strata corporations to sell assets.

The government’s Bill 40 lowered the bar so that if 80% of the owners in a strata corporation vote to dissolve that entity and sell the site to a developer, they can petition BC Supreme Court for final approval.

The court then takes into consideration whether owners who oppose the sale will suffer a significant hardship. Court approval is not a rubber-stamp process, but proposals are now a lot more likely to find success in court than they would have before Bill 40 became law.

Previously, courts usually required unanimity among the owners, although judges could make exceptions for cases in which a development was badly rundown.

The downside of B.C.’s new legislation, however, is that condominium owners who like where they live and have no desire to sell are in a more precarious situation when neighbours start looking to divest.

The new law raises the possibility that seniors and other owners and tenants on fixed incomes could be forced out of their homes – a prospect that is particularly daunting in the Lower Mainland given the huge run-up in the region’s real estate prices.

Nonetheless, developers are excited about the new law because it could bring a new stream of potential development sites into the market.

Condominium owners who live in older buildings that need extensive repairs are relieved that there is a new viable route to escape ongoing special assessments.

Strata lawyers and realtors, similarly, are happy with the new law because they see lucrative spinoff work for many years to come.

Relief, joy – and some anguish for those with leaky condo nightmare

Bill 40 was drafted to address the issue of condominium owners stuck in a frustratingly drawn-out and costly legal process in which a few holdout owners could thwart the will of the majority. It was a problem that exploded with B.C.’s leaky-condominium crisis in the 1990s.

Ted Broekhuizen was among the first British Columbians caught in this situation when he owned two of 216 units in Burnaby’s Glenrobin complex at 9200 Sandlewood Crescent.

Problems started in 1997, when the province’s leaky-condo crisis was in full swing. Broekhuizen bought his units in 1994, when the complex was converted from rental housing into stratified suites.

Units sold for around $100,000 each, which was low even for the mid-1990s. Owners looked forward to peacefully living on the five hectares of property where 16 buildings and a series of townhomes were perched on a sloping hill among patches of parkland, and where shopping was a mere 10-minute walk away at Lougheed Town Centre. 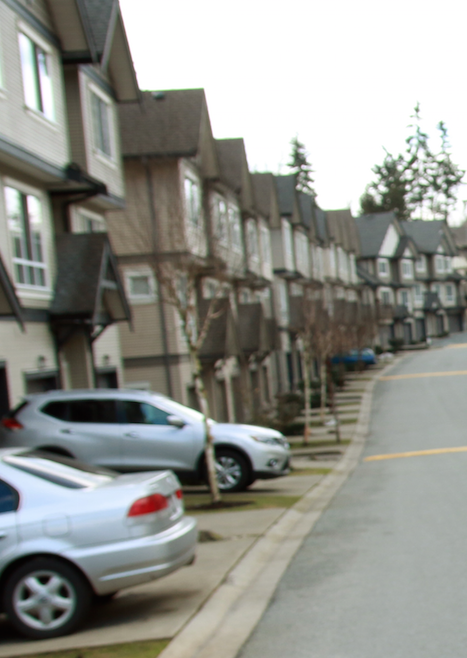 But just a few years later, many buildings were saturated with mould and decay. Some were scarcely livable.

“The trauma for people was horrendous as the units were seriously compromised,” Broekhuizen told Business in Vancouver. “Many owners said, ‘I can’t take this anymore. I have young children, and they shouldn’t be living like this.’”

When a mid-1997 engineering inspection deemed that repairs would cost as much as $9.5 million and that owners would be on the hook for $40,000 each, the drive to sell the property launched in earnest.

Owners chipped in about $5,000 each in special assessments, but it was soon clear that the complex needed much more than a touch-up.

“We went to court probably five or six times,” said Broekhuizen, who was on Glenrobin’s strata council continuously between 1994 and 2004, when Polygon Homes Ltd. bought the property for $23 million.

“We had to go through an initial court process just to get a listing agreement – to have a realtor legally be able to offer the property,” he said. “It was a very frustrating process.”

Unanimity could not be achieved because a minority of the residents had units that were in relatively good repair, and those owners did not want to move.

Broekhuizen remembers that some of those owners were “simply blind” and did not accept reports that the vast majority of buildings were not livable.

Glenrobin’s property manager, Gerry Fanaken, told BIV that feelings ran so high in the property dispute that fist fights broke out at meetings and police had to be called.

Dozens of owners walked away from their homes, leaving Canada Mortgage and Housing Corp. to take control of the empty units.

Owners rejected Polygon’s initial offer, but, in 2003, after Polygon sweetened its bid, owners voted more than 90% to sell.

The owners then went to court to seek an order declaring that the entire complex was essentially destroyed and giving the OK to dissolve the strata corporation.

“In the end, the court can do pretty much anything,” said Marcel Peerson, who was a lawyer who represented banks and other lenders that loaned money to Glenrobin mortgagees.

There are winners and losers now that Bill 40 is the law.

Winners include the condominium owners in buildings where the value of potential redevelopment of the land far exceeds that of what now sits on the site.

Then there are the realtors and lawyers who help the owners navigate the process.

At the other end of the scale are the owners who do not want to sell and who doubt that the sale will bring enough money to allow them to buy an equivalent home.

The Brandywine project at 585 Austin Avenue in Coquitlam is a microcosm of these divergent interests. 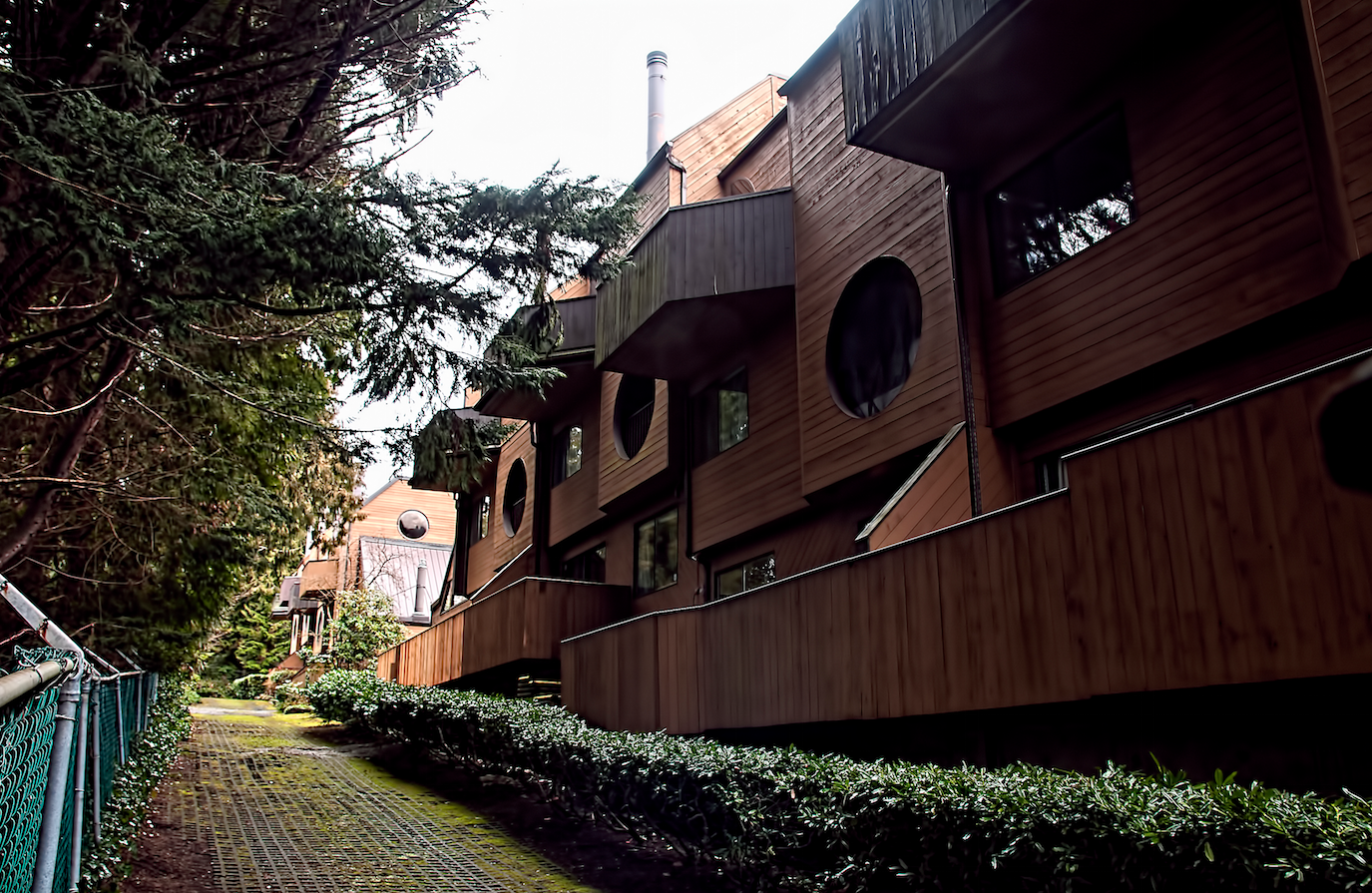 (The Brandywine development at 585 Austin Avenue is designed in a West Coast modern style that was popular in the 1970s | Photo: Chung Chow)

Patricia Depodesta, who owns one suite in the 40-year-old, wood-frame development, told BIV that her building is like many in Metro Vancouver. There is much to be repaired, and special assessments would be a severe burden on owners.

“You think that your maintenance is going to cover the repairs, but it doesn’t,” said Depodesta, who has lived in her unit for 28 years. “Ever since I’ve been in this building there have been special levies. At the beginning it was like, ‘Oh, darn.’”

More recently, however, the need for major repairs at Depodesta’s 58-unit complex has become urgent.

A 2013 depreciation report notes that Brandywine owners should expect to pay $5 million in the next 10 years for “major maintenance” including fixing water ingress issues in the parkade, deteriorated wood cladding on exterior walls and a blistered roof membrane.

Instead of accepting those costs, members of her strata corporation voted 49-9 on December 12 to sell the complex to Anthem Properties Group for $32 million. The case is now before the court.

For Depodesta, who is a senior, the successful vote was a godsend.

That, however, is not nearly enough for Daniel Nikitiuk, who owns a unit at Brandywine with his wife, Denise Quesnel.

He has priced units at nearby buildings and found that an equivalent unit would sell for between $600,000 and $700,000. More troubling for him, however, is that he doubts he will be able to find another unit nearby that is as big as the 1,366-square-foot unit he bought last year for $380,000.

“We are making a profit on the sale, but I have to spend all of the money in order to have a place to live again,” he said.

“This building also has unique architectural construction. It’s West Coast modern from the 1970s, and there’s not a lot of that kind of architecture around.”

Things are worse for Aeja Shin, who owns a 1,152-square-foot ground-floor unit at Brandywine.

Shin’s unit is not that much smaller than Nikitiuk’s, but she said her share of the proceeds is disproportionately less.

“Upstairs the units are a little bit larger than mine but there is a lot of money difference between my unit and theirs,” she said.

Neither Shin nor Nikitiuk sees the value of fighting the Brandywine sale in court because they believe that a court will not accept their complaints and that they will be out of pocket the tens of thousands of dollars that lawyers would likely charge. 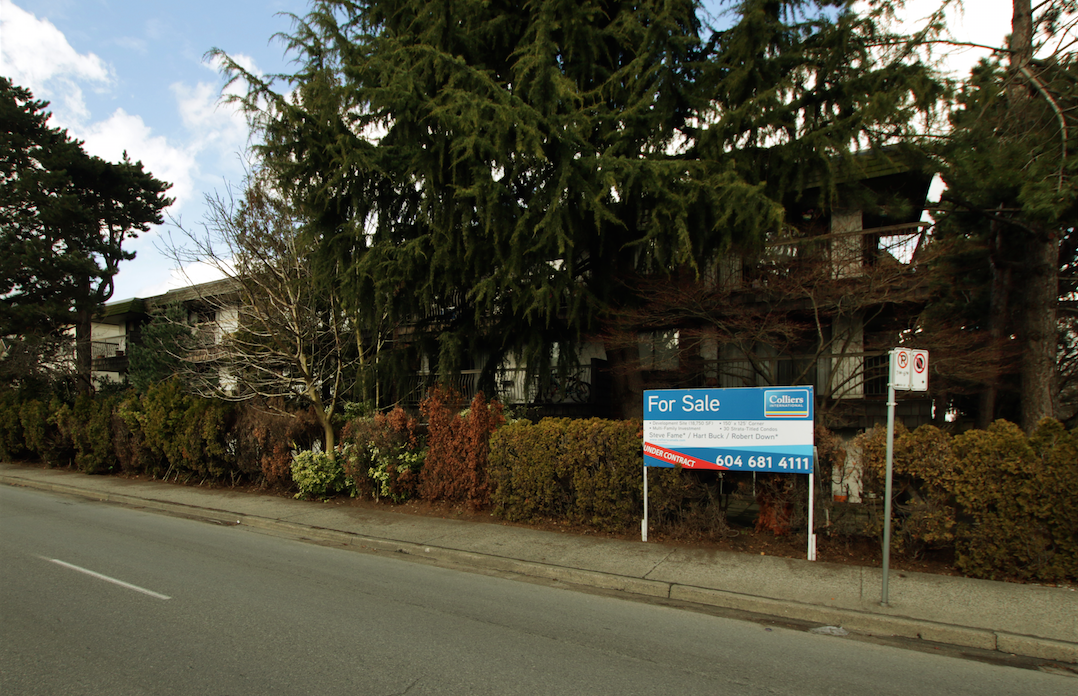 (B.C. Supreme Court is scheduled to consider the petition to dissolve the strata corporation for the Twelve Oaks development at 2777 Oak Street on March 20 | photo: Rob Kruyt)

Only two of the 30 owners voted to reject the offer in December. The case is now before the court for final approval and is set to be heard March 20, after two delays.

Because Twelve Oaks was built before August 1974, the method of dividing proceeds is based on assessed values, according to Lawson Lundell partner Peter Roberts, whose firm represents the owners.

That method of distribution prompted has four of the Twelve Oaks owners to appeal to the BC Assessment Authority that their property assessments were too low. 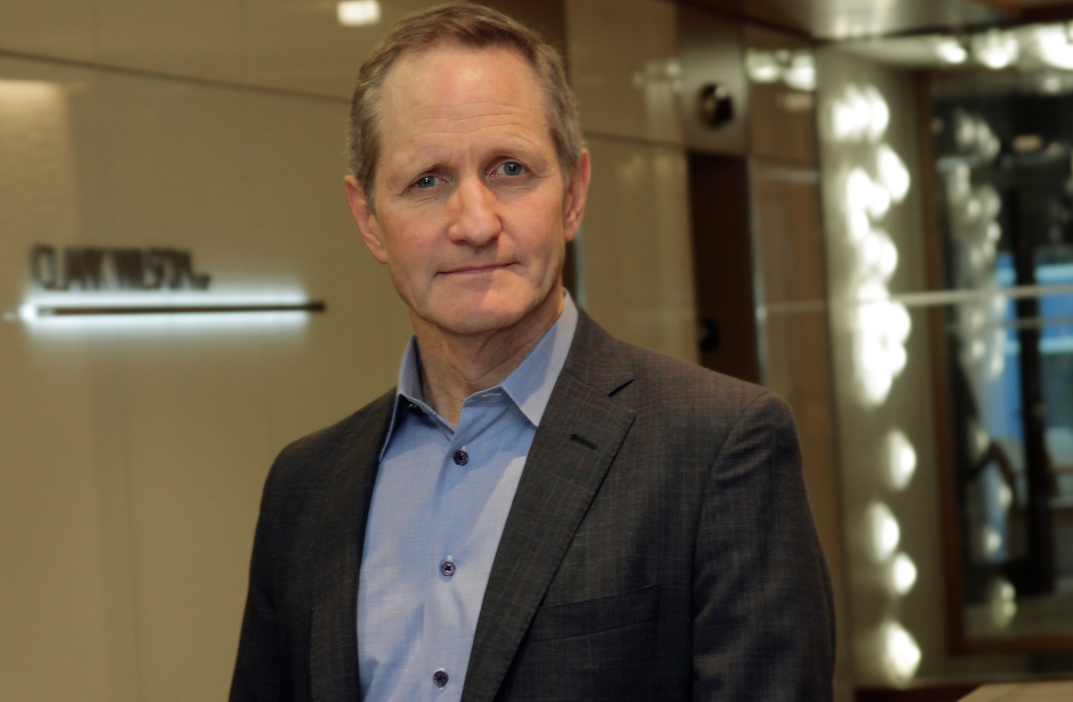 (Clark Wilson partner Darren Donnelly is one of many lawyers who are carving out a niche helping strata corporations navigate the Bill 40 wind-up process | photo: Rob Kruyt)

Panagiota Kravariotis, who has lived in the building for 22 years, told BIV she thinks the offer is “good” and that it will provide substantially more than her suite’s $567,000 assessed value.

Along with owners, realtors and lawyers similarly see opportunity from Bill 40.

“This will be work for about 15 or 20 years,” said Royal LePage Sussex Klein Group principal Eugen Klein. “There is lots of work out there.”

His staff is putting together six to eight presentations to strata corporations each month, and he is marketing more than a dozen properties. 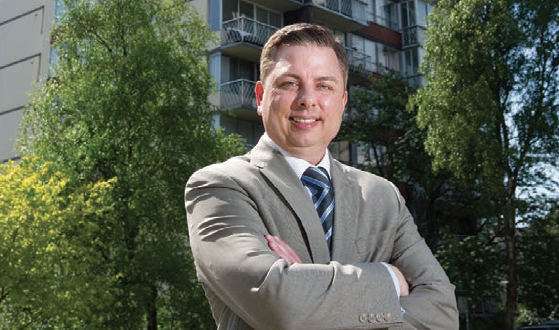 CBRE senior vice-president Lance Coulson has pivoted his practice to focus on helping those in aging condominium developments sell for the highest price.

(CBRE senior vice-president Lance Coulson has taken part on panels at real estate forums to explain how Bill 40 has made winding up a strata corporation much easier | photo: Richard Lam)

“I’m very active with Bill 40 windups right now,” he said. “I’ve branded and created an online business to deal with it. We’re probably doing two to three evaluations for stratas every week. I’m doing presentations to stratas every couple of weeks, and this is throughout the Lower Mainland.”

Countless other small firms and independent strata lawyers are similarly carving out specialties in strata windups. •