Vancouver International Airport (YVR) is the best airport in North America for the eight consecutive year, according to voters at the Skytrax World Airport Awards.

The airport also ranked as the 13th best airport in the world, according to a list of winners that were announced March 14 at an event in Amsterdam, Netherlands. YVR moved up one spot on that list from being No. 14 in 2016.

Winners were based on votes from approximately 13.8 million passengers.

It was Singapore’s Changi Airport, however, that won the big prize of the night as the best airport in the world for the fifth year in a row.

The next highest ranked North American airports were:

Vancouver Airport Authority spokeswoman Tess Messmer told Business in Vancouver in an email that she believes that the award showcases the strength of the Canadian airport system. 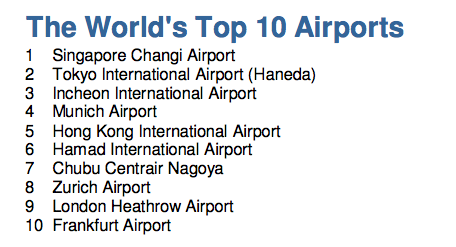 “This is of particular relevance right now with the Canadian Transportation Act review that has put forward a proposal to change the governance model of Canada’s biggest airports,” she said.

“If airports were to switch to for-profit models, we would risk losing the level of quality and service our airport has become internationally known for, making it very unlikely we would continue to be recognized globally with awards such as this.”

The federal Liberal government is expected in its March 22 budget to include a reference to their investigation into whether to privatize the country’s airports and reap what some reports pin as up to $16.6 billion.