By Glen Korstrom | May 8, 2017, 8:08am
Geoduck harvester Dave Thomas holds up a large geoduck that he has just captured | James Austin 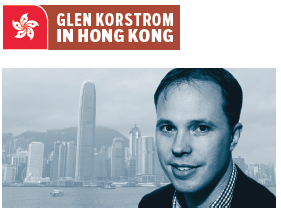 Paul Leung walks along the seafood counter of a Yata Supermarket in Kowloon and picks up a shrink-wrapped container with a small geoduck that is on sale for 128 Hong Kong dollars ($22.20).

The clam, with its distinctive, long siphon, has been freshly killed. The geoduck (pronounced “gooey duck”) was burrowing in a seabed off the west coast of North America a mere 48 to 72 hours earlier.

It’s a popular delicacy in much of Asia.

“Normally people go to a hotel restaurant to eat geoduck,” said Leung, a merchandise buyer for the eight-store Yata chain, which has locations across the Chinese special administrative region of Hong Kong. “To prepare it you have to dip it in really hot water and then have a good knife to cut it. So you really have to know how to process it.”

Diners also often consider geoduck to be a high-end item or for special occasions, so grocery-store sales are not as high as Leung would like.

The geoduck he is holding is from Washington state and was exported by Taylor Shellfish Farms, which owns B.C.’s Fanny Bay Oysters. It could just as easily have been from B.C., where the industry generates approximately $50 million in revenue for hundreds of B.C. harvesters.

Geoducks tend to like cool ocean water and a sandy seabed largely undisturbed by surf. That makes much of B.C.’s coastal waters an ideal environment for the species.

The price in the supermarket is at least double the $30 per kilogram that B.C. harvesters get paid.

Most Hong Kong residents who eat geoduck, however, tend to eat it at restaurants instead of buying it at a supermarket.

Geoducks harvested in B.C. are flown to Asia as live cargo and are often displayed wriggling in tanks at restaurants to demonstrate their freshness.

(Video: Watch the links in the supply chain between geoducks burrowing in sandy B.C. seabeds to getting to Asian consumers | Glen Korstrom)

Across town at the InterContinental Hong Kong hotel, executive sous-chef Simon Kwok is demonstrating a live B.C. geoduck next to some thinly sliced geoduck sashimi at Nobu – one of his hotel’s five restaurants.

The restaurant’s sushi bar features geoduck seasonally, he told Business in Vancouver. “It is always part of the buffet.”

Kwok said that when geoduck is not eaten as sashimi, it is usually served as part of hot-pot cuisine.

Although geoducks are quickly transported from the sandy seabed off Vancouver Island and other Gulf Islands across the Pacific Ocean to Asian dinner plates, there are several steps in the supply chain.

The industry started in the late 1970s, and for the first decade or so geoduck fishermen with a basic licence could harvest as many of the giant clams as they wanted. 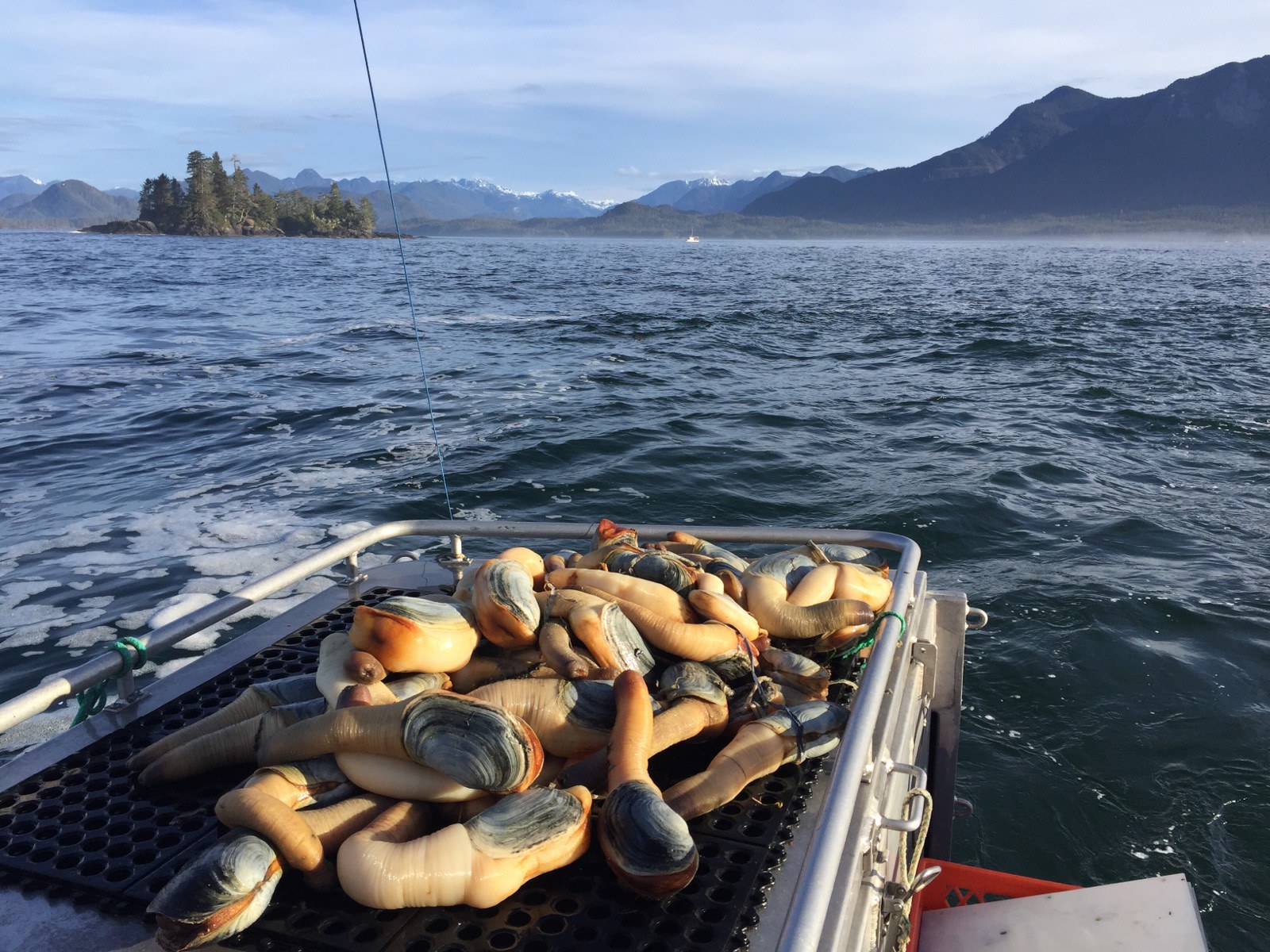 (Image: Geoducks like B.C.'s sandy seabed because there is relatively clean and cool water and sheltered coves | James Austin)

With the number of vessels harvesting geoducks increasing to 72 in 1979 from five at the start of the commercial fishery in 1976, the government stepped in to try to ensure the sustainability of the fishery.

A moratorium on new permits for commercial geoduck harvesting was instituted in 1979. Permits for 1981 were restricted to harvesters who landed more than 30,000 pounds in 1978 or 1979.

Geoducks became a licensed fishery in 1983. Licences were issued to vessels whose owners had marketed a minimum of 13,500 kilograms between 1978 and 1980.

Quotas per licence were introduced in 1989.

Each of the current 55 licences is divided into 10 blocks; each block allows a harvester to pluck 5,600 pounds of geoduck from the province’s seabed.

Licensees often allow others to harvest their allotment for a fee, or they pay harvesters to gather their quota. 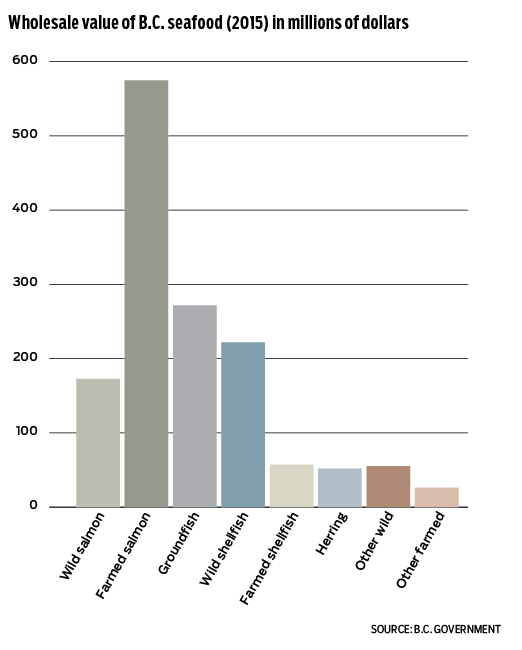 Some harvesters consequently have dibs on 10 blocks while others could have access to the quota for more than that, said James Austin, who is president of the Underwater Harvesters Association and owns Hideaway II Ventures Ltd.

“You originally had to buy the [licence],” said Austin, who has a 50% stake in a quota licence along with a partner. “It wasn’t a very big investment initially, but you had to demonstrate use and participation in the fishery. Without revealing my annual income statement, I’ll say that we fish some ourselves, and some we fish for a fee. Some of that is on long-term contracts and some of it is annually renewable.”

When Austin harvests geoduck, he heads out in his boat along with, usually, two other people. One person stays on board the boat while the other takes turns diving for geoducks.

Instead of using scuba gear, the divers plunge into the water with an umbilical hose to enable them to breathe. They also dive with a second cord, which has pressurized water.

Once on the ocean floor, the divers look for what Austin calls “dimples” – little indentations that indicate that there is likely a geoduck clam buried under that part of the sea floor.

“When you spy the dimple, you wash it a bit with the water and grapple your hand on the geoduck,” he said. 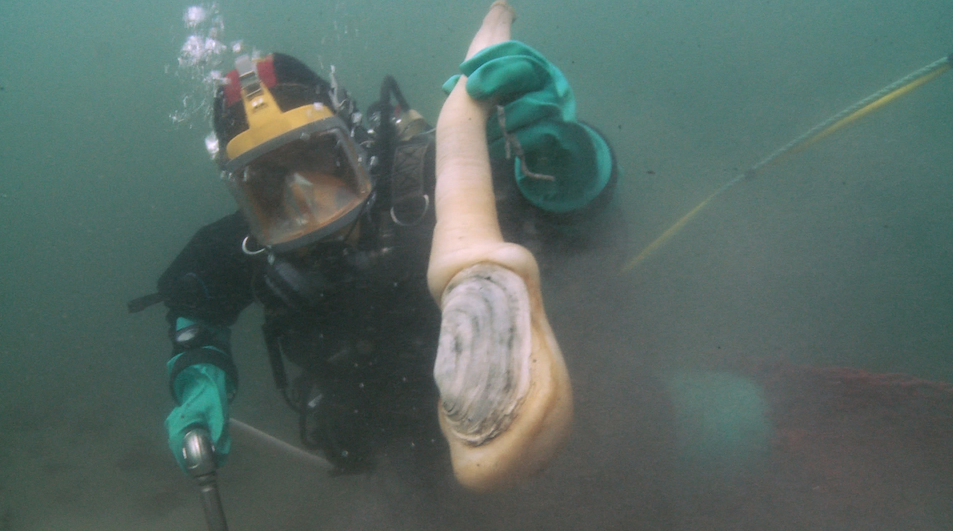 “You slowly wash the sand out around the geoduck and, eventually, it just pops out into your hand.”

Austin and his team harvest geoducks throughout the year and are busiest in the lead-up to the Lunar New Year. They never harvest without having a buyer lined up because, he said, “that would be bad business” and would likely lead to spoilage.

Once caught, geoducks are put in cages, which are slightly larger than milk crates and can hold up to 23 kilograms. The cages are trucked to Vancouver buyers, such as Pacific Rim Shellfish owner Ed Sang.

Sang operates the Granville Island fish market The Lobster Man, where shoppers can buy fresh geoducks as well as lobsters, oysters and other seafood from bins that are filled with water. He also supplies local restaurants and supermarkets. 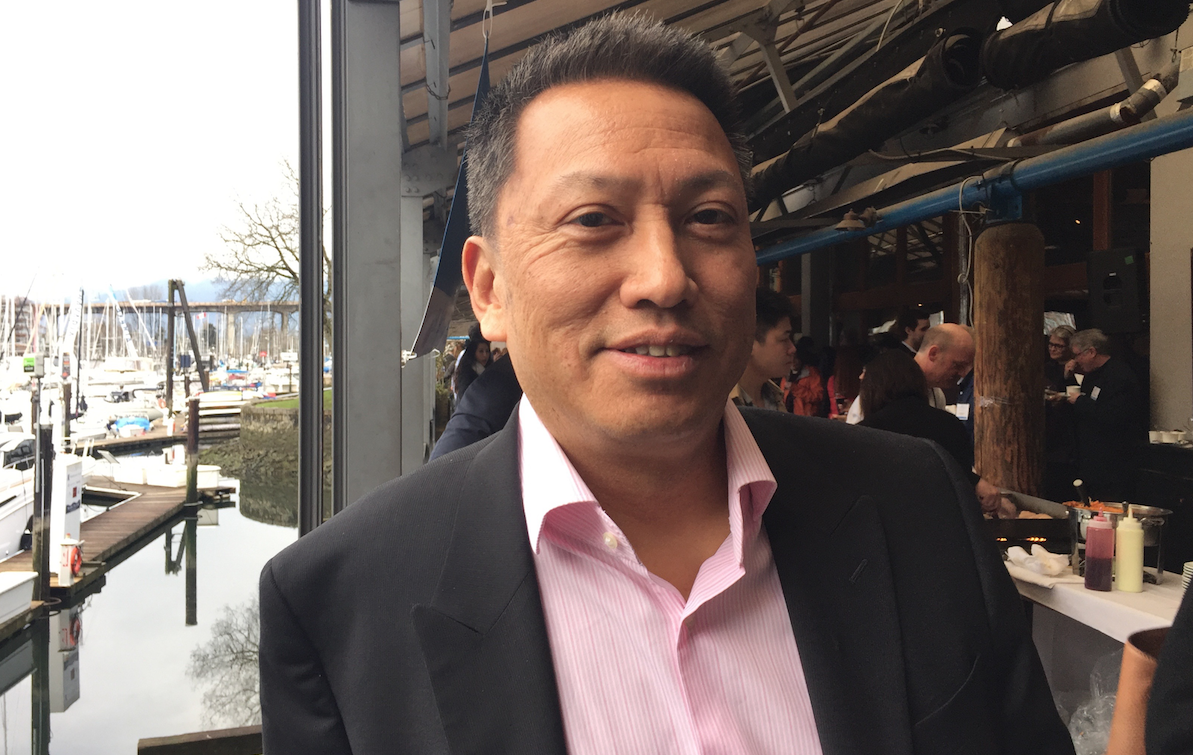 “I’d say that 50% to 60% of our sales are to Asia,” Sang told BIV on the patio outside Vancouver Fish Co. Restaurant and Bar on Granville Island.

The restaurant is holding a pre-launch event to draw attention to the June 8-18 B.C. Shellfish and Seafood Festival, in Comox. A series of cooking stations are set up to showcase B.C. seafood.

Sang said he sees a bright future in business-to-consumer sales.

He already sells seafood online on The Lobster Man’s website and on Chinese websites such as Gfresh.

“In China, people use e-commerce to buy a bottle of shampoo and have it delivered within the hour to their home,” he said.

“We feel that e-commerce is one area where B.C. seafood could really find a lot of growth because consumers want the convenience of being able to order something online and have it delivered to their house in a short period of time.”

The Canadian Food Inspection Agency (CFIA) has registered Pacific Rim Shellfish’s distribution plant and communicates with the company daily to give information on what parts of the province are open to various fisheries.

Geoduck harvesting areas can be susceptible to large blooms of toxic algae in sea water, known as red tide. 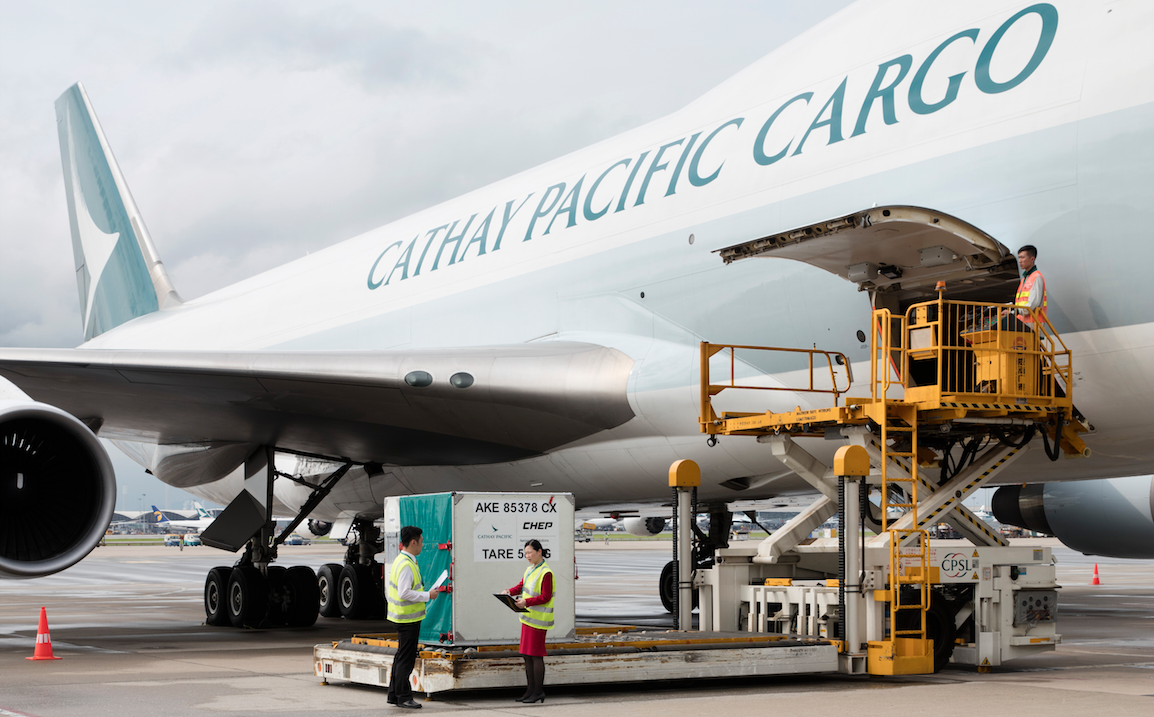 (Cathay Pacific flies non-stop between Vancouver and Hong Kong 17 times per week. That is up from 14 weekly non-stop flights before March | Cathay Pacific)

When a large outbreak took place in B.C. in 2015, many exporters lost geoduck shipments, but harvesters are usually able to tell when dangerous harvest conditions are present.

Pacific Rim Shellfish follows CFIA guidelines closely and is allowed to issue its own export certificates for products, thereby speeding up transport.

Geoduck, clams, oysters and other perishable seafood products are then trucked to the airport and loaded onto planes. One Cathay Pacific flight lands in Hong Kong at 5:44 a.m. and is popular for cargo because it lands so early in the morning and connects with flights to cities that have no non-stop link with Vancouver.

Worldwide Seafoods Ltd.’s warehouse in the Taikoo Shing neighbourhood on Hong Kong Island is a bustling centre with 40,000 square feet on three floors.

The ground floor is a maze of frozen-product containers and holding tanks filled with live seafood. Office workers toil on the second floor while a processing plant, where workers portion-cut salmon, is located on the third floor.

Trucks come and go, delivering products for the company’s 78 Hong Kong employees to sort and repackage.

The Vancouver-based company has been sending products to Hong Kong for decades.

“We were the first company to import geoducks into Hong Kong,” said sales director Merlinda Ng. 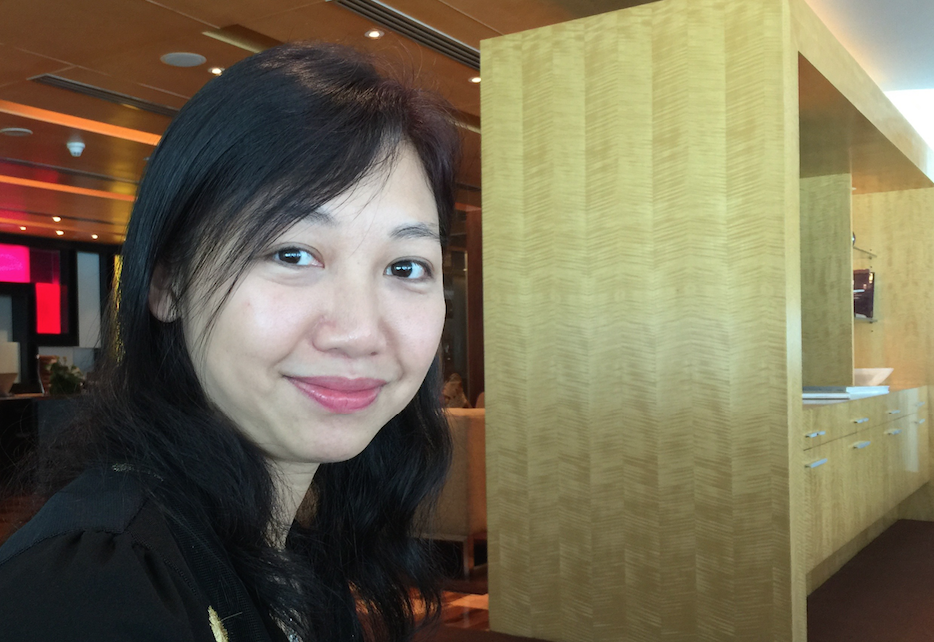 Ng told BIV that all of her company’s seafood imports must go through Hong Kong customs and that shipments can be randomly singled out for inspection.

In addition to checking for red tide contamination, screening is aimed at stopping any geoducks detected with high levels of cadmium.

After gaining a seal of approval, the clams can usually be trucked to Worldwide’s warehouse within 75 minutes. 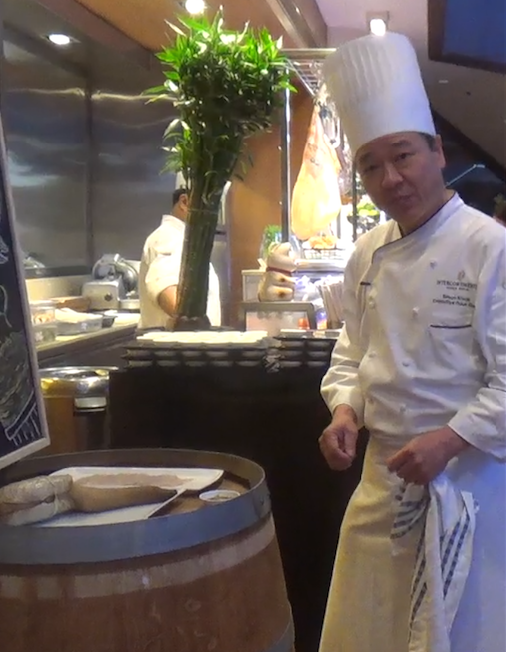 (InterContinental Hong Kong hotel, executive sous-chef Simon Kwok stands next to a display of geoduck sashimi at one of five restaurants in his hotel: Nobu | Glen Korstrom)

Frozen cooked lobster is the company’s top seller, although it also has strong sales of salmon and black cod.

Ng, however, estimates that Worldwide Seafoods sells about 66,000 kilograms of geoduck every year – about a quarter the sales that it has for lobster.

“B.C. geoduck is wild-caught and has a very good flavour,” she said.

“Mortality is also very low and you can maintain them for up to four days if you put them in the fridge.”

Hotel restaurants are Worldwide’s biggest customer segment and the company supplies about 200 hotels in the Hong Kong region, Ng said.

“Hong Kong is quite different in that whoever wants to eat good food, they will come to the hotel,” Ng said.

“In Europe or Canada or the U.S., if people want a good meal, they will go to a restaurant. Here, people see hotels as having good service and a guarantee of product safety, especially for a five-star hotel, so they come to hotels even if they are not staying there.” • 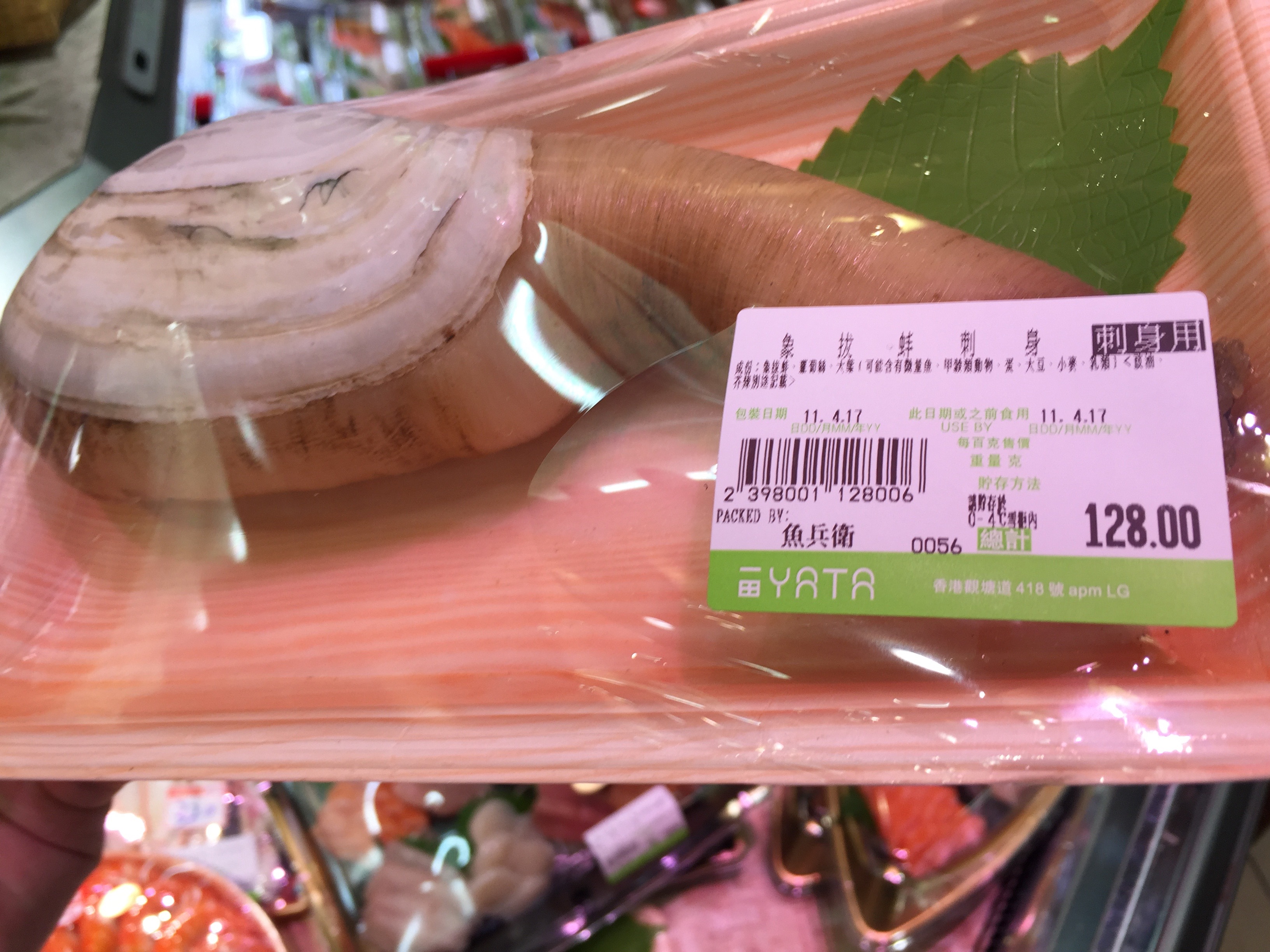