By Emma Crawford | May 11, 2017, 9:46am
Row houses in Richmond. A 1% increase in home prices in Vancouver has been shown to cause a 0.45% jump in prices in Richmond and Burnaby, according to the CMHC | Shutterstock

It is no secret that when home prices go up in the City of Vancouver, prices in other municipalities across the Lower Mainland will also grow.

According to a new report from the Canada Mortgage and Housing Corporation (CMHC), the rate at which prices in any given municipality will grow is measurable and consistent with commuting distance from the city.

In some cases, the resulting price increase, which CMHC calls the “spillover effect,” can take several years to set in, but this is not always the case; sometimes the effects can be immediate.

According to the CMHC, a 1% increase in Vancouver home prices has been found to cause an immediate 0.73% price jump for homes on the North Shore. In Burnaby and Richmond, prices have responded by increasing 0.45% within the same quarter. The farther the commuting distance from Vancouver, the lower the correlation (see Figure 1 below). 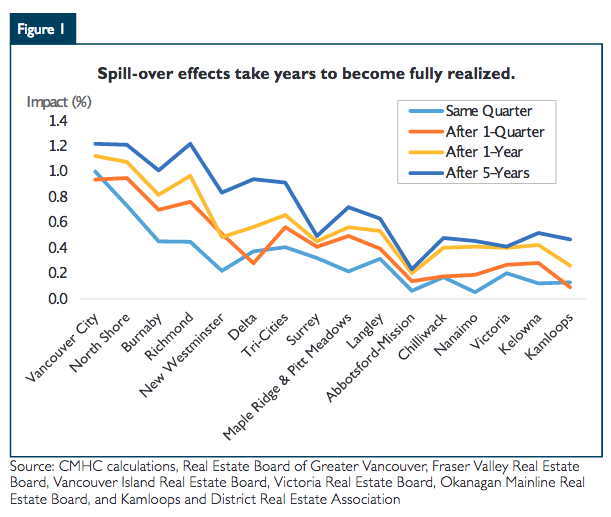 The effects have been shown to continue over the next several years. For example, that same 1% increase will, after five years, have caused an increase closer to 1.2% on the North Shore.

“For Burnaby, the link between prices was somewhat weaker. This is possibly due to the historically higher share of apartment sales in the Burnaby market as compared with Richmond and the North Shore.”

The CMHC found that prices in other municipalities across British Columbia that are not within commuting distance of Vancouver still see some of this spillover effect.

“Beyond commuting distance, the effect is similar, regardless of distance,” according to the report. “After five years, in places as far away as Kelowna, for example, prices were 0.5% higher than they would have been otherwise.”