By Glen Korstrom | June 15, 2017, 3:38pm
Council discussed liquor policy and voted on a host of changes at an all day meeting June 14 | Dan Toulgoet

Grocers who want to put B.C. wine on their store shelves will be out of luck in the city of Vancouver thanks to a June 14 vote at Vancouver city council.

Instead, the city will allow grocers to have liquor stores within their stores.

The liquor store option is not popular with grocers because it uses more square footage, will be subject to requirements that the store not be within a kilometre of an existing liquor seller and will not allow shoppers to combine food and alcohol purchases. As a result of those restrictions there are no such stores in B.C.

Overwaitea, meanwhile, has 13 of the 19 stores in B.C. in which there is B.C. wine on shelves. Real Canadian Superstore recently opened a sixth location in Westbank.

Affleck told Business in Vancouver after the evening vote that he supports grocers being eligible to put wine on grocery store shelves but the motion was worded in a way that allowed only one option: stores within stores.

“The alternative was nothing, right?” he said. “Then we wouldn’t have any allowable alcohol in stores. If grocers have a space and the licence, at least now they can attach a store.”

He said that he did not try to amend the motion to specifically allow B.C. wine on store shelves because he said he moved such a motion a couple years ago and it failed. 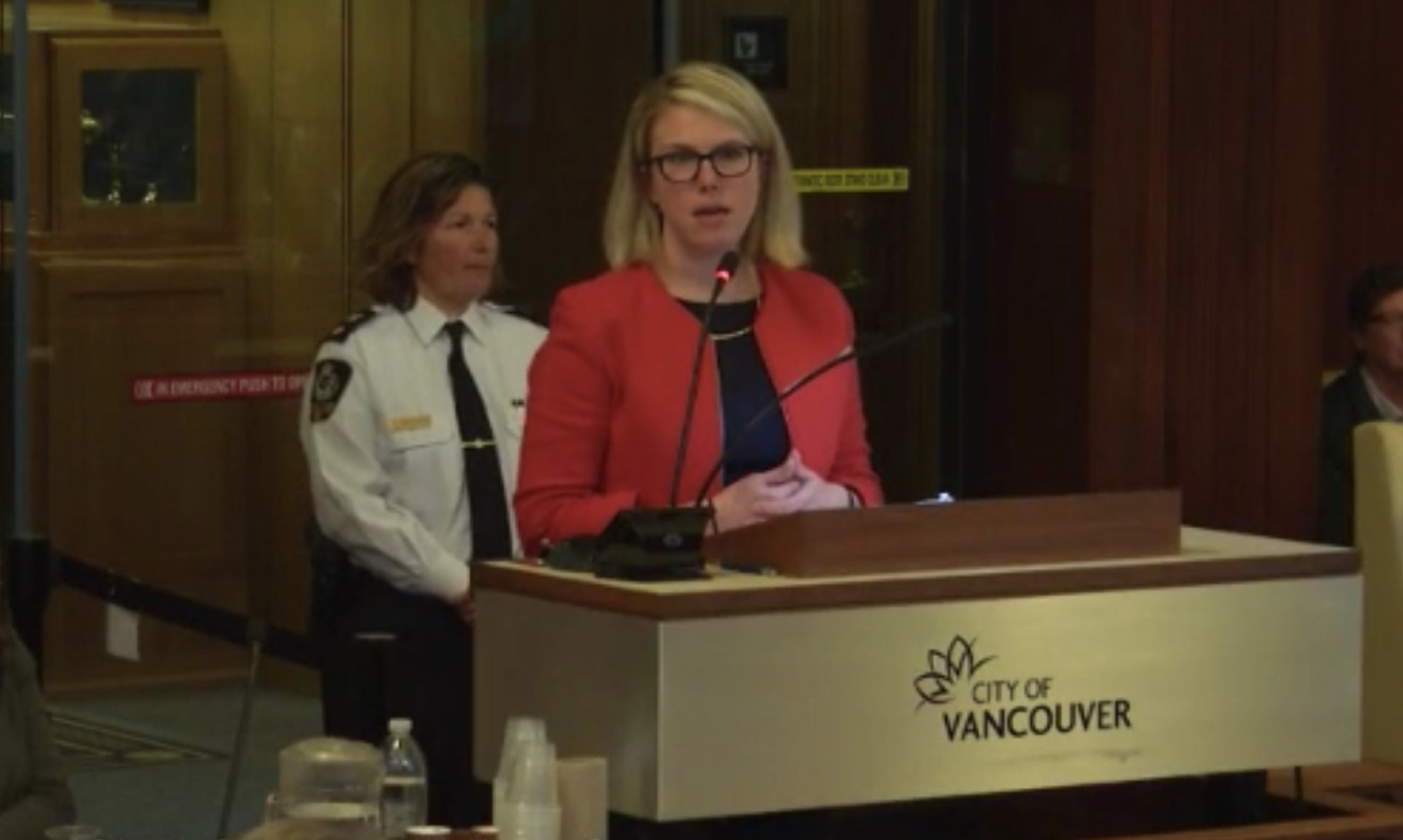 (Image: City of Vancouver general manager of development services, buildings and licensing,  Kaye Matheny Krishna, speaks while Vancouver Police Department superintendent Michelle Davie looks on. Both argued that wine should not be allowed on grocery store shelves because there would be increased access | City of Vancouver livestream)

Overwaitea president Darrell Jones told Business in Vancouver June 12 that he would like to sell wine on shelves at the Save On Foods store at the corner of Cambie Street and West 7th Avenue.

He stressed that the selection would be dramatically different from what is sold at the B.C. government store that is across the street and a block up Cambie Street.

“In a typical B.C. liquor store or private liquor store, they carry less than 10% of the wines - in many cases 5% of the selection of B.C. wines that we would carry in a store such as the one on West 7th and Cambie.” he said.

“It’s not even like we’d be competing. 90% of the products we would carry, no one else would have. If you have a favourite winery in the Okanagan and you can basically only get their wine in the Okanagan, we would offer an alternative. We would carry it in the store.”

Earlier in the day, councillors heard that polls show most Vancouverites want to be able to buy wine on shelves.

They also heard a slew of reasons why wine should not be sold in grocery stores. Those reasons include:

•people would drink alcohol more because buying wine would be more convenient and this is bad because of potential health problems that could result as well as potential crimes that drunk people may commit;

•entrepreneurs who own wine or liquor stores could have their businesses hurt;

•there would be a net increase in the number of retail outlets that sell wine in the city because the licences to sell B.C. wine on grocery store shelves could be moved from elsewhere in the province;

•there could be a clustering of retail outlets that sell alcohol because the B.C. government allows operators who own the necessary licences, which allow sales of B.C. wine on grocery shelves, to be within one kilometre away from the nearest liquor store;

•various governments around the world have filed trade-enforcement action against Canada at the World Trade Organization, arguing that B.C.’s law allowing sales of only B.C. wine in grocery stores goes against trade agreements. If Canada loses this battle, wines from all over the world could be sold in B.C. grocery stores;

•if children see wine being sold in grocery stores, they will believe that drinking alcohol is OK; and

•recovering alcoholics can avoid seeing alcohol sales by not going in liquor stores but would not be able to avoid seeing wine in grocery stores and therefore may relapse.