By Glen Korstrom | August 25, 2017, 1:03pm
Lush North America CEO Mark Wolverton is so busy expanding the size of existing outlets that he doesn’t have the resources to open new stores | Lush North America

As declining mall traffic and increasing e-commerce cripple sales for many retailers and force others to move into smaller locations, Vancouver-based Lush North America is busy expanding its stores.

The chain’s CEO, Mark Wolverton, has raised Lush’s store count to 250 (53 in Canada) from 177 in 2013 and is now focusing on increasing the size of as many of his stores as he can to accommodate their sales volume.

Lush’s revenue more than tripled to $692 million in 2017 compared with four years ago. According to Wolverton’s data, the private company’s same-store sales increases have been, on average, in the double-digit percentages.

“We’re on track to do 60 projects a year now,” he told Business in Vancouver. “About 40 of those are relocations to larger spaces and about 20 are existing-store refits – fixing them up so they can last a few more years until we move them.”

His most recent expansion was at 1020 Robson Street, where the Lush store expanded to 2,800 square feet from 1,400 by taking over space to the east, which was a Danier Leather Inc. store.

Wolverton wants to move Lush into a larger, 2,500-square-foot store at CF Pacific Centre. That is more than double the chain’s current 1,100-square-foot location in the mall.

Renovations have already started at Guildford Town Centre, where Lush is moving into a 3,000-square-foot location; its current store in the mall is 800 square feet.

He has started to supply staff with mobile point-of-sale (POS) pods to use when lineups are long. Store renovations also include tables or shelves that can be pulled out from behind counters so customers have somewhere to place their purchases while mobile transactions are being completed. 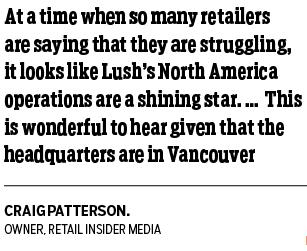 Wolverton said the average Lush store is currently 800 square feet and generates about $2.2 million in annual sales. The average transaction, he said, is $35.

For a store like the one at Pacific Centre, which is open 69 hours a week and every day except for Christmas Day, those numbers translate into 17.51 transactions per hour or close to one every three minutes.

He believes that some of the chain’s bricks-and-mortar success stems from customers’ desire to touch and smell the products and from Lush employees’ ability to upsell them by suggesting products based on skin conditions and hair colour.

“At a time when so many retailers are saying that they are struggling, it looks like Lush’s North America operations are a shining star and are indeed incredibly productive and quite successful,” Patterson said.

“This is wonderful to hear given that the headquarters are in Vancouver.”

Lush employs 1,000 staff in Metro Vancouver, 296 of whom are at the company’s head office.

Another 573 work at Lush’s West Coast manufacturing centre, which is in about 300,000 square feet in several buildings south of Marine Drive.

The seven stores now employ approximately 131 workers in Metro Vancouver, but that number is expected to increase significantly as the Christmas season nears. 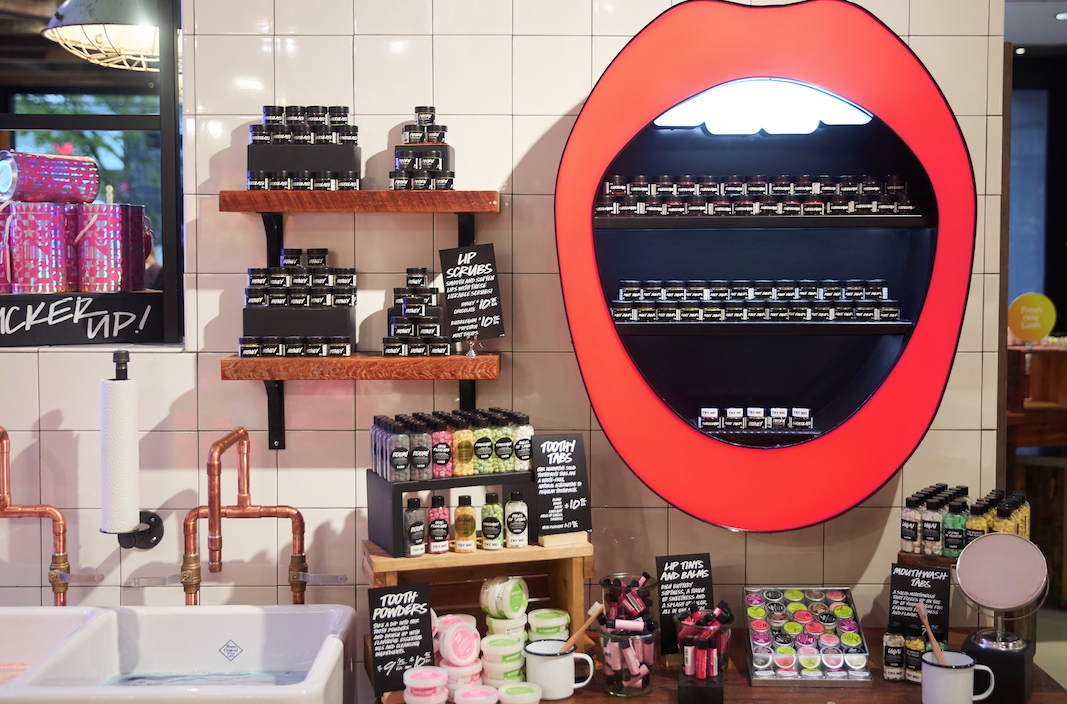 (Image: Toothpastes, mouthwashes and lip balms are some of the products that Lush carries | Lush North America)

Lush employs about 7,500 people across North America, Wolverton said, adding that at the height of the Christmas holiday season, that number swells to around 14,000.

Wolverton and his wife, Karen Delaney-Wolverton, own a 50% stake in the company; London, England-based parent company Lush Ltd. owns the other 50%.

That structure was the Wolvertons’ idea, in 1996, when they discovered the then-year-old, single-store Lush Ltd. and negotiated with its principals to allow them to take the company to North America.

“I wanted them to have a vested interest in whether we survived or not,” Wolverton said.

Lush Ltd. has similar partnerships in other parts of the world, and the company has 934 stores in 49 countries, according to Wolverton.

“We’ve always used internal cash flow to build the business,” he said. “We never used bank borrowing or anything like that. It gives you an idea of how fast the money spins.”

Expanded stores now cost Wolverton roughly $850,000 to build because they require complex plumbing for sinks to show off Lush’s many bath products.

New stores usually pay off that construction cost back within two years, he added.

“When I go to shopping-centre conventions, I’ll get landlords who say, ‘We’ll build your store and pay for it. Just come to our mall and run it.’ But we can’t take advantage of that,” Wolverton said.

“We simply don’t have the bandwidth, in terms of resource staff, to build the furniture we would need to open those stores while also relocating the ones that we have at the same time.”•