Vancouver ranks No. 6 to buy a condo and No. 8 to buy a single-family home in new global study

A Century 21 survey has confirmed what countless other surveys have already established: Vancouver is a pricy place to buy residential real estate but prices still pale to those in Hong Kong.

The real estate company’s September 27 survey, however, is a lot more extensive than some of the others.

Unlike the annual Demographia analysis, which ranks housing affordability by using a multiple of the average resident’s income and only includes nine countries, the Century 21 survey includes 74 cities, or parts of cities, in 29 countries and it compares the total cost in Canadian dollars.

Vancouver ranks as the sixth most expensive place among cities studied to buy a condo, according to the study, which pins the cost of a Vancouver condo at $1,172.80 per square foot.

When it comes to single-family homes, Vancouver ranks No. 8, with the cost being $824.47 per square foot.

The Hong Kong region predictably ranks as the most expensive area in the world to purchase property.

The average single-family home in Hong Kong’s Kowloon area is priced at $3,570.23 per square foot, according to the study.

The Century 21 study ranked Hong Kong Island ($3,254.71 per square foot) and the New Territories ($1,327.50 per square foot) part of the Hong Kong special administrative region as the next two most expensive places to buy a single-family home.

To get a sense of how expensive homes are in Hong Kong, Kowloon’s cost for a single-family home is about 3.5 times more expensive than Beijing, which ranks No. 4 in the study, at $1,005.31 per square foot, and is the most expensive place to buy a home outside of the Hong Kong special administrative region.

Here are some of the priciest cities in the world to buy real estate, according to Century 21 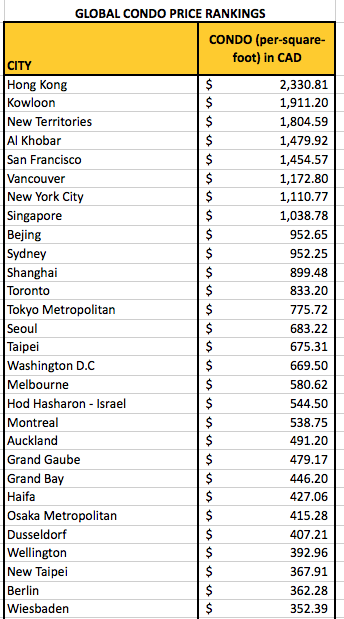 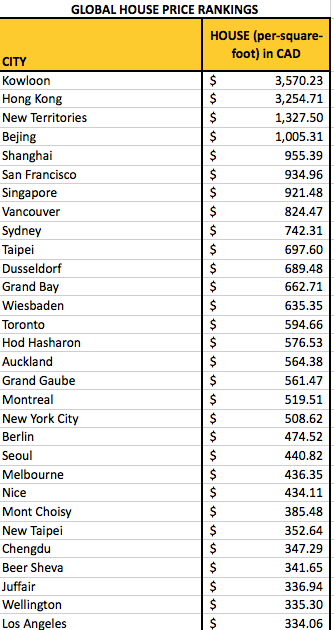