By Patrick Blennerhassett | October 23, 2017, 11:30am
The City of Surrey’s planned LRT line will have two lines with approximately 19 stops and stretch 27 kilometres | Submitted

City of Surrey Coun. Tom Gill spoke those words while sitting in for Mayor Linda Hepner during a recent meeting of TransLink’s Mayors’ Council on Regional Transportation.

After the meeting, he was just as clear about the urgency with which the City of Surrey views the area’s development of rapid transit.

Gill said the city is waiting on word from the new coalition provincial government as to what technology will be used for Surrey’s rapid transit project, saying that’s what is “holding us from getting out of the starting blocks.”

However, he added, it will likely be light-rail transit (LRT) consisting of two lines, and not a SkyTrain extension down the Fraser Highway.

Gill also noted he’s got word from the federal government that Ottawa is “anxious” to make some announcements about major transportation infrastructure projects across Canada.

“The [Mayors’ Council] have been very clear, and they’ve made their technology choice,” said Gill, noting however that the final decision will fall to the provincial government. “When you look at an extra billion dollars plus to convert LRT to SkyTrain out to Langley – with that extra billion dollars can you justify it?”

According to the City of Surrey’s website, its LRT project would potentially have 27 kilometres of track spread out between two lines, 19 stops and a $2.1 billion price tag.

“I know from Langley’s perspective, down Fraser Highway is our main concern,” Pachal said. “So whatever the City of Surrey does for King George and 104 [Avenue], that’s up to them.”

The proposed LRT lines have gone through extensive public consultations dating back to 2010 when TransLink held a South of Fraser Rapid Transit public stakeholders meeting. In 2014 the Mayors’ Council endorsed LRT for Surrey, and in February of this year TransLink and the City of Surrey conducted a third stage of public engagement, the first since 2011.

In March, the federal and provincial governments verbally committed to partial funding for the so-called 10-year vision for Metro Vancouver transit and transportation. This was part of the federal government’s intention to raise its stake in transportation infrastructure from its traditional one-third funding contribution to one-half for proposed projects across Canada. The funding announcement included $616 million to the Mayors’ Council, of which $99 million was earmarked for pre-construction planning and consultation for the proposed Broadway subway in Vancouver, and $58 million for Surrey LRT planning.

Surrey received design funding from TransLink in November 2015 and has since released composite renderings to the public. Gill said he could foresee a future where Surrey and Langley have both LRT lines and a SkyTrain extension line.

Daryl Dela Cruz, a Kwantlen Polytechnic University student, has been campaigning for a Surrey SkyTrain extension and has collected a petition with approximately 2,700 signatures.

Dela Cruz said one of the biggest arguments against Surrey’s proposed LRT line is that unlike “the three largest light-rail sections in Canada,” it has no underground tunnel portions.

There are also “inconsistencies” in the city’s vision as to what its LRT will look like, Dela Cruz said. 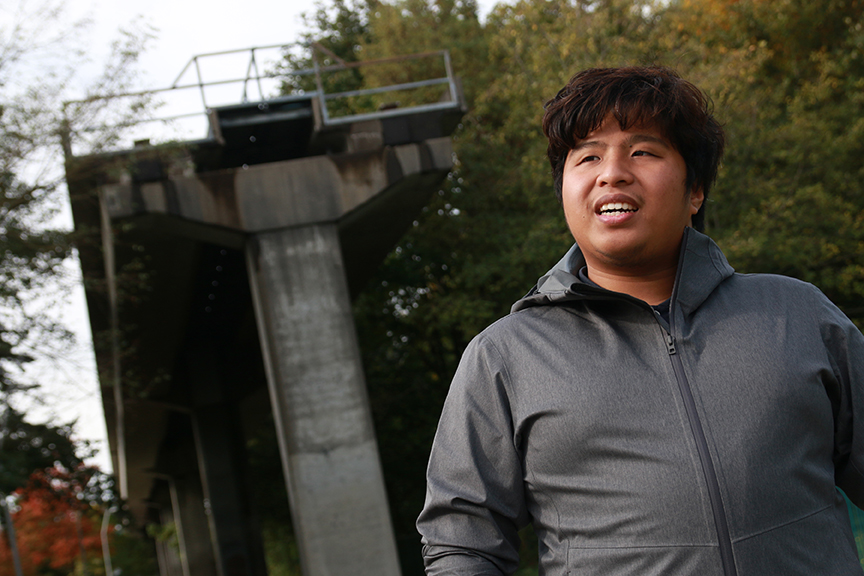 Daryl Dela Cruz, who has led a campaign against Surrey’s planned light-rail transit line, said a SkyTrain line extension is a better idea for the Fraser Valley | Rob Kruyt

Gill said there is a potential for some portions of the proposed LRT lines to be underground and there is “significant merit” for looking into it, but the design element has not been finalized. Gill added that the most likely spot for an underground portion would be around 104 Avenue.

Pachal said that ultimately $1 billion, which is the estimated extra cost of building SkyTrain instead of LRT in Surrey, will likely be the deciding factor in the transit debate.

“If money were to fall from the sky people would choose SkyTrain – at least down the Fraser Highway,” he said. “But we live in a constrained world.”