What wiped $1.3 billion from Teck’s market value in one day?

Company says it will have to make up for inventory shortfall with increased sales of non-premium coal, dragging down average price in fourth quarter

The metallurgical coal business of Teck, also a major copper and zinc producer, accounted for 72% of its gross profits during the first nine months of the year.

Operationally Teck’s coal business has been humming. The company said its coking coal unit moved a record of 79 million bank cubic meters (BCM’s) during the quarter.

The company said average realized steelmaking coal prices for the first nine months of the year came in nearly $100 above last year’s price at $178 per tonne. With forecast unit cost of sales in the range of $49 to $53 per tonne for 2017, met coal should continue to be a cash cow for Teck. A major water management capex project in the Elk Valley would add $6 a tonne – from 2023 onwards.

So what set off investors who in more than three times the usual volumes marked the share down 9% on October 26, wiping some $1.3 billion off its value in New York?

Teck said it expects a larger proportion of its coal sales in the fourth quarter to be non-premium coal, due to “a shortfall in planned raw coal inventory” which will reduce its average realized price relative to the benchmark to roughly 85% during the fourth quarter. That compares to an average of 94% from 2014 to 2016.

Teck stresses that it would be a “one-time only” shift and it will “transition to a more traditional product mix going into 2018.” There is also a chance that premium quality coal could in fact make up a great percentage of the mix following the closure of its Coal Mountain mine in British Columbia next year.

The company also said that the rolling average for the current quarterly price index is $194 a tonne (which translates to a still respectable $165 a tonne when accounting for Teck’s coal mix in Q4). The spot price for FOB Newcastle premium coking coal was $177.90 a tonne on Thursday. Teck says about 40% of its sales are negotiated on a quarterly contract basis and the rest are linked to the spot market.

At $12 billion following today’s fall, Teck shares are only worth 4% more in New York than at the start of the year so perhaps investors are taking a too harsh view of the black stuff.

And its worth remembering that the average zinc price is 42% higher year to date and the company lifted its zinc production outlook for the year by 50,000 tonnes today. Copper prices are up 26% and the company lowered its cost guidance to $1.30–$1.40 a pound.

Teck also received approval for a share buyback program earlier this month and the Canadian dollar has been sliding and is projected to fall to $0.75 against the USD next year after peaking at $0.82 last month. 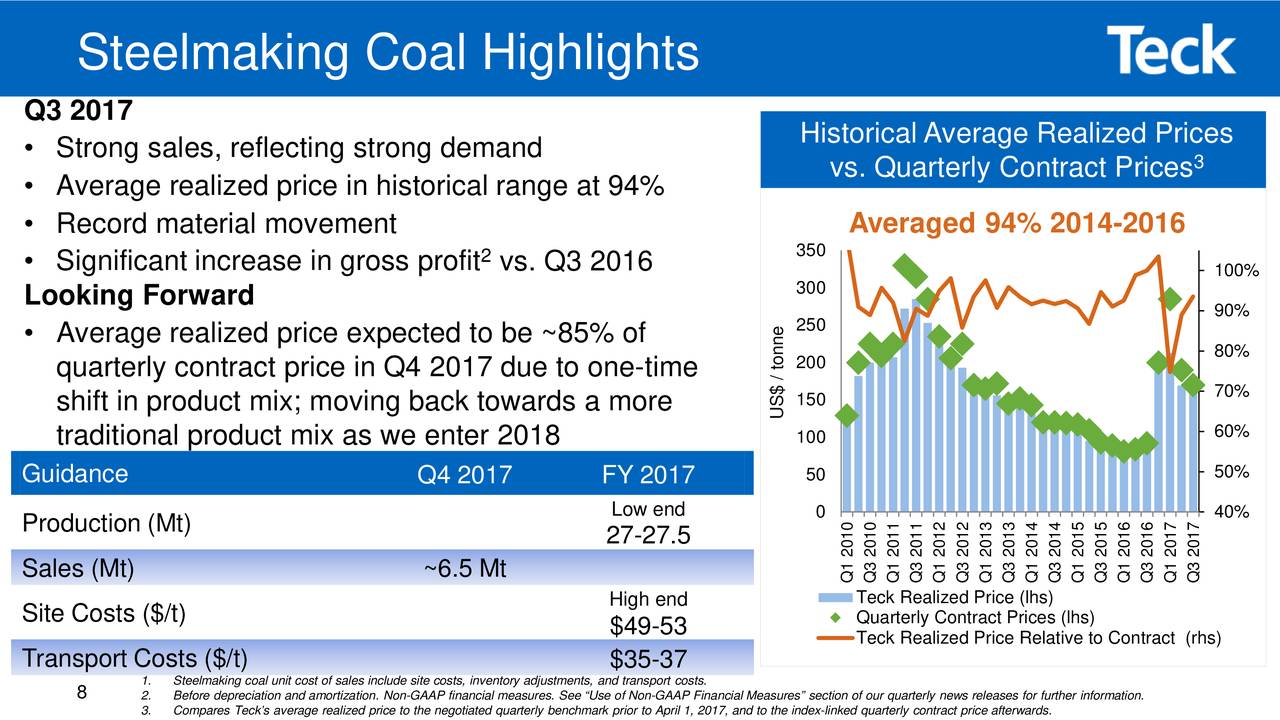