Vancouver has reached unaffordability levels not seen since the early 1990s

Vancouver’s housing market has reached unaffordability levels not seen since the early 1990s. However, market prices are expected to cool in the next year, according to the Housing Affordability Monitor published by the National Bank of Canada.

“The Toronto and Vancouver housing markets are particularly more sensitive to rising interest rates compared with other cities,” National Bank economists Matthieu Arseneau and Kyle Dahms said in a report. “This means that those markets are poised to experience home price declines in 2018.”

According to the Housing Affordability Monitor, rising interest combined with greater barriers to qualify for uninsured loans will leave markets poised for falling home prices.

Last week, the Canadian banking regulator, the Office of the Superintendent of Financial Institutions (OSFI), announced proposed changes to the qualifying criteria for uninsured mortgages.

Insurance is required for mortgages with small down payments, typically of less than 20%. Potential homebuyers are able to apply for an uninsured mortgage to avoid insurance premium costs from being added to their mortgages. The changes mean that homebuyers will need to meet stricter qualifying criteria regardless of the size of their down payment.

Ajay Soni, president of the Canadian Mortgage Brokers Association, said the proposed changes by the OSFI will have a broad effect on the housing market.

However, Soni is not as confident as the National Bank of Canada that one of those effects will be falling home prices.

“I’m not sure you will see a significant price decline,” said Soni. “In the first half of next year you might have some softening but it will be the second half where you will be able to evaluate that to a greater extent.”

The stricter requirements will make it more difficult for people with better credit ratings and larger down payments to qualify for an uninsured loan.

The changes may erode confidence in the market and real estate values because homebuyers with large down payments will have a more difficult time finding mortgage financing, Soni said. 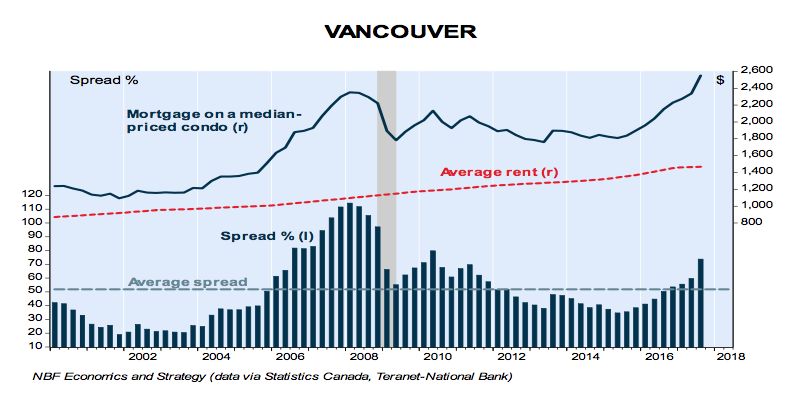 His skepticism about the prediction that Vancouver housing prices will fall comes from what he and other brokers see as a lot of pent-up housing demand.

“There’s no doubt that there are people who want to buy and there’s still a lack of supply,” said Soni.

Prices of Vancouver dwellings have risen by 5.5% in the third quarter of  2017 over the second quarter, more than five times the growth experienced in Toronto and more than double the growth in Montreal. While Vancouver had the greatest quarterly increase in housing prices, it had a lower than average year-over-yearhousing price increase of 9.3%, far below Toronto’s 21.7% and Victoria’s 15.9% year-over-year average home price increases.

Arseneau and Dahms expect a cumulative increase of roughly 100 basis points, or 1%, for five-year mortgage rates over the coming year. This is largely because of the Bank of Canada’s stated intention to continue increasing interest rates. According to Arseneau and Dahms, in the late 1990’s, a 1% increase in mortgage rates would have caused the national affordability measure to drop by 3.5 percentage points. Today, the same increase to mortgage rates would cause the national affordability measure to drop 5.6%, an additional 60%.