Marriott International Inc. (Nasdaq:MAR) is letting hotel owners know that it is interested in opening several new luxury hotels in Vancouver even though the company just opened two luxury hotels in the city’s downtown core.

The world’s largest hotel company owns 30 different hotel brands and several of its top brands would be a great fit for Vancouver, according to Marriott Canada president Don Cleary.

“We’re still looking to grow,” he told Business in Vancouver in a lounge at the company’s month-old, 188-room Douglas Autograph Collection hotel at the Parq development.

“Vancouver is a good hotel market. This can support quality luxury hotels. So for me, W, Ritz-Carlton and St. Regis would be three brands we’d love to bring to the market.”

Marriott, however, might have difficulty bringing the St. Regis brand to the region because a local company owns and operates the 65-room St. Regis Hotel at 602 Dunsmuir Street.

General manager Jeremy Roncoroni told BIV that the hotel’s owner also owns the St. Regis brand for the Lower Mainland because it has operated the Dunsmuir Street St. Regis hotel since 1913. He added that representatives of the global St. Regis brand lost in court many years ago when it tried to strip the hotel of its name.

Ritz-Carlton representatives have long been interested in opening a hotel in the region.

In 2007, Vancouver’s Holborn Group planned to bring the Ritz-Carlton to Vancouver by locating it in the Arthur Erickson-designed building that is now Holborn’s Trump International Hotel & Tower Vancouver. The global economic downturn sank the Holborn–Ritz-Carlton partnership and caused a multi-year delay in getting a brand for that project.

W Hotels and Resorts representatives have not previously floated the idea in public of opening a property in Vancouver, but it could be a wise move, according to hotel industry analysts.

Not only have Metro Vancouver hotels been increasingly filling their properties with guests, but they have also been able to charge higher average room rates, said CBRE Hotels director David Ferguson. 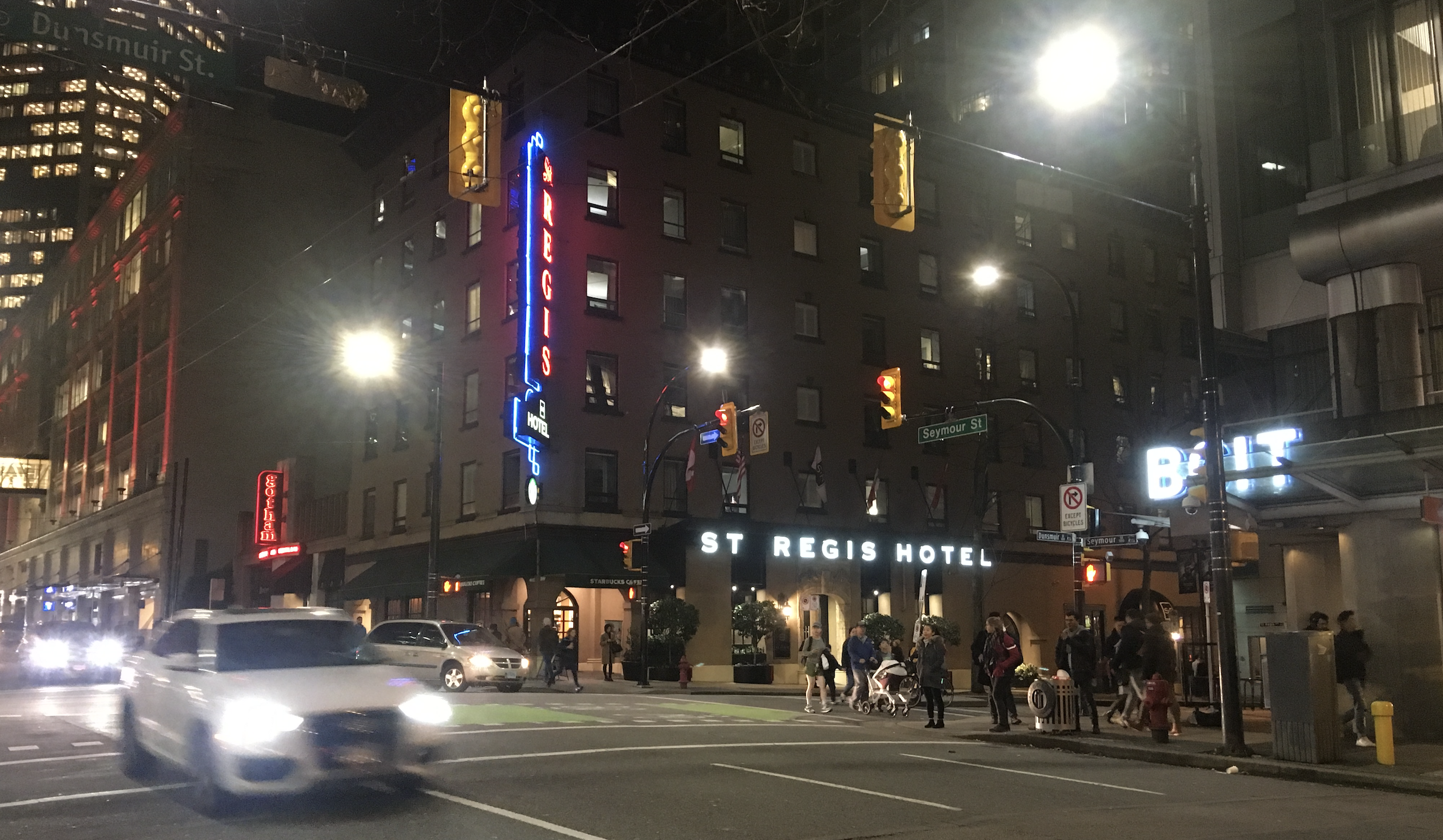 (Image: Vancouver has had a St. Regis hotel since 1913 - long before the global St. Regis brand gained its stature | Glen Korstrom )

“The performance growth in the hotel sector in Metro Vancouver overall has been fantastic,” Ferguson told BIV.

“I’ve been here since 1991, and I haven’t seen three years in a row with this kind of growth.” 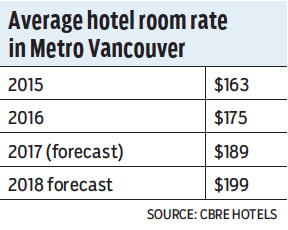 “A lot of the performance improvement the last three years can be attributed to room-rate growth,” he said.

“The room-rate growth demonstrates that there is a willingness to pay more to stay in Vancouver. If you historically stayed in a three-diamond hotel and expected to pay $150 a night, three years later, you might be paying $185 a night for a three-star room.”

Someone paying an average of $250 per night for a luxury hotel three years ago is likely paying more than $400 per night today, he said.

Marriott’s eagerness to expand its luxury-hotel presence in Vancouver follows the chain opening its Douglas hotel and an adjoining 329-room JW Marriott hotel on October 23. 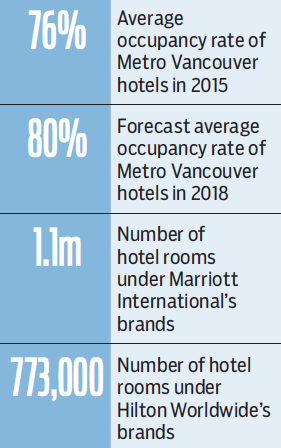 Growth has also come from consolidation.

The company then executed its US$13 billion mega-merger with Starwood Hotels & Resorts Worldwide in 2016, and, with 1.1 million hotel rooms, passed Hilton Worldwide’s (NYSE:HLT) approximately 773,000 hotel rooms to become the globe’s largest hotelier.

About 75% of the Canadian hotels that carry Marriott brands are franchised, meaning that the owner of the hotel has decided not to do the management.

The hotels that Marriott manages tend to be larger hotels and properties that have owners who do not have expertise in management.

In Metro Vancouver, those hotels are the new Douglas and JW Marriott hotels as well as the Westin Bayshore, Delta Vancouver Downtown Suites and the Marriott Vancouver Pinnacle Downtown. •