BCLDB lags behind other provinces by not offering online shopping

By Glen Korstrom | December 1, 2017, 2:47pm
New District owner Jay Garnett expects to soon be able to promise delivery to parts of Vancouver within an hour of receiving an online order | Rob Kruyt

British Columbians are increasingly shopping online but when it comes to buying alcohol through e-commerce websites, the only options are to buy from private retailers.

The largest liquor retailer in the province – the British Columbia Liquor Distribution Branch (BCLDB) – stays stuck at the starting gate with no clear plan for when its e-commerce sales will start. It told Business in Vancouver in a statement that it is “in the process of reviewing business requirements and laying the necessary IT foundations to enable [e-commerce].”

The Liquor Control Board of Ontario (LCBO), in contrast, launched e-commerce sales in July 2016. It reported in its 2016-17 fiscal year results that it generated a modest $4.4 million in online sales during the next eight months – a tiny fraction of the $5.89 billion in revenue the LCBO brought in during the full fiscal year. Quebec’s provincial liquor authority, the Société des alcools du Québec, also has e-commerce.

Private retailers in B.C. have been pioneers in e-commerce sales since around the turn of the century, when Marquis Wine Cellars defied the law by launching an e-commerce website, owner John Clerides told BIV.

“It was against the law, by the liquor board’s standards, because we weren’t allowed to advertise,” he said.

Clerides’ e-commerce sales now represent about 10% of his business.

Clerides’ store delivers across B.C. and can take the better part of a week to get wine to homes in smaller communities. For those who live downtown or are on the west side of Vancouver, deliveries can be on the same day, he said.

The most ambitious private retailer for beer, wine and spirits is likely New District CEO Jay Garnett, who is aiming to have half of his sales come from e-commerce within three years.

Garnett launched an e-commerce platform in 2015 for wineries to use for a flat fee.

“We had, obviously, approval from the Liquor Control and Licensing Branch to do what we did but they changed their mind and said, ‘No, you can’t do it,’” Garnett said of having an e-commerce platform but not a physical store. 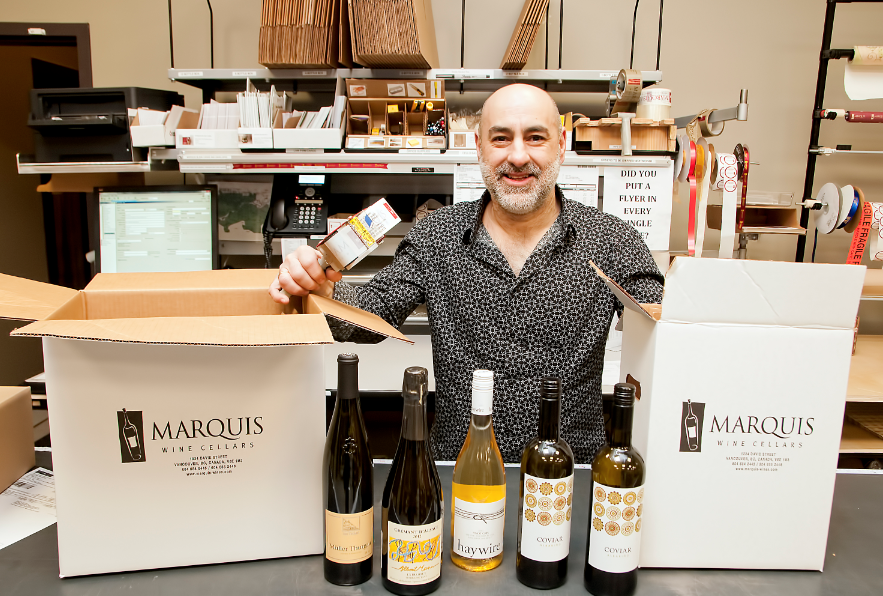 (Marquis Wine Cellars owner John Clerides launched his e-commerce website around the turn of the century, when the provincial liquor control and licensing branch believed that such a site was illegal | Chung Chow

“The way the government sees it is, if you have a store, you can have a website. They don’t understand the difference between a website and an e-commerce platform and, to be honest, most people don’t.”

Garnett bought Dunbar Liquor Boutique in 2016 and rebranded the store, which is near the corner of Dunbar Street and West 41st Avenue, as New District.

“The store is one of the fastest-growing stores in B.C., by percentage,” he said. “About 10% to 15% of sales are currently from e-commerce. We expect this to be more like 20% within the next year and believe 50% [is feasible] within three years.”

Garnett has upped his marketing budget, focusing on digital advertising and search engine optimization – something that has fuelled a surge in traffic in the last two months, he said.

As with Marquis Wine Cellars, New District has free shipping for orders valued at more than $200.

Store staff make local deliveries. People who receive the shipments must show proof of age and not be intoxicated while receiving the shipment.

“Within the Lower Mainland, deliveries are now within a day or two,” Garnett said. “We’ll make a delivery at your convenience. If you’re within a certain radius of the store, we can actually deliver within a couple hours. We will be the first ones to offer delivery within an hour. We’re still working on the technology.” •